Does Anyone Listen To Dick Cheney Anymore? 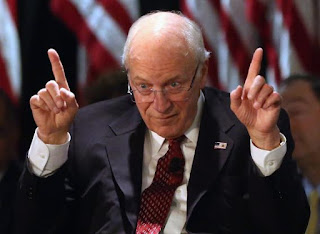 Speaking at a Republican dinner in Wyoming recently, Dick Cheney opined that President Obama's national security personnel choices were "dismal." He was particularly offended by Obama's choice of Chuck Hegal to run the defense department. That's Chuck Hegal, who was being wounded in Vietnam when Cheney was getting serial deferments -- because, in his own words, he had "other priorities."

It is hard to imagine a record as profoundly impressive as that of the Bush-Cheney administration, back when everyone knew that [Cheney] was really in charge of everything important—especially the war on terrorism, the war in Iraq and the war in Afghanistan.


Of course, occasionally Cheney got some things wrong:

True, Cheney’s intelligence apparatus failed to capture or kill Osama bin Laden after 9/11—indeed, failed to prevent the 9/11 attacks, despite ample warnings that began with Bill Clinton’s farewell message in January 2001 and culminated in a blaring President’s Daily Brief from the CIA in August 2001. True, Cheney’s defense command allowed bin Laden and Mullah Omar to escape following the invasion of Afghanistan, while American and NATO troops slogged through that deadly conflict without a plausible goal or even an exit strategy. And true, the national security cabinet run by Cheney misled the nation into war against Iraq, on false premises, without adequate preparation or clear objectives, at a cost of many thousands of lives and trillions of dollars. And true, too, the ultimate result was to embarrass the United States repeatedly while increasing the regional power of the mullahs in Iran.


Cheney, of course, does not admit mistakes. And that is -- and was -- the problem.  Which begs the question, "Why is anyone still listening to him?"

Cheney should be in prison. At the very least he should be off of the damned television shows.

Whether it's their big banks, thwap, or Mr. Cheney on
television, failure seems to generate rewards.

Mr Obama seems rather fond of the old guy, actually. Kept all his policies in place and seems to love the Cuban prison to death. Absolutely to death.

One of Obama's biggest disappointments is his refusal -- or inability -- to close Guantanamo, Dana.

It does not reflect well on a Nobel Prize winner.

Doesn't reflect all that well on the Nobel panel either, Owen.

Did I ever tell you Owen is my middle name? S'truth.

Another Owen, Dana. When I was a kid, the only other Owen I knew was my father.

But my wife's uncle was named Owen. And, these days, I keep running into Owens.

Ditto on the Owen as father's name too. Also grandfather. It's a grand name.