The Perils Of Prediction 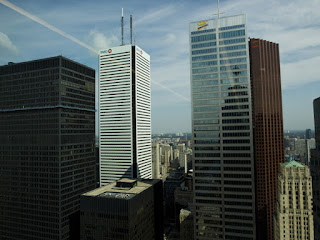 The National Post reports that, in a new book, John Ibbitson and Darrell Bricker predict that Stephen Harper's Conservative Party will be "perpetually dominant" in the 21st century:

“Politics in Canada is dividing along ideological lines, and those divisions will only grow sharper over time.”

“We believe that the Conservative party will be to the 21st century what the Liberal party was to the 20th: the perpetually dominant party, the natural governing party.”

The book, The Big Shift, is the development of an argument which Ibbitson has been pitching these days -- that the old "Laurentian consensus" -- the political triangle represented by Toronto, Montreal and Ottawa has been shattered.  Power, he maintains has moved westward:

“Harper and his closest advisers were the first to anticipate the tremendous political potential of the Big Shift,” the book says.

“He recognized that the West was transforming from a region of protest to an emerging centre of power.


But just as Harper has ignored the lessons of history regarding the perils of relying on commodities to build a nation -- whether they were fur, wheat, oil or the infrastructure to move them -- Ibbitson and Bricker ignore the fact that  Montreal and Toronto invested in those western commodities. The financial hub of Canada is still firmly ensconced in the East. Energy companies -- like Shell -- may have moved their head offices to Calgary. But the banks aren't going to move.

They have always been a thumb in the eye to Albertans -- and they still are. But they will remain in the East. And, when the bitumen bubble bursts in Alberta, money will once again flow to the centre. The Laurentian Consensus hasn't died. It's alive and well.

Email ThisBlogThis!Share to TwitterShare to FacebookShare to Pinterest
Labels: Ibbitson and Bricker On Conservative Dominance

Just as good actors know not to appear with children or animals, a good political analyst should know to avoid predictions, at least positive predictions. If one is going to go out on a limb like that, one would be better off predicting what won't happen than what will.

This is Ibbitson's wish, not his prediction. It also shows how blinded he is by his own ideology. Real evidence shows that Canada is getting more liberal, not more conservative, and that the Conservative Party is in power as a result of an historical quirk rather than their popularity. Furthermore, for the first time in a very long time people in the mainstream are talking about things like income inequality, the limits of capitalism, and the need for political reform. While Harper is the least popular PM overall in living memory. This evidence suggest that far from "ruling for a century" the CONs will soon go down to rather ignominious defeat, and will remain a spent force for the foreseeable future. Meanwhile they continue to hold fast to an ideology and economic approach the is cutting the very foundation from under them. I don't know what will take their place (I won't make this positive a prediction), but I know that their time is growing nigh.

You're right, Kirby. Ibbitson would do well to consider what has happened to Karl Rove, who predicted a permanent Republican majority.

On election night, he simply denied reality. I suspect that Ibbitson is doing the same.

Holding true to the right-wing propensity for saying things enough times until it is accepted as a general truth, Ibbitson and his ilk of Harper cheerleaders continue to champion the neo-liberal agenda as the one true religion. I used to read the Globe and Mail comment boards after an Ibbitson column, Owen, and it is clear that there is a wide segment of the Canadian population that sees the writer for what he really is, a propagandist disguised as a journalist.

I read Ibbitson's book, The Promised Land, Lorne. Although he was a supporter of The Common Sense Revolution, his analysis had some balance.

Unfortunately, he has lost his sense of perspective and is now, as you say, merely a cheerleader.

I never thought Ibbitson had a sense of more than a small segment of Canada. That's probably all he's ever been much interested in and it prevents him from seeing the rest. Surveys throughout the Harper years have consistently shown Canadians have not been pried from core liberalism. We're progressives.

While a sufficient minority has given Harper a majority that was achieved in the absence of any viable Liberal contender.

Remember this (because Ibbitson can't) - Harper has yet to win an election on policy. He doesn't present vision. His former BFF Flanagan says Harper has no capacity for vision. Harper defeated Dion by smearing Dion. He defeated Ignatieff by, essentially, smearing Iggy (albeit Iggy did nothing to help himself or his party).

If Harper continues to prevail it will only be because the Liberals can't emerge from their sabbatical. It's quite conceivable they will continue to allow him to win by default yet that's not the premise Ibbit relies upon.

Ibbit cannot foresee the looming impacts of climate change and social upheaval that are spreading throughout the world and are already being felt in Canada. What Harper does, as related again by Flanagan, is to create the appearance of acting while actually doing nothing.

Harper is a high-carbon fossil fueler in an age that is bypassing carbon assets because there simply is no other option. Sideshow Steve has positioned Canada squarely within the already dangerous Carbon Bubble. He's setting Canada up for a major economic pummeling when that bubble bursts and first up will be the high-carbon fossil fuels Canada produces.

No, Ibbitson's theory works only because it is stripped of facts and reality. If I omit sufficient facts I can plausibly argue that the moon is indeed made of cheese.

Harper is a dictator and dictators are noted for not giving up power easily. The most remarkable thing about Hitler was that he only lasted twelve years. Mostly, despots are dictators for life.

Harper probably stole the last election. But Elections Canada and the judicial system are doing nothing. Even simple investigation is not happening. Naturally it will happen again - why not, when it is so easy?

The average Canadian is passive and wilfully ignorant. The concept of organising is alien to them, except in Quebec where it is natural. Canadians are enabling this dictatorship. You can blame Harper but every population has a few Harpers. A healthy body politic limits the power such people get.

I agree, Mound. Ibbitson confuses what is, in reality, a regional party with a national one.

When the bitumen bubble bursts -- and it will -- the Harper Party will once again be confined to its regional base.

The Canadian body politic is not healthy these days, Fighting. Parasites thrive on disease.

Unless -- and until -- Canadians choose health over illness, they will enable Mr. Harper.

Harper's success, then, has more to do with us than it does with him.

"Harper's success, then, has more to do with us than it does with him."

Bingo! Give the man a teddy bear.

We get the government we deserve, Dana.

Such long term predictions is dangerous. There are too many unforeseen items in the future. Until the Conservative actually reflect Canadian values they are vulnerable. They may think they are developing a new Canadian ethos but the fact that they continually lose on challenges to the Supreme Court indicates they are lagging the Canadian center. The best defender of Canadian values is the Court and the Charter of Rights and Freedoms.

Precisely, Philip. The Charter is the bane of the Harper Conservatives.

I suspect that's why they did not celebrate its thirtieth anniversary.

perhaps we could call it the Big Shit. I certainly don't expect harper to be there for the 21st century or his clan of slimers. People elected the conservatives but they didn't expect them to try to bring back the choice debate, try to listen in on everything we said, treat our war vets like yesterdays garbage, try to destroy our enviornment, cut back on citizens' pensions while continuing to party on themselves, destroy our democracy as we know it.

as stevie slime continues to implement his agenda, more people are being effected and more people will start looking for alternatives, however much they may not like those alternatives.

Mr. Harper and Co. operate on the principle that Canadians are apathetic, e.a.f.

As the anger of those who are suspected of defrauding E.I. builds, the Harperites sit smugly in their offices.

The storm will break and wash Harper and Co. away.