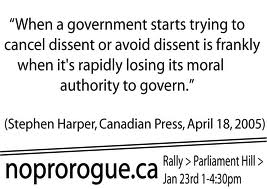 Paranoia drives the Harper government. If you don't believe that, consider what is happening at the Department of Fisheries and Oceans. Michael Harris writes:

Fisheries and Oceans Canada, where a reign of terror aimed at choking off internal leaks has been in full swing since the disastrous decision to close the Experimental Lakes Area (ELA), has issued a new policy on the publication of scientific papers.

Previous policies applied only to those papers prepared by DFO scientists. If government scientists teamed up with non-DFO scientists on a paper, it was merely “recommended” that DFO scientists adhere to the departmental publication policy. The new policy applies to all submissions and DFO approval is required. Just to make sure scientists get the message, that part of the revised guidelines is printed in bold italics. Making things worse, the new policy does not lay out the criteria for giving thumbs-down to a publication.

The Harperites are deeply afraid that evidence based information will de-rail their agenda. And, of course, they're right. All the evidence these days -- economic, social, political -- is running against them. Take, for instance, their prime directive -- that austerity is the way to a brighter future. Europe has proved for the last two years that austerity won't generate growth. And, after two omnibus budget bills, that reality has descended on Canada:

“We saw the other shoe drop for the Canadian economy,” on Friday, said Douglas Porter, chief economist at BMO Capital Markets. “And there feels like there was a bit of comeuppance.”

Data showed employment fell back in January — the first time that has happened in six months — with many people simply giving up looking for work.

As well, the number of new residential buildings under construction tumbled during the same month, with weaker activity in both single and multiple-unit homes, particularly in Ontario.


When the news is not good, the government desperately tries to muzzle the messengers. Because, when you begin to look at the data, you discover that the folks who sell themselves as competent managers are frauds. Harris writes:

And where else on the planet would a government close down a unique and celebrated facility like the ELA to save $2 million a year, while blowing $25 million trying to breathe relevance into a 200 year-old war?

If the truth ever gets out, this government will be consigned to the dustbin of history. No wonder they're scared as hell.

We've known for years that harper and Flaherty are economic incompetents. It's been a concerted campaign of deception (and the self-delusion of harpercon die-hards) to obscure that fact.

On the economy the mantra is always it is slow because we American economy has not strengthened enough or the European economy is in a mess.
The government does not mention that our economy is slumping because of its own policies of austerity. They have been laying off people and shutting down programs ( which employ people) Not long ago they made it harder to buy a house (cool off the housing market). Should we be surprised the construction employment figures are down? It seem they government is creating a crisis which eventually will require a stimulus program. I expect they will blame this on the state of the American and European economies. We need a stimulus program now before it becomes a crisis. We certainly need money spent of infrastructure. They could start on high speed trains on the same scale of building the Trans Canada Highway.

And it's amazing how far these guys have gone, thwap. In another profession -- say, selling used cars -- they'd be failures.

These folks make a habit of taking credit for someone else's good policies -- like the previous government's banking policies -- and side stepping the blame for their own disasters.

Most Dictators throughout history and to-day, are all paranoid. Controlling the media, is number one on a Dictators list. Then they grab control of everything they get their hands on.

Is Harper a Conservative? He was Policy Chief of his, Northern Foundation Party of 1989.

Harper also gave a speech in New York, at The Council of Foreign Relations. This was Sept 25/2007.

Harper also gave a speech on, Global Governance for Canada. He said. A New World Order has been worked on, since 1945.

Now, Harper seems to be giving Canada's resources and resource jobs to China. What China isn't taking. The U.S. is.

Mr. Harper works very hard to silence dissenting voices, Anon. It would be helpful if those in his own party would have the courage to dissent.

I believe it is a rather delicious irony that it is precisely their ideological obsession with creating the illusion of crisis (which of course doesn't exist really because there is more wealth than ever) and their only possible response (which is to take more money from the working-class), is the very thing that will destroy them. They have painted themselves into a capitalist corner. They HAVE to pursue this agenda but it will inevitably lead to greater poverty for the majority which will lead to electoral failure. You have to love it.

The narrative is as old as Greek tragedy, Kirby. Their overbearing hubris will be the cause of their flame out.

I'll believe they're scared when polls show them significantly and consistently below 30%.

Until then I'll continue to believe the Canadian voter is either apathetic or dumb as a post.

And, if they continue to succeed in suppressing the truth, Dana, they'll probably convince Canadian voters that they're doing a good job.