They Know They Can Get Away With Them 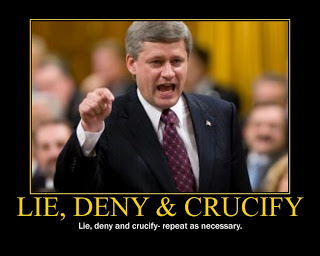 For the Harperites, denial is Standard Operating Procedure -- until they're caught in a lie. Then they back off their denial. But they do it without blushing. Take the case of Pamela Wallin's senate expenses. Lawrence Martin writes that, even though Wallin was on a list of audited senators,

Senator David Tkachuk, chair of the Senate committee that reviews senator expenses, told The Globe and Mail that no, she was not on the list. But then, just a few minutes later came a CTV report in which Ms. Wallin herself confirmed she was being audited.

Why would Tkachuk, certainly in position to know, have denied it? Was he under orders from the Prime Minister’s Office to keep it under the wraps? Or was it just an interestingly timed brain malfunction?

The Senate-referral denial followed a denial by the Conservatives last week that they were behind a robocalls scheme on electoral boundary changes in Saskatchewan. That denial didn’t hold up either. When confronted by reporters with evidence, the Conservatives U-turned, confirming they were behind the calls. At the same time Minister Keith Ashfield was denying that the government had changed the rules for publishing documents from the Department of Fisheries and Oceans:

Columnist Michael Harris had detailed the changes on publications policy in a column in iPolitics. He had interviewed several scientists. After the Ashfield denial, they confirmed their initial statements to Harris on the policy changes. As well, Harris had more evidence — an email from inside DFO referencing “new publication review committee procedures.”


Add the denials to a long list of government attempts to conceal information:

The institution of an unprecedented vetting system wherein all messaging has to pass through central command. The hoarding of information on program costing to the point where Stephen Harper became the first prime minister in history to be found in contempt of Parliament. The near-record use of time allocation, closure and other measures to limit Parliamentary debate. The muzzling of the science community. Mr. Harper becoming the first prime minister in memory not to hold open-ended press conferences. The shutting down of Parliament twice for blatantly political ends.

A few other examples: The surreptitious in-and-out affair. Allegations that robocalls were used to send Canadians to the wrong polling stations. The use of debate-limiting omnibus bills. The closing down of the long-form census and other databanks and websites. An edict exempting cabinet staffers from having to testify at parliamentary committees. Several instances of document tampering. The accountability-defying practice of having ministers under the gun not stand in the Commons and answer questions. Measures making it harder to use the Access to Information system. Appointing lapdogs as watchdogs, the prime example being the Integrity Commissioner.


It's clear that, when the Harperites can't hide information, they lie. And they do all these things because they know they can get away with them.