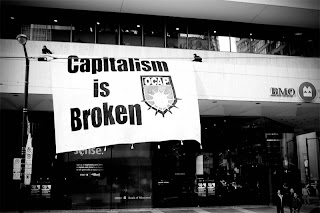 As a response to the Great Depression, western governments put in place several "economic shock absorbers" -- unemployment insurance, welfare and baby bonus cheques -- to cushion the negative effects of an economic downturn. But neo-conservatives, convinced that they encouraged people to become fat and lazy, systematically destroyed those shock absorbers. Under the banner, "Makers Not Takers," people like Paul Martin and Stephen Harper cut back on government assistance to Canadians. Carol Goar writes, in The Toronto Star, that the war on the poor continues:

[Jim] Flaherty has ruled out “risky new spending schemes” — by which he means improved social programs. His March budget might include a couple of targeted poverty-alleviation measures for aboriginal Canadians, but nothing broadly based. On the tax side, he aims to reduce the number of brackets, making it less progressive and allowing high-income earners to keep more of their money. (Canada and the U.S. are going in opposite directions on this issue. Washington’s top personal tax rate is 35 per cent. It is slated to rise to 39.6 per cent next year. Ottawa’s top rate is 29 per cent. It is expected to remain stable or go down.)


And while Flaherty makes the rich richer:


The stabilizers were an attempt to increase demand when economies -- and people -- were struggling. They were not just a compassionate response to people who found themselves between a rock and a hard place -- they made good economic sense.

But Mr. Harper and Co. believe compassion is a character flaw. And -- their own propaganda aside -- it's painfully obvious that they're lousy economists.

You would think these neocons look upon the Victorian Era as the pinnacle of economic security and progress. All is well until the Spanish Flu or some other calamity hits the streets, killing rich and poor alike.

Charles Dickens would recognize our society, Bejiing. He would conclude that Scrooge had not undergone a conversion.

And, when he got wind of Harper's crime agenda, he would conclude that the prisons and the workhouses were still full.

“The world seemed incomprehensible and crazy, but then I realized opulent sociopaths were running it; now everything makes perfect sense.”

In those eureka moments, Anon, truth arrives like a bolt of lightning.