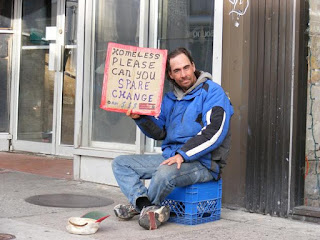 The Conference Board keeps churning out reports which should embarrass the Harper government. The Board's latest report ranks Canada 7th out of 17 developed countries in terms of quality of life. It's interesting that, in terms of falling crime rates, we are doing very well -- although, if you believe what the government tells us, it's not well enough.

But what is truly disturbing is the growing rate of income inequality:

In Canada, the gap between rich and poor has widened over the past 15 years, and the board says all age groups have felt the change -- with both child and elderly poverty on the rise.

Perhaps, most notably, the country at the bottom on all measures was the United States, which the Harper government has taken as its model.

We are racing to get to the bottom as fast as we can.

Amidst this gloomy picture, Owen, is a small ray of hope in Ontario as The Star reports there is a chance of a modest reform that will allow people receiving Ontario Works to keep a little more of the money they may earn at jobs before having it clawed back. I suspect such a change, although small, could have a significant impact on the lives of the poor. Whether such a reform is enacted depends upon the ability of Andrea Horwath and Kathleen Wynne to play nicely together.

As you suggested yesterday on your blog, Lorne, Ontario truly needs leaders who can work with each other.

We can only hope that the ladies will show us how it's done.

All of these discouraging results logically come from policies that are based on the ideology that "market forces" will regulate to economy and society best. The Harper conservative government has this as a guiding principle. It of course does not work for the betterment of society. When greed and self interest are allowed without adequate regulation it is to the detriment of society in many ways.5519 onducel

Markets have their uses, Philip. They can distribute wealth. But there is no guarantee they will do it justly.

The Harper government is committed to punishment. But it makes no commitment to fundamental justice.

Another blogger I like, Sol Chrom, said in his blog a few weeks ago, "the public good is not the same as the bottom line."

And I don't know if you read Ian Welsh http://www.ianwelsh.net/ , but he has a thoughtful post in this vein today, with some equally thoughtful comments.

Thanks for the link, Karen. Unfortunately, if readers click on it, they'll double back to Northern Reflections.

But if they Google Ian Welsh, they'll come upon this passage:

"This is why we can only have change after catastrophe: after war and famine and revolution, because only in extremis, only when, as in WWII, people realize that everyone is in it together, will they be willing to take care of each other."

I can't help but think we're headed for catastrophe. The questions are: Must we go there? And, if we do, will we be smart enough to realize that we're all in this together?