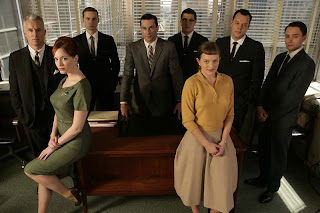 Frances Russell writes that the Mad Men who currently reside in Ottawa's executive suites are destroying the Canada that their wiser forebears built after World War II:

In keeping with the world-wide market mania of the last two decades, Canada’s dominant political and economic ideology demonizes government and the state except as a tool of social control, defence and war.

Driven by the bully pulpit of corporate think tanks and right-wing politicians, the push is on to shrivel, if not dismantle, all the achievements of Canada’s last half-century and more of nation-building.


They seek to transform the nation, convinced that Canadians have become fat and lazy:

From equalization to medicare, from unemployment insurance to collective bargaining, from affordable housing to pensions and from social programs to quality affordable education, all are supposedly crippling distortions of that pinnacle of human intellect and success — the untrammelled free market. And so all must be downsized or abolished.


She then goes on to quote choice passages from several think tanks, which claim to be fonts of wisdom. Consider this pearl from Brian Lee Crowley, president of the Macdoanld-Lauier Institute:

“Subsidizing poorly-performing parts of Canada is in truth a policy of refusing to make people face the consequences of the poor policy choices they have made over the years,”


Russell then juxtaposes Crowley's nostrum to this passage from the  Rowell-Sirois Report, which was commissioned to examine the causes of and remedies to The Great Depression:

“The most economically distressed areas are the ones least capable of supporting those services and yet are also the ones in which the needs are likely to be the greatest. Not only national duty and decency, if Canada is to be a nation at all, but equity and national self-interest demand that the residents of these areas be given average services and equal opportunities …


History shines a harsh light our present day "best and brightest." They are truly Mad Men.

Well said, Owen. The sooner Canadians open their eyes to the ongoing dismantling of this country's underpinnings and traditions, the better off we will all be, the 'wisdom' of right-wing 'think'-tanks notwithstanding.

I am confounded by the so called "wisdom" of organizations like the Fraser Institute, Lorne, which -- when you examine the list of funders -- clearly carries no brief for what Leona Helmsley called "little people."

The signs are everywhere and indisputable. The stagnation of incomes and the rise of inequality of income, wealth and opportunity. The decline in our health and educational institutions. The death of our free press, watchdog of government, usurped by a corporate media cartel, lapdog to a collaborative government. The relentless assault on organized labour and collective bargaining by this government. The defunding of government accompanied by cuts to corporate taxes and federal deficits. The decay of infrastructure across Canada from sea to sea. The loss of manufacturing and the shift to resource exports, particularly fossil fuels - indeed the worst high-carbon fossil fuels on the planet - bitumen and coal. The suppression of science and knowledge through such things as the castration of the census. The wanton embrace of environmental calamity such as Northern Gateway. The ascendancy of globalization and the decline of our once robust middle class. A country now harnessed into service of its commercial sector, the former stable relationship sharply reversed. An opposition almost as supportive of these things as the government. A government that rules by secrecy, deception and manipulation in service not to the nation and our people but to the Masters of Commerce.

Christ, Owen, it's all there. It's inescapable, indisputable. We should be hearing Liberals and New Democrats alike screaming this out at the top of their lungs on the floor of the House of Commons and in town halls across the country, inspiring ordinary Canadians to stand up and throw this awful mess over.

This globalization/free trade nightmare unleashed out of the sophomoric ideology of Reagan, Thatcher and Mulroney and spread around the world on corporatist wings has laid us all low and raced ahead even of our world, our sole biosphere's ability to provide the resources it consumes.

These are mad men, genuine lunatics.

And they speak in the flat, soulless language of the technocrat, Mound.

Harper was Policy Chief for his, Northern Foundation Party of 1989. That is likely where his, abusive dictatorship stems from.

Harper gave a speech on, Global Government for Canada. Harper said. Global Governance has been worked on since, 1945. Right after Hitlers, Third Reich. Is Canada Harper's Fourth Reich?

We have heard of this for years. However, Canadians are especially known for, sleeping through absolutely everything. Harper knows that, and counts on it. Just try and wake Canadians up? It's an exercise in futility.

Canadians are patient, Anon. But there comes a time when they tell their leaders to get off the bus.

I continue to hope that, in Mr. Harper's case, they're ready to open the door and throw him out.