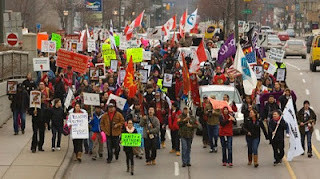 When Preston Manning's  neo-conservatives rode into Ottawa twenty years ago, their rallying cry was, "The West Wants In." They claimed that they had been outsiders for too long. And, with the hypocrisy which has characterized them since their arrival, they then proclaimed that there should be "No More Prime Ministers From Quebec."

They succeeded, not by filling a big tent, but by carefully targeting voters and excluding -- by robocalls and other dubious techniques -- the majority of Canadian voters. It is curious then, Rick Salutin writes, that their exclusive politics has empowered those who are considered outsiders. We saw that phenomenon with the election of Barack Obama, with the election last week of Kathleen Wynne as leader of the Liberal Party of Ontario and -- I would suggest -- with the Idle No More movement. Salutin writes:

This isn’t the politics of ideas and issues anymore, though it has those. It’s the politics of inclusion. In the old days, the guys at the core articulated a vision and gathered “outsiders” — youth, women, ethnics — around it. But they stayed in effective control. Here the outsiders form a majority — it’s the point — and issues follow. Obama’s win in the U.S. is the prototype, but only in his second election.


The Republicans are beginning to catch on. They are suddenly in favour of immigration reform, although I suspect they still haven't figured out what is really going on. Salutin is ahead of them:

It seems to me this has to do with globalization, but not the economic kind that leaders like Brian Mulroney and Ronald Reagan preached in the 1980s. This is globalized contact in myriad forms, including online games, person-to-person, unmediated by authorities and news anchors. Guess what they find: outsiders are the global majority — by miles. Authoritative males are few — and you don’t need them to learn what’s going on, or their blessing to act. There’s also a mingling effect due to vast migrations, based on economic needs and dislocations. This all runs counter to the explicit agenda of economic globalization, which plays people off against each other, isolates them and forces them to compete.


If Salutin is right, Stephen Harper's agenda is doomed. But, like his Republican cousins, he soldiers on -- convinced that the wealthy create jobs and, therefore, they need to be handled with kid gloves. It is truly unfortunate that those who presently rule the roost do not understand what they have wrought.

When the new outsiders force their way in, the old outsiders will be back where they started.

Harper only wants the, very wealthy and the very poor. He knows damned well the wealthy don't produce jobs. Big business is forever at the trough, squealing for more money. Harper usually gives them another tax reduction. That shuts them up, for a few minutes anyway. Giant corporation don't have their accounts in Canada. They prefer off shore tax free accounts.

Billions of revenue is lost by, Canadians shopping in the U.S. Canada has the highest cost of living in all of the Americas. Harper just made it easier for, Canadians to bring back much more from the U.S.

Quite some time back I read: Harper makes a speech in New York, at the Council of Foreign Relations. This was Sept 25/2007.

I also read: Harper's speech of, Global Governance for Canada.

Harper has permitted China to set up shop at the tar sands. China owns the resources and, the resource jobs. China is permitted China to bring, their own cheap labor. That cheap labor, sends their money home to China. China's minimum wage is, $236 per month. All company's have Harper's permission, to hire that cheap labor. Harper's Omnibull-s-bill, permits China to sue, any Canadians getting in China's way. China sued in BC, to take the mining jobs. That money too, gets sent home to China.

How ever can anyone think, what Harper is doing isn't deliberate?

I am saying. Any province that wants to survive Harper's strangle hold? Has better get the hell out, of Harper's Canada. However, no-one will see that either.

Harper's clientele is narrow, Anon, and his support is not very deep.

He has managed to go along way without a majority of the votes.