The Women Have Arrived 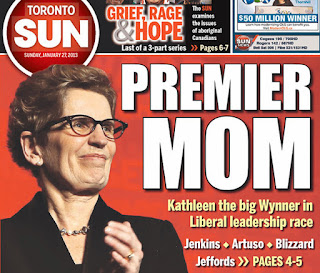 When Kathleen Wynne introduced her cabinet yesterday, she became the fifth woman premier in the federation. Lawrence Martin writes:

Now, women run much of the federation. They are at the controls in five provinces – including every big one in the country – and one territory. There’s Kathleen Wynne, who was sworn in as the Premier of Ontario on Monday. There’s Alison Redford in Alberta, Christy Clark in British Columbia and Pauline Marois in Quebec. Add to them Kathy Dunderdale in Newfoundland and Labrador. And don’t forget Eva Aariak in Nunavut.


Which leads to the question, will the tone of Canadian politics change? Martin writes:

It’s a good bet they’ll bring a greater degree of integrity and morality to politics. Not that they’ll be squeaky clean. Some of the aforementioned face questions of ethical breaches. But given the male precedent, the task of forging a higher degree of public respect for the system should be achievable.


The problem, of course, is that the prime minister is a good old boy. Ever since his quarrel with Belinda Stronach, he has left the impression that he has a hard time dealing with strong women.  Add to that the fact that Harper refuses to meet the premiers -- male or female -- as a group, and you have a divided nation. And that's just how Stephen Harper likes it. Like a medieval lord, he treats the premiers as vassals, playing them off one against the other. So don't expect to see the ladies gathered around a conference table with the prime minister.

And, given the problems Canada faces -- on the economy, climate change and healthcare -- that is tragic. Martin writes that conferences between the prime minister and the premiers

are a nation-building challenge to be faced, not dodged. It is normal practice for leaders of major organizations to meet with their big constituent parts to thrash out problems and priorities. Mr. Harper shows skill and moxie at international forums and would be capable of the same here. He excuses himself by saying he meets often with the premiers separately. That’s true. But other prime ministers did that as well as bring all the premiers together.


One wonders if Harper is afraid that the ladies would underscore his fundamental flaws. Women have a talent for doing that sort of thing.

Email ThisBlogThis!Share to TwitterShare to FacebookShare to Pinterest
Labels: Harper And Women Premiers

Your post shows how far we have to go to achieve any semblance of democracy after its decimation at the hands of Harper, Owen. Let's hope that the ladies can reawaken some faith in our institutions, which can only work to our ultimate good as a society.

Certainly, the players around the provincial table have changed, Lorne.

The problem is that Mr. Harper does not feel constrained by anyone -- federally or provincially.

The only weapon the other sides have is a united front -- federally and provincially.

Don't expect much from Christie Clark. She's gone just as soon as we have an election.

Under her watch children continue to starve at an alarming rate, Banks pay no taxes, and jobs continue to disappear.

Meanwhile, she has broken records for partisan advertising on the taxpayer dime and our debt is higher than ever.

The comments I get from the West Coast, Kim, don't praise Ms. Clark. I get the impression she doesn't have a long term future -- at least as premier.

And, besides, Harper is playing Clark and Redford off against each other. Perhaps the other ladies will be smart enough to avoid that fate.

Clark isn't Premier because she led her party during a campaign. Nor is Redford, nor is Wynne, nor is Dunderdale. Doesn't make them illegitimate Premiers but it does mean they carry an asterisk. Salt required, Lawrence.

It will be interesting to see if the ladies change the way things are done.