The Epitome of Folly 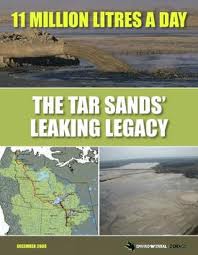 The Edmonton Journal reports that Natural Resources Minister Joe Oliver knows about the damage being done by mining the tar sands:

The memo, released through access to information legislation, said that federal government scientists, including Quebec City-based research geoscientist Martine Savard, had discovered evidence of the contamination in new research that rejected longstanding claims that toxins in the region of the Athabasca River were coming from natural sources.

“The studies have, for the first time, detected potentially harmful, mining-related organic acid contaminants in the groundwater outside a long-established out-of-pit tailings pond,” said the memo from deputy minister Serge Dupont, dated June 19, 2012.


Oliver, of course, would not make that information public. It undercuts his whole argument that Canada's future is all about being an energy superpower. But the scientists at Environment Canada keep telling him and the other Harperites what they don't want to hear:

Other peer-reviewed research, published last fall, has also found evidence that contaminants from oilsands air pollution are collecting on the bottom of lakes that are up to 100 kilometres away, raising concerns about anticipated expansion over the next decade.


The Harperites believe that, if they ignore the evidence, it will go away. That belief, of course, is the epitome of folly.

This entry is cross posted at Eradicating Ecocide.

Albertans don't care if they sicken and die and as long as they're rich.

There's always a price for being rich, Dana. And often the price is too high.