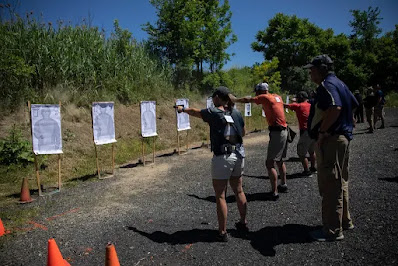 If you want to understand how insane things have become in the United States, consider this report from this morning's New York Times:

RITTMAN, Ohio — Mandi, a kindergarten teacher in Ohio, had already done what she could to secure her classroom against a gunman.

She positioned a bookcase by the doorway, in case she needed a barricade. In an orange bucket, she kept district-issued emergency supplies: wasp spray, to aim at an attacker, and a tube sock, to hold a heavy object and hurl at an assailant.

But after 19 children and two teachers were killed in Uvalde, Texas, she felt a growing desperation. Her school is in an older building, with no automatic locks on classroom doors and no police officer on campus.

She decided she needed something far more powerful: a 9 millimeter pistol.

So she signed up for training that would allow her to carry a gun in school. Like others in this article, she asked to be identified by her first name, because of school district rules that restrict information about employees carrying firearms.

A decade ago, it was extremely rare for everyday school employees to carry guns. Today, after a seemingly endless series of mass shootings, the strategy has become a leading solution promoted by Republicans and gun rights advocates, who say that allowing teachers, principals and superintendents to be armed gives schools a fighting chance in case of attack.

At least 29 states allow individuals other than police or security officials to carry guns on school grounds, according to the National Conference of State Legislatures. As of 2018, the last year for which statistics were available, federal survey data estimated that 2.6 percent of public schools had armed faculty

The count has likely grown.

As a retired teacher, I am both horrified and appalled. The country is on the verge of anarchy. And, if anarchy results from this national insanity, there will be a national bloodbath.

Email ThisBlogThis!Share to TwitterShare to FacebookShare to Pinterest
Labels: Guns In The United States

How convenient that the NYT can't report the Glock-toting teacher's last name. That way we'll never find out if she's a long-time NRA member and the spouse of a Republican politician. Those are the kinds of details that tend to leak out after other NYT reports on controversial issues.

Regardless, Cap. It's crazy.

So, tell me about how all those guys with guns standing out in the hallway helped the situation and gave support to the teacher and children on the other side of a door that the gun holders did not venture through to try and save them.....

There are obviously much bigger problems south of our border that no one seems to be able to sort out.

I also have been a teacher - for 29 Years - and considering how police stood by for over an hour while a gunman shot and killed students and faculty in a small Texas school, I understand why a teacher(perhaps many teachers) would feel the need to arm themselves. It's tragic that a teacher should feel the need to do that: gun-carrying teachers could cause more deaths than they prevent, and might serve by their example to encourage even more people, including students, to arm themselves out of a belief that the world in general is a threatening and murderous place - hardly a healthy attitude for young and impressionable people to learn in school. Politics aside, this knee-jerk reaction to the students murders is "not helpful".

A few weeks ago, just after Shinzo Abe was killed by a gunman in Japan, I heard on the news that Japan has very strict gun laws and gun murders are extremely rare in Japan...something like one per year. The conclusion seems obvious.

Her sense of desperation is real and I am sure she is not the only one realizing that solutions are not coming from institutions or elected officials. I wouldn't be so quick to suggest that the teacher is a Republican. See "They’re Afraid. They’re Buying Guns. But They’re Not Voting for Trump." https://www.politico.com/news/magazine/2020/10/25/first-time-gun-sales-not-voting-for-trump-430310

It is a dangerous idea of course. Accidental gun deaths only occur when there is a gun.
SM

Even more than insanity, Lulymay, there seems to be a national crisis of cowardice.

It's not helpful and not practical, CD. What chance does a teacher with a nine-milometre pistol stand against a shooter with an AR 15?

As obvious as the noses on our faces, Gordie.

With all of those guns, there are bound to be mistakes made, SM -- and those mistakes compound the problem.