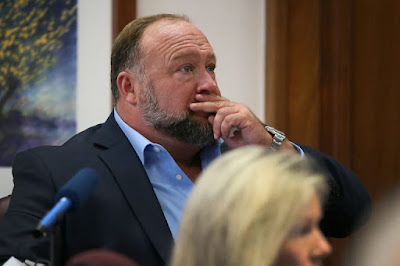 Alex Jones has built a career on lying. This week, in a courtroom in Texas, he has met with a reckoning. Eugene Robinson writes:

The far-right radio host’s trial in an Austin courtroom has been almost enough to restore my faith in truth, justice and the American way. Jurors have been determining how much of his likely nine-figure fortune he must pay to the parents of a victim of the Sandy Hook school massacre for defaming them and their late son. Jones’s wildly successful business model has been based on concocting outrageous lies and shouting them at the top of his lungs to millions of listeners. But that does not work so well, it turns out, in a court of law.

“You are already under oath to tell the truth,” Judge Maya Guerra Gamble admonished him. “You’ve already violated that oath twice today. ... Just because you claim to think something is true does not make it true. It does not protect you. It is not allowed. You’re under oath. That means things must actually be true when you say them.”

Like Donald Trump, Jones has made a fortune from a Big Lie:

What Jones did was unspeakably vile: He claimed repeatedly — and falsely, with absolutely no factual basis, since none exists — that the 2012 Sandy Hook killings never happened at all, that they were some kind of “false flag” operation that was “a giant hoax,” and that the 20 dead children ripped to pieces by rounds from an assault rifle were nothing but “crisis actors.”

Yesterday, the jury fined Jones $4.1 million. But that's just the beginning. They will now determine how much Jones owes in punitive damages.

The way to shut up people like Jones is to make lying very expensive. By the time the legal system is finished with him, Jones literally won't have a pot to piss in.

The CBC reports that Jones' company earned $800,000 US gross in a single day, which would amount to nearly $300 million US per year. $4.1 million amounts to 5 days take. Unless the jury comes back with a massive punitive damages award, Jones will write this off as a cost of business.

There needs to be a provision in our own Charter of Rights and Freedoms against “lying”. Lying is one of the most destructive ways in which a person who is grossly lied about can lose everything. Anyong

Just a thought: I have an intense dislike of Alex Jones' outlook and process.
He is the sacrificial lamb on the altar of impaired truth, chosen as an easy and cheap mark for burnt offering by a whole class of people in politics, business and social affairs who regularly make a habit of distorting the truth through sins of both omission and commission.

I can only imagine the maneuvering that is going on behind the scenes, Owen, in Jones' preparations to cry 'poverty' and declare bankruptcy. He is a weasel, through and through.

I suspect that punitive damages will be pretty steep, Cap. And there are more lawsuits to come.

Perjury is the foundation of our legal system, Anyong. Lies simply undermine justice.

He's an easy target, Danneau. But there are also all kinds of other people who are easy targets.

I suspect the real story of the Alex Jones trial will be his phone, his text messages, delivered by his defence counsel to the plaintiff's counsel, apparently by mistake. There is something in the order of 300 gb of messages, phone and other records and the Jan 6 panel wants them badly. It's said they connect Jones with the White House and Roger Stone.

Jones is only beginning to feel the hurt, Mound.

Well, the jury's awarded $45.2 million US in punies. I believe Texas caps them at $50 million, so they've pretty much gone to the max. It's a good start.

And Jones just picked up another $45 million in punitives. His lawyer looked queasy.

It's a good start, Cap. There's more to come.

Any lawyer should feel that way when he has to defend the indefensible, Mound.