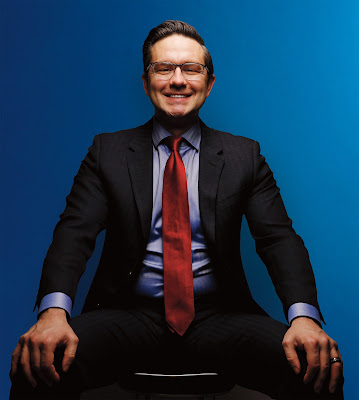 Pierre Poilievre has taken over the Conservative Party and Michael Harris is not impressed:

It has been a rocky debut. It seems the boys over at headquarters stuck their hand in the blender when they sent a text message to party members in the Quebec riding of Richmond-Arthabaska. They advised members to demand that former Conservative MP Alain Rayes resign his seat. Rayes couldn’t stomach the prospect of Poilievre’s leadership and became an Independent. That triggered the attack of the cyber goons.

The party quickly apologized for its overreach. Their ludicrous explanation for this obvious exercise in punitive politics was that the message was “automated.”

Even automated messages don’t send themselves. It wasn’t sent in error. The only error was underestimating the blowback surrounding this act of petulant payback. They seem to have forgotten something pretty basic. Rayes’ political future is between the MP and the constituents who elected him, not Poilievre’s minions in head office.

What did Poilievre do? He got even:

Poilievre himself did what a lot of autocratic personalities do when put in an embarrassing situation: he made stuff up. The new leader dismissed Rayes’ own explanation of why he became an Independent: the man didn’t like what he saw on offer from Poilievre during the leadership race.

Then he blamed worldwide inflation on Justin Trudeau:

Trudeau’s inflation is, of course, one of the unpleasant fictions Poilievre hopes to market to Canadians. The PM has some heavy baggage, as any third-term leader has. But Trudeau doesn’t own inflation, any more than Joe Biden does in the United States, or former British PM Boris Johnson did in the United Kingdom—other than in a cynical political sense.

Inflation is a global problem and Poilievre knows it. But in the politics of anger and blame, which will be the twin pillars of his leadership, there is no political advantage in the facts. Poilievre’s big bet is that “normies” are so pissed off with the price of gas and groceries, they are in the mood for some major scapegoating. What better scapegoat than the man currently on top of the political wedding cake: Justin Trudeau.

Unfortunately, many Canadians are unaware of how Poilievre became leader:

A very small number of Canadians, in a political party run by control freaks from the Harper era, made him leader. Poilievre does not in any way have a national mandate, just the overwhelming endorsement of a party controlled by his patron, Stephen Harper.

For all his championing of everyday Canadians, and the excesses of the “gatekeepers,” the man who has lived off the public dime all his working life is set to move into a mansion where the public will pay for his meals, his booze, and his entertaining.

With Poilievre in this country's future things look far from rosy.

Up 5 points in the polls (are for dogs) and (according to lap-dog media) attracting 'young people'.

I suspect that the Tory brain trust is following a strategy of making Poilievre look like a winner by blanketing everyone with B.S. Unless Canadians have the same blinkered approach to problems as do many Americans, the ploy stands little likelihood of success, Owen.

Of course, I have been proven wrong in my assessments many, many times.

They appear to be "flooding the zone," Lorne. Let's hope Canadians can smell horse manure when they see it.

"It seems the boys over at headquarters stuck their hand in the blender when they sent a text message to party members in the Quebec riding of Richmond-Arthabaska."

Well, remember, the Con HQ boys are suave, urbane world travellers and political science intellectuals from the enlightened rural areas of Alberta. That province is continually financially devasted by federal ripoff taxes for equalization, all of which when collected is sent to Quebec because Trudeau. You can't fool those prairie farmers -- they know what's going on all right.

They surely believe they do, BM.

People may be leaving the churches but quasi religious fanaticism soldiers on!
The perfect storm arrives as political B,S with it's false promises coupled with voter ignorance , apathy and an obvious disregard for anything that happens beyond the next pay cheque.
We are what we are and it does not look promising.

Organized religion is fading, TB. But it's being replaced by unhinged conspiracy theories.

Isn’t that picture breath taking? What a “Man Spread”! Does that man have a clue? Anyong

I doubt it, Anyong.