We Know Who He Is 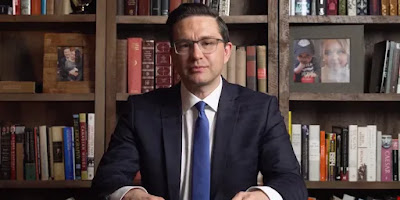 The date is fast approaching for the Conservatives to choose the next leader of their party. Nick Seebruch writes:

In less than two weeks the Conservative Party of Canada (CPC) will elect a new leader, and it is likely that person will be Pierre Poilievre. A poll taken in early August found that Poilievre had the support of 44 per cent of his party to be their next leader, while his closest rival Jean Charest polled at a mere 17 per cent.

Poilievre’s style as a politician over the course of his career has been one of a conservative attack dog. His campaign to become the next leader of the CPC has been particularly toxic due to his attempts to use disgraced former U.S. president Donald Trump as an example to follow.

During the course of his leadership campaign, Poilievre has stepped up his personal attacks on not only his political opponents, but like Trump, has chosen the media as a fertile field from which he can farm the outrage of his supporters.

We know who Poilievre is and we know what he wants to do:

He has made efforts to connect his campaign with far-right extremists. Most recently, he had been photographed with Jeremy MacKenzie, the de facto leader of the Diagolon cult. MacKenzie has gone on social media calling for the execution of Canadian Armed Forces personnel. He has encouraged his followers to harass health care professionals, and is facing assault and weapons charges in Sask., and weapons charges in N.S. in an unrelated case as well.

After the photo of MacKenzie shaking hands with Poilievre began circulating on social media, he refused to denounce MacKenzie or Diagolon by name instead stating: “As I always have, I denounce racism and anyone who spreads it,” then deflecting by pointing to what he called “. . .Justin Trudeau’s many racist outbursts . . .”

Republicans knew who Donald Trump was six years ago. But instead of shutting him down -- and scared of their own voters -- they decided to raise his flag and march behind it. The results are currently being played out in the American legal system. Poilievre has chosen Trump as a role model. A lot of people are sounding alarms. One of them is Bernie Farber:

“We try not to get into critiques on politics per se, but on issues and policy of hate,” Faber said in an interview with rabble.ca. “I’m taking a bit of a different track with Mr. Poilievre. Only because of his clear associations with the hard right, that I find a really clear and present danger to the country right now. That’s why we’re having a discussion.”

Farber pointed to Poilievre’s refusal to outright reject and denounce MacKenzie as dangerous and damning.

If Poilievre is the choice of the Conservatives, the party should be roundly rejected by Canadians.

I think its wonderful for Canadians to really see & judge Pierre Poilievre !
That’s a ‘Right & Freedom’ he seems to believe we don’t have,
or enjoy or are incapable of without his divine or devout ‘fixing’
Understandable, seeing as he’s always the smartest guy in every room

By the time he’s done his 3-4 year Vanity Campaign for Prime Minister
Canadians may know far more than the brazen lout counted on
Behaviour that cannot be countenanced in a General Election
Does that ‘worry the CPC High Table’ ?
He has the potential to take it all down.. no mistaking it ..
🦎

John Baird was Harper's attack dog - large, snarling, smart and dangerous. Skippy was always more of an attack rat - small, nasty and not especially smart. If the Cons think Canadians are ready to vote for having a caged rat strapped to their faces, they'd better think again.

I find myself frequently thinking of what Yeats wrote so long ago: "The best lack all conviction, while the worst/Are full of passionate intensity". Clearly, Owen, the Conservatives are counting on the worst to turn out in droves in the next election.

Recently at Cathy From Canada's blog I commented on PP and the Jeremy MacKenzie hookup, how Polievre pretended he didn't know who he was photographed with and that anyone could come to his rallies, yada yada, argle bargle. Laughable because the Conservatives are well known for vetting who comes to their rallies, as Stephen Harper had individuals who had attended other party's rallies removed from his as well as Carmya Sa'd being arrested by Hamilton Police when attempting to cover a Provincial Conservative rally there. Ms Sa'd even had a reservation to attend. I also noted the personal growth of Mr. Polievre, from being one of the Boys in Short Pants to now being a Proud Boy and his ambition to lead the Convoy Party of Canada.

He does have the potential to take it all down, sal. And it appears that the Conservatives are prepared to take the trip with him.

Honestly, Cap, thinking does not appear to be their strong suit.

It's also wise to recall the prophecy Yeats made in that poem, Lorne.

Wow
Again you get to buy/sell ballots to stuff your own ballot box and everyone just smiles?
Jagmeet did that in his quest to lead.
Kenney rigged his own coronation too
44% of conservatives is not a lot of Canadians tho
PP Pawliver has the appeal of using a toilet plunger to stir your soup,
and by attack dog you mean attack hairless chihuahua ... right?

If Poilievre is elected leader, perfect, the Conservative Party will be the Convoy Party.

The problem these days -- as Mitch McConnell has said -- is "candidate quality," lungta.

None thought Trump would lead the GOP but he did and then became President.
Could Poilievre make a similar impact in Canada?

If it happened south of the border, TB, it could happen here.

They're going to keep calling themselves "conservatives". Now all it takes to make the claim is to belong to the F-Trudeau segment of the electorate and run with the rest of the guys who found out that there was a thing called the WEF after Justin got his picture taken with Klaus.

Pierre's fanboys have obviously never checked out the history of his contributions in Hansard.

Pierre's fanboys don't read Hansard, John. In fact, I doubt many of them read to get their information.

Well, you reap what you sew, eh?

Bernie Farber's people have aligned themselves with the far right in Canada, the USA and much of 'the west'.

What goes around comes around, PoV.