Poilievre Is A Character Out of Orwell 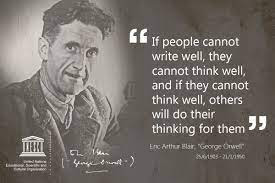 Pierre Poilievre plans to force the federal government to stop using overly complex bureaucratic wording by passing a law that will require the use of “plain language” if he is elected prime minister.

The Conservative leadership candidate is making this promise — his last policy announcement of the campaign — mere days before he might be confirmed leader of the Conservative party.

According to a press release obtained by the National Post ahead of release, Conservative leadership front-runner would pass the law to require government publications use the “fewest and simplest words needed” to state information but also require legal drafters to write laws as simply as possible.

“The Plain Language Act will make government writing and thinking simpler and clearer. The new rule will be that ‘everything should be made as simple as possible, but not simpler,'” said Poilievre, adding that the rule still leaves room for technical or specialized terms.

The law would only apply to new publications or existing publications that are being revised, in order to avoid the cost of “rewriting everything the government has already published.”

It would also make plain language skills a job requirement for new hires who are expected to write for the government and make sure bilingual language training for public servants teaches “language that ordinary people speak, not academic or bureaucratic jargon.”

Orwell knew that if you could reduce the number of words and their meanings, you could corrupt thought. And corrupted thought opened a Pandora's Box:

“In our age there is no such thing as ‘keeping out of politics’. All issues are political issues, and politics itself is a mass of lies, evasions, folly, hatred, and schizophrenia.”

Folly hatred and schizophrenia are what Poilievre is selling.

How reassuring to know that Pierre is just a plain-speakin' guy, Owen. His goal to use simple language will no doubt appeal to his simple-minded acolytes.

Our fellow citizens -- so many of them -- can no longer think their way out of a problem, Lorne.

That's rich for Skippy to be promoting simple language.This is a guy that practices"doublespeak" and will give him the hold over those more challenged in the art of speaking or the ability to practice critical thought. Then he will go after the "word elites" or the less simple people.Does this guy know no bounds to his buffoonery? Sheesh. It makes my brain hurt.

He's a buffoon, zoombats. But he's a dangerous buffoon.

“language that ordinary people speak, not academic or bureaucratic jargon.”
Talk folks talk, not schooly fedy talk?
I can hardly wait
He could lead by doing.
cAn We UsE tHiS sCrIpT?

Exactly, lungta. Just who makes the rules? When it comes to any language, that's not an easy question to answer.

Wow! I have never drafted a law but I have written things that have, very occasionally, been input into minor government decisions. There are times when one needs a very precise term or phrase. Dumbing down language seems a good way to really mess things up. There are times when plain simple language makes sense but not always.

I, also, tend to be a fan of the Oxford Comma. "I would like to thank my parents, Sir John A. and Queen Victoria" may be a bit ambiguous.

Sometimes, jrk, ambiguity can be a strength.

Without speaking for the francophones among us, this seems like a perverted exercise to force upon the language of near synonyms. My high school German teacher would not be pleased. Hitler had trained him to speak six of the major western European languages. When he came to Canada after WW2, he found it puzzling that native English speakers had little appreciation for the precision and exactness the English language (above any of the others in his experience) could offer them in improving their ability to communicate, if they would just learn a few more words.

English has become the lingua franca, John, because it adapts and grows -- not because it can be forced into carefully defined categories.