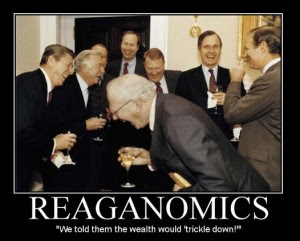 Last week, the Republicans released their campaign "platform." They called it a  "Commitment to America." Paul Krugman writes:

If you squint hard at the economics section of the Commitment to America, however, you can see the faint outlines of a familiar set of ideas — zombie Reaganomics. Which raises a question: Why are deregulation, benefit cuts and tax breaks for the rich still the ruling ideology of a party that now claims to stand for the working class?

First, it’s striking how many of the economic complaints are about things that are barely, if at all, affected by government policy, like the price of gas (which has come down a lot since its peak) and supply-chain disruptions (which have been diminishing).

Second, immediately after declaring that “we have a plan to fix the economy,” House Republicans say that they will “curb wasteful government spending.” As anyone who follows budget debates knows, that’s the ultimate weasel phrase. What spending are we talking about, specifically?

Bear in mind that the federal government is basically an insurance company with an army: The great bulk of spending is on health care, retirement and the military. You can’t meaningfully cut expenditure without attacking at least one of these. So which parts of that spending are wasteful?

Senator Rick Scott wants to get rid of the insurance company:

Rick Scott, the chair of the National Republican Senatorial Committee, has called for sunsetting all federal programs — including Social Security and Medicare — every five years, which would open the door to gutting America’s social safety net. Other Republicans have tried to distance themselves from that idea, although without removing Scott from his position. But again, what is this wasteful spending they propose to cut?

We've seen and heard all of this before:

We now have four decades’ worth of experience showing that deregulation and tax cuts for the rich do not, in fact, produce higher wages and faster economic growth. So the idea that tax cuts are the secret of prosperity should be dead, yet somehow it’s still shambling along, eating Republican brains.

For what it’s worth, financial markets share my skepticism. Look at what’s happening in Britain, where Prime Minister Liz Truss’s recent announcement of a Reaganite economic plan sent interest rates soaring and the pound plunging.

Billionaires may no longer run the G.O.P. the way they used to, but the party still wants their money. So plutocrat-friendly policies may be a way of keeping wealthy donors and corporations on board, even if many of them are uncomfortable with the right-wing social agenda.

The party still works for the wealthy. But it's added hate -- for all kinds of people -- to the mix.

Email ThisBlogThis!Share to TwitterShare to FacebookShare to Pinterest
Labels: The Republican "Platform"

It's added hate - for all kinds of people except the rich - to the mix. The purpose of the hate, of course, is to prevent people from identifying the real reason why wages suck, prices are rising, and work is increasingly precarious. The people at the top have hoovered up all the profits to be made from the poor, and now they're coming for everyone else. But let's spend our time arguing about chimera like critical race theory instead.

It's all a magician's trick, Cap. Misdirect by any means. And laugh all the way to the bank.

"Zombie Reaganomics" for a leson in RE 101 look to the UK under the new PM. It had already produced institutional chaos.

When do you think laws will apply to all those at the top, who break the law, who will be punished, and spend time in real jail. Wouldn’t it be loverly. Anyong

"Big money" has increased it's influence daily.
Sad that many equate big money with hard working success not guile .
We worship big money ; always have , thats why it blinds us.

There is a historian, Bret Devereaux, who did a series on the Spartans a few months ago. He suggests that their determined adherence to an unworkable socio-economic model took them from being a fairly major military power at say the time of the Peloponnesian War to a tourist village at the time of Augustus. https://acoup.blog/2019/08/16/collections-this-isnt-sparta-part-i-spartan-school/

One gets the impression that the US, the UK and, at the moment, the EU are doing the same. We currently seem to be doing very slightly better at the federal level but heaven help us if Poilievre gets in.

Devereaux, by the way, seems to despise the Spartans so he may be a bit biased in his analysis.

We equate big money with success, TB. There are better definitions of success.

When people forget that there are lots of things that money can't buy, e.a.f, they're doomed.

History is full of examples of societies which did themselves in, jrk. The stories almost always involve elites who forgot the obligations of citizenship.