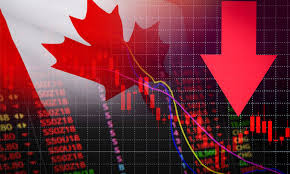 A recession, we're told, is just around the corner. Heather Scoffield writes:

Deloitte Canada joins economists at Bank of Montreal, Desjardins and Royal Bank in seeing two straight quarters of “mild” economic contraction in our near future — perhaps as soon as the fourth quarter of 2022 which starts in October.

Don’t worry too much, we’re told. It will be painless, and it may even be good for us.

Jobs, of course, are top of mind as soon as anyone mentions the R-word. Let’s not gloss over the fact that unemployment is near record lows. Canada’s labour market bounced back from the pandemic recession with surprising strength — a testimony to flexible and resilient employers and employees, as well as plentiful government support.

We are entering the downturn with a tight job market that has pulled in new workers and marginalized workers alike, buoying optimism for a more inclusive and diverse workforce over the long term.

So can it really be that bad?

There’s reason to be leery.

For one, the jobs bonanza of last year is over. Canada’s labour market has shed jobs for the past three months, and the unemployment rate rose to 5.4 per cent in August, albeit from a rock-bottom 4.9 per cent in July.

Brendon Bernard, economist at job-posting site Indeed Canada, has his hands on the day-to-day churn in hiring, and he still sees plenty of strength in the labour market. But it’s not like it was a few months ago. In May, for example, job postings were 74 per cent above their pre-pandemic levels. Nowadays, they’re 59 per cent above.

“We’re still in a job-seekers market, but there has been a momentum shift,” he says. “Things are starting to ease.”

Over at Deloitte Canada, chief economist Craig Alexander has just called a mild recession starting in the fourth quarter. He too sees a cooling of the labour market but, as long as things unfold as he expects, he is forecasting “recession with an asterisk.”

The main reason the economy is poised to shrink, he says, is because companies stocked up heavily on everything they could earlier this year in the face of supply-chain disruptions. But now, supply chains seem to be working themselves out, and companies have no reason keep their inventories high.

In other words, nothing to do with jobs.

The question is, how will governments react?

In the wake of a poorly conceived mini-budget in the United Kingdom that introduced deficit-financed tax cuts, global markets have gone into convulsions. Currencies are churning, bond markets are in turmoil and the Bank of England was pushed into “whatever-it-takes” mode, intervening in markets to counteract the damage.

In Canada, the central bank has signalled it will continue to raise interest rates even as momentum in the economy is slowing. Its attempt to crush demand so it is better in sync with supply is delicate at best, and poised to hurt many vulnerable workers at worst.

Email ThisBlogThis!Share to TwitterShare to FacebookShare to Pinterest
Labels: The Coming Recession

It's appalling that someone out there is describing 4.9 per cent unemployment rate as "rock-bottom." If you are one of those 4.9 percent you have a big problem.

Most of the people who write about unemployment aren't unemployed themselves, Toby.

Recession and perrier pawliver as the cure?
That means that people are impressed with the youtube unchallenged, unvetted shower thoughts of this lil barking weasel.
It also means that Canadians deserve every injury and indignity that they bring upon themselves.
Vote for the "freedum for the sociopath party' it will be fine
Jason Kenney, Dani suicide Smith, Doug Ford, pp Pawliver self-centred rotten to the core and ignorant Canadians expecting fine wine and miracles.

We are our own worst enemies, lungta.

And we seem to be building in the expectation of recession; why? DJF

Is the recession something which "happens" or are recessions "created". Its something to think about. Recessions are good for employers, they get to call the shots about salaries, benefits, etc. but when there is no recession and things are booming, workers have more control. It is doubtful that the raising of interest rates will do much for lower inflation, but it sure as hell will make things more difficult for working people, retirees, kids, etc.

Do recall signing a $30M mortgage at 19 1/2% for our housing co-operative. While we were building, interest was $50K a month. Sure didn't benefit us. Just the banks

In B.C. gas has gone up about 40 cents a litre over the past few days. Now that is inflation. Increasing interest rates isn't going to change the price of gas. People still have to go to work, but credit card companies will be making more money as more people have to rely on them to get to work and buying gas.

When the price of groceries go up, it just means more people will be food insecure and put greater pressure on Food Banks. People need to eat. They aren't going to stop wanting to, so how is increasing the intererst rates going to help the rising food costs.

The cost of housing, the house next door went from $2200 a month to $3000 a month when new tennants moved in. Its not a big house., So how will rising interest rates help here?

Last time interest rates went up dramatically up to over 20% people lost their homes. couldn't afford the mortgage payments? Who benefitted? Investors who bought their homes or the banks.

If the government wants to create more poverty in Canada, yes keep increasing interest rates. Of course as inflation and interests rates go up, basics of living get more expensive but senior's pensions don't neither do wages.

The people who set these rates and prices are out of touch with the real world. Perhaps it is time that it become mandatory for politicians to live on what citizens are paid, every year for 2 weeks.

When inflation goes up, e.a.f, so do interest rates.

Let's see ---derivatives as per the IMF are in the trillions---the Central banks has been plugging and printing money non-stop. See Wall Street on Parade for some raw-nerve info...and yet again as before 2008 our feds (matter not which party -flip-libs or flop - cons..the results are so far we--taxpayers loss --& still have not paid enough or pull enough corporations and banks out of their own mire---to rate value (like shareholders get) invest in and get value in real currency/shares out. I would love to send my taxes in if I could just once --pick which department or service/program my payment went or was part of. The least I would expect is not to have any thing applied to proxy wars---forever wars --all to enhance a foreign countries defense industry...like the US of A. What a bloody pity...

There is no doubt , in my mind, that the low interest rates that brought us to this point coupled with the inflation of real estate to provide some inflation for savings has been a disaster.
Could there be a connection to Gordon Campbell s real estate party ( BC Libs ) that encouraged foreign investments to what was reasonably priced accommodations to the now world wide phenomena of overpriced rel estate that drives people from houses to the streets?

There are lots of reasons to be cynical, Marg.