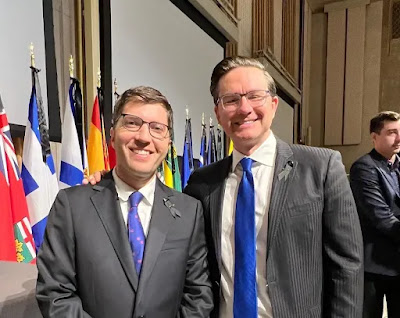 Following in the steps of the Orange Jesus, the Conservatives have gone to war with the media. Bruce Arthur writes:

First, let’s all hope Garnett Genuis is OK. You would hate to see the Conservative MP taking different routes to work, holed up in a motel, mattresses against the windows, worried for his life. You’d hate for him to feel unsafe.

That said, we should live in the real world, too. Every week the federal Conservatives seem to find a new way to make media the enemy, and this week one member of the media helped them along. Freelance journalist Dale Smith, who is often accused of being sympathetic to the government, watched Genuis pepper an inflation question with lyrics from Queen’s “Bohemian Rhapsody,” which was based on the largely imaginary crisis before this one, if you’re keeping track.

So Smith tweeted, “Genuis tries to includes lyrics from ‘Bohemian Rhapsody’ in his question, and I cannot adequately tell you how lame it is. When horses are this lame, you shoot them. #QP.”

Smith is said to have a tendency to irritate much of the Ottawa press corps, and this was a careless, irritating turn of phrase. But let’s be honest: any real-world interpretation of that phrase would not find any more violence in the tweet if Smith had said, say, break a leg.

But the Conservatives have decided media is the enemy, and that this serious moment in human history is a great college debate club game. Genuis, House leader Andrew Scheer and party leader Pierre Poilievre took public umbrage, and the usual right-wing press cranked up the outrage engines. There was some confusion, but it was clear the Conservatives asked that Smith be banned from the West Block on a security basis, and removed from the Parliamentary Press Gallery either temporarily or permanently.

Genuis asked the Speaker to rule whether Smith’s tweet impacted his ability to do his job, which could open a big parliamentary can of worms, or give the Conservatives a chance to complain the system is rigged against poor ol’ them.

Smith's tweet was stupid. There's a lot of that going around these days. But the Conservative response was pure theatre:

This is such patently empty and performative grievance that it’s a wonder CPC members didn’t stock up on fake blood. You might note the obvious asymmetry between the parameters of political rage — the convoy, for instance, was deemed a national security threat by law enforcement, and the Integrated Terrorism Assessment Centre confirmed that, involving specific threats to at least four ministers. You could point out the Conservative Party itself has embraced the convoy, and all the anti-public health, media-hating rage that came with it.

And even if you could put all that aside, you have to have a child’s sense of cleverness to consider this a real-world gotcha. It’s like saying that because someone said speak of the devil, they were summoning Satanism. Scheer tried this before, pretending that referring to political defenestration meant encouraging murder via open windows. Maybe, somehow, he even believes it.

That's what politics have become these days -- pure theatre.

Email ThisBlogThis!Share to TwitterShare to FacebookShare to Pinterest
Labels: The Conservative War On The Media

I thought it was rather amusing. But I grew up on a farm where that was a common joke.

If a politician is going to be making a horse's ass of himself then he should expect a bit of harmless criticism.

I had not thought Polievre could sink much lower in my esteem but, to mix my metaphors a bit he's still digging.

My sense is that the Right in general keeps sinking lower and lower, jrk.

The shameless hypocrisy of the CPC is stunning, Owen, no doubt presaging their strategy in the House until the next election.

The Conservatives are shameless, Lorne. It's obvious that they know no lows. They will do whatever it takes to get their way.

Conservatives so clever they outwit them selves. All of them elevated beyond their intelligence.
There must be a humor variation of the dunning kruger effect. This is the gw bush fart joke/trump grab them by the pussy/pawliver mini-me monologues that rally the down in the dirt/stick it to the elite crew.
Policy -no, platform-no, budget-no ... just childish antics only a parent could love.

The children have taken over the party, lungta.

Why does the media take this nonsense at all seriously? They should be asking Genuis when he'll be withdrawing his ridiculous complaint to the speaker.

Editorial cartoonists should be having a heyday with this, Cap -- particularly with a guy who goes by the name of Genuis. Transpose a couple of letters and he becomes "Genius."

The theatrics of Genuis were all about the Attention Economy
.. nothing more ..
Another brief bit of it anyways.. amen

He stood up & squawked ..
His Riding Electorate must think.. uh
Well they must think something .. !

they elected him.. for some reason ..

It’s my belief Canadians should or could wake up to the grim reality..
What or When referrals or reference are made - to ‘media’ or ‘MEDIA
we really need to DIFFERENTIATE.. ‘the Press’ or ‘the News’ from PROPAGANDA

Anyone thinking Brian Lilley, Lorne Gunter, Licia Corbella, Ezra Levant, Lorrie Goldstein
are ‘Journalists’ must be living downwind & downstream of abandoned septic tanks
or investing in property downhill from Tar Sands tailings ponds
because of the view & access to freshwater..

We should be way past ‘toleration’ or ‘free speech’ or Freedoms of Opinions
These are sold out PARTISAN wreckers.. ‘flooding the zone with shit’ - DAILY
& delivering the mail for Steve Bannon..

Incremental Coup D’état? Of Canada ?
Via buying & controlling Media ?
There are no rules in such a toxic environment

We need come in the false dawn..
or High Noon.. & count many coup..

If the quote had been attributed to Mark Twain it would have been called political satire. These asshats need to lighten up and do a days work.

It can't be fun to be a public embarrassment, sal.

There are lots of propagandists masquerading as journalists these days, sal. A good maxim is to follow the money -- and to discover its source.

I saw the film when it first came out. It was a study in desperation, sal. And it left its mark.