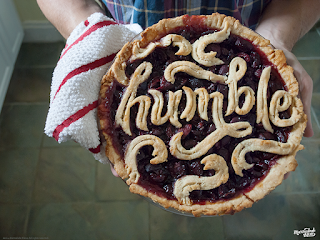 The federal election was a teachable moment. And, if our leaders are wise, they'll understand that they have all been served a heaping helping of humble pie. Susan Delacourt writes:

Two weeks after the votes were counted, the point of the 2019 election is finally coming into focus: it was ultimately a humbling exercise for Canada’s political leaders.

In just one week, three of the major party leaders have been forced to reckon with humility at their first post-election caucus meetings in Ottawa.

The Greens’ Elizabeth May self-administered her own dose of humility, stepping down as leader on Monday. A chastened Justin Trudeau met his diminished Liberal ranks on Thursday, talking about the “gratitude” he would be extending to the nearly 30 former MPs who went down to defeat on Oct. 21.

As for Andrew Scheer, his humbling remains a work in progress. The Conservative leader was still talking in triumphal terms after he met his new caucus of opposition MPs on Wednesday, but a looming leadership review in April means that Scheer will be taken down a few pegs the slow way over the next five months.

Even New Democratic Party Leader Jagmeet Singh, who was judged to have had a good election, has been forced to acknowledge that all his campaign efforts still resulted in a sizable net loss for the NDP — from 39 MPs going into the election to just 24 now.

Canadians have their own fondness for knocking high-reachers down to size. It’s said that the legendary author Robertson Davies liked to recount what he heard at a 1957 social gathering when the news broke that future prime minister Lester Pearson had won the Nobel Peace Prize: “Who does he think he is?”


Individual MP's seem to have gotten the message:

Francois-Philippe Champagne, the infrastructure minister who was one of the lucky Liberal MPs to hold onto his Quebec seat, told reporters that he had certainly taken this “message of humility” from the 2019 campaign. "We're not here boasting. We're here humble,” Champagne said as he went into Thursday’s Liberal gathering.

There were many poignant scenes of defeat around Parliament Hill this week. The Conservatives’ former deputy leader Lisa Raitt, who lost her seat in Milton, Ont., was talking about packing up her boxes and the unemployed staff members in her midst.

Former Liberal MP Kim Rudd, who fought hard but lost her seat in Northumberland-Peterborough South, came to town to empty her office and apartment, and talked of her sadness in seeing Canadian flags disappear from offices that have been handed over to a new crop of Bloc Québécois MPs.

Winnipeg MP Jim Carr, who still holds the job of trade diversification minister in Trudeau’s cabinet, showed up on Thursday despite his recent diagnosis. He was in a reflective mood, talking of perspective both political and personal.

“I’m feeling fine, thank you,” Carr said, clutching a daisy handed to him by cabinet colleague Maryam Monsef while he talked to reporters. “I’m just in my life now, going through a moment where I think it’s bringing out that yearning for unity and for civility in politics.”


They say humility is good for the soul. At this point in our history, it would also be good for the country.

Image: dribbble.com
Posted by Owen Gray at 8:32 am

As a general rule, humble people don't seek political power and the trappings that come with it. This bout of humility will soon pass.

I suspect you're right, Cap. The tragedy is that humility usually improves your sight.

.. humble.. appreciation .. ooh, hmm.. I thought attributes like that were 'all of a thing'.. rock solid folks who influenced me over the years.. were exemplars. I just didn't know it yet. I assumed most everyone behaved the same way, with a few exceptions, the bad apples, losers who were transient .. as I learned to avoid them.

I see our humble 'Leader' of the Official Opposition .. with his grand 'Vision for Canada' will soon embark of a country wide 'listening tour. Sounds like an element of 'humble' .. is being suggested there along with a dose of the good old prairie boy upbringing in Ottawa, in a hardscrabble family with no car cuz they could not afford one (in the background I hear Levon Helm & The Band wailing 'Acadian Driftwood, gypsy tailwinds' and stark imagery of Dorothy Lange.. and the dustbowl..family life)

We know Andrew Scheer still scrapes by in his humble way. Reluctantly letting the rest of Canada bail him out. So I will ask some blunt questions shortly. But in the meantime, in dire straights, Andrew and his brood totally seven surely live in hand me down clothes, no running water, own no car, get by on donated food and drink from caring Canadians.

Of course I jest..

Who exactly is going to pay for such a humble man and a few stalwart evangel volunteers, to leave the great prairie and venture where only shrill partisans sprout from the very earth.. deary me, the bravery.. like the courier de bois in canoes and bateaux.. but with a camera crew and photogs, they will soar through the air in a great jet.. to dress like fishermen, farmers, roughnecks, teachers, nurses, carpenters.. and capture the very essence, verily 'see the wind' .. climb mountains, survive the badlands, be humble in the sweat huts of First Nations, do the hokey pokey.. walk out of the cornfields with baseball gloves.

Ah the questions, do Canadian taxpayers get a rebate re the sackcloth and ashes journey of Andrew Scheer's 'getting of wisdom' ?? Is this intrepid journey on OUR dime? The cost ? How much ? Again, who is paying for this pilgrimage of a tone deaf, hard of hearing career political animal ? Surely Jason Kenney will donate Albertan tax dollars to the cause. Doug Ford ? Earth to Doug.. is there anybody in there? Can you hear us? Do you even listen?

Sure looks like a travelling medicine show to me. A posturing preaching photo op and media Scheerapalooza song n not at all humble dance.. posturing and preening. and pretend 'public service' Potemkin Villages media op n hop. We just don't know 'who pays' .. how much.. and what it has to do with either his riding.. or the rest of Canada. Is it during his holiday time off ? Or is it just Canadians paying for Andrew's Excellent 5 Star Adventure, all expenses paid, 3 delicious squares a day.. a blight of media exposure.. I had never realized 'humble pie' was so fattening.. must be the same diet Stephen Harper endorses..

You rightly point out, sal, that there is a difference between true humility and fawned humility. It isn't that hard to tell the difference.

Crocodile tears from the briefly "humbled", that's all. They'll soon be back up to self-righteous speed.

Scheer during the campaign was incapable of admitting anything about his personal views which seem to be roughly on a par with the UCP of Alberta, now all set with the introduction of a private member's bill to tread on women's rights. Austerity is baked in there as well with Kenney so that the poorer population can pay the rich their $4.5 billion in tax cuts. That's all Conservative policy is, a big vat of control and nothingness, the control to bash unions, women and the LGBT community, and to humble regular folks with cuts to social services while pilfering their meagre pockets to pay homage to the elite. It's nasty stuff, and you really wonder who can believe in such policies but the truly paranoid whose native logic has deserted them, replacing thought with slogans.

Every time in the canpaign I saw Scheer he was "shifty" until I realized he couldn't logically argue his way out of a wet paper bag on anything whatsoever, so dull of intellect he couldn't invent further analogies to explain his point, merely repeating the same words over and over. Worse than useless.

Minor sub-pope Kenney of Alberta has plausible deniability, he thinks, to say a private member's bill isn't his government's. Right. "And I scarcely remember handing out anti-abortion leaflets as a student in San Francisco or wherever it was I never finished a college degree." Another whacked-out religious retread eager to reform society in the regressive direction, where the Big Man requires respect and a jump-to-it response from the serfs to his orders.

Whether Catholic or bible thumping, the West and rural Ontario serve to remind us all that there is a big brother mentality out there based on telling other people how to behave. No gays, transgenders or women seeking abortions will be allowed, and those that feel that way will have to atone for their sins, seems to be the message. Oh and by the way, we need pipelines to carry our poison to tidewater tout-de-suite, how's my French? and what's climate change, anyway? The rest of the country should be like us is the current whine, while Alberta is like the proverbial one-industry encampment of yore, that when it ran out of resources, turned into a ghost town. Zero planning for the future, only a mindset to dig up what they've got till it's all gone and damn the consequences.

Seeing as Scheer was such a dope and a closet yankee to boot, and still got 33% of voters, apparently one-third of the population wanders around in a daze missing the boots and heels of authority of eras past. I see no other way of interpreting the nonsense we face from Conservatives/Reformers. Progressive Conservatives are still salveable because they're essentially Liberals, who occasionally show pangs of conscience but are never in a rush to lead the way, meting out minor allowances in a grudging manner. When they actually do, they accompany it with a giant fanfare that they're so noble.

We are certainly going through a rotten period of politics in this country. Oh well, the summers will be hotter, droughts more common here, storms more common there. Enjoy yourselves. Look at Australia burning to the ground. There's climate change even a fool could observe, but the sale of horse blinkers has reached an all time high to compensate. And I'm not all that struck on media pundits, either, who may now and then espouse some point we individually find dear, then blow it next time and show they really didn't get it. Time to think for ourselves.

It is, indeed, time to think for ourselves, BM. But, then, I thought that's what democracy is all about.