Of Course They Laugh At Him 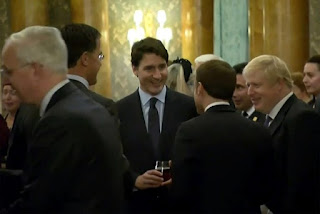 Collective horror is sweeping the press. The leaders of NATO were caught laughing at Donald Trump  behind his back. Susan Delacourt wonders what it's all about:

Did you hear the one about the world leader behaving badly at the NATO summit?

In what truly is a sign of just how much Donald Trump has disrupted the rules of political diplomacy in three tumultuous years in office, the punchline to that joke is not Donald Trump.

Instead, the bad diplomatic behaviour award at this week's NATO summit is being given to the world leaders — including Canada's own Prime Minister Justin Trudeau — who made the mistake of reacting to the perennially outrageous, unpredictable U.S. president.

That's just how things seem to work around Trump — he yells, and those who whisper about him are deemed to be the problem.


In the United States, late night comedians are having a heyday doing the same. And, in Washington, he's being impeached. Did we really think that world leaders didn't mock Trump behind his back?

There is another way to see the conversation at Buckingham Palace — as a totally sane, normal reaction to a politician who breaks all the rules of standard political behaviour, both at home and on the world stage.

The snippets of conversation overheard from that cocktail encounter were not that much different from observations being made Tuesday night on CNN (granted, Trump's least favourite media outlet) when hosts such as Chris Cuomo remarked on the president's highly unusual and undiplomatic behaviour at the summit.

Diplomacy, of course, dictates that world leaders don't laugh at each other — unless, of course, you're Trump, who thought the funniest thing about the whole incident was the name he called Trudeau after hearing about the video.

"That was funny when I said that guy was two-faced," Trump said Wednesday.

This is, we'll remember, a bit of a repeat of what happened after the G-7 summit in Quebec in 2018, when Trump got annoyed at how Trudeau talked about him after their meeting. On that occasion, the president called the prime minister "weak" and "dishonest."

What did Trudeau do to incite Trump's wrath back then? He spoke out against U.S. tariffs against Canada — which is what you would expect a Canadian prime minister to do. But that story quickly became one about Trump taking offence, rather than one about what prompted Trudeau to make the remarks in the first place. Excuse the seasonal reference, but apparently this isn't like that scene in the Christmas film "Love Actually," when the British prime minister is lauded as a national hero for calling out the bully president.


Pompous asses should be laughed at -- pompous fools even more so.

Email ThisBlogThis!Share to TwitterShare to FacebookShare to Pinterest
Labels: Trump The Brunt Of NATO Jokes

I agree, Owen. It's a sad comment on the rest of our "liberal press" that Trudeau is being criticized for a completely normal reaction shared with the heads of other allies.

It's a sign of how and why Trump has got as far as he has, Cap.

Macron is the hero of the piece. after his ' stuck in an elevator with Don Cherry ' near death experience he managed to say that the 'Emperor has no Clothes '. It's only natural that the rest of the leaders rallied round to congratulate and support him.

I agree, rumley. Macron is not afraid to confront Trump head on.

Richard Wolffe's take in The Guardian today is definitely worth a read. Remember, this is the same asshat who left a 92-year old woman standing outside for 15 minutes to greet him during his state visit. He couldn't bother to be on time to meet the queen. And Ivanka thinks he'll be her springboard to be inaugurated America's first woman president. Ha.

Thanks for the link, Mound. World leaders know the Emperor has no clothes. Only Trump is unaware of that fact.

It ought not to be a surprise to any one that other world leaders joke about dtrump. He's an idiot. He is a mean nasty person, in my opinion, who can't take a joke and likes to put children in concentration camps.

As to the Canadian media criticising Trudeau, aren't some of their stock holders American companies. The Canadian media would like to see Trudeau exit, and replace him with Scheer. However, that isn't going to happen and the majority of Canadians understand other world leaders laughing at dtrump. I'd love to hear Ms. Merkle on the topic of dtrump. just the look on her face from time to time, tells a story.

What is of course interesting is there are two world leaders from English speaking countries, one French speaker and one Dutch speaker. They all speak more than one language. dtrump can`t even speak English properly. he is a joke. let the other world leaders have a good laugh. the rest of us do it and most nights half of north America is watching the comedians on the late night shows laughing at dtrump.

You're right, of course, e.a.f. These days, there's nothing unusual about laughing at Trump.