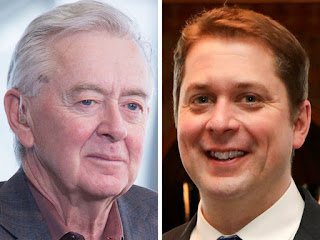 Michael Harris writes that Andrew Scheer will have to go. Canadians know he's a fraud:

I don’t know what Scheer’s vacuous grin was supposed to convey during the campaign. But if it was to give the impression of the benevolent guy next door, the one who would help you shovel out after the blizzard, or look after your cat when you were out of town, it flopped.

Scheer was slippery as an eel on the abortion issue, adrift on same-sex marriage, sneaky about his dual citizenship until he was outed by the Globe and Mail. He also failed to convince voters that he wouldn’t take a chainsaw to social programs if elected — just as political cousins Doug Ford and Jason Kenney have already done in Ontario and Alberta.

And then there was the devious way he released his costed campaign platform — after the TV debates. Even the day he chose was sneaky, the Friday before Thanksgiving. You know, the day everyone is obsessing about whether it will be broccoli or Brussels sprouts.


But Scheer isn't the biggest problem the Conservative Party faces. The number one problem is the party's platform:

So Scheer has to go if the CPC want to rise from the ashes of the 2019 election. But that is a small part of the job, and by far the easier part. There will be no shortage of replacements waiting in the wings but it can’t be the darkest part of the right wing. It can’t be Peter MacKay, who lost his progressive credentials ten years ago, or John Baird, who never had any. And it can’t be the man they both served, Stephen Harper.

As Philippe J. Fournier notes in Maclean’s, “among the 60 electoral districts with the highest population density in Canada, the Conservatives won a grand total of zero.” In other words, the route to victory these days is by appealing to the educated, urban and socially progressive, not a cabal of gun-loving, climate denying, xenophobic, northern Republicans who have never seen a social program or a foreign aid plan that they didn’t want to cancel.

Stephen Harper used that group as his base for the near decade his party was in power. Even then, the only time the CPC could produce a majority government was in 2011, when the NDP pulled off the Orange Miracle, copped 30 percent of the popular vote, and got more than 100 seats in parliament. Without a strong NDP, the CPC is a regional party constantly brushing up on its skills at undermining democracy at every election.


The man who is the godfather of the Conservative Party -- Preston Manning -- knows how the party needs to evolve:

Preston Manning understood the need for policy renewal when he told me that the two key issues that move millennial voters are social justice and the environment. The man who founded the Reform Party and gave Stephen Harper his first job said that these should be “sword” not “shield” issues for Conservatives.

Which is another way of saying that the absolute worst thing the CPC could do is conclude that the path back to respectability is merely about changing the messenger, not the message.


Will the Conservatives follow Manning's advice? That's an open question.

Email ThisBlogThis!Share to TwitterShare to FacebookShare to Pinterest
Labels: The Future Of The Conservative Party

The Cons will follow what Manning does, not what he says. Manning is behind astroturf group Canada Proud and Strong that he uses to get around political advertising laws. If you want to see what Manning really thinks about the environment, look no further than that group's campaign of robocalls, Facebook and text messages to undermine the carbon tax. https://www.cbc.ca/news/politics/manning-centre-proud-1.5307111

Thanks for the link, Cap. It appears that Preston is working both sides of the street.

.. Michael Harris.. as usual, bang on with his perspectives and timeliness. As always, fearless

Looking over the wreckage post election.. I fail the see the 'Public Service'.. I must be senile, presuming that's what elected 'Public Servants' are elected and paid handsomely to deliver. And that is The Prime Directive - riding to riding and within the hallowed walls of our archaic and outdated confused and partisan Parliament. There is a huge difference between a Public Servant and a Political Animal.. we don't seem to get the former, we only get the 'whipped' partisan latter. If I missed the boat and drove off the ferry dock.. I would not only look loke an absolute idiot.. I would likely be given a breathalyser test and have to pay for the rescue and the raising of our vehicle then the towing and repair.

I hope we are gifted with many many more fine editorials from Michael Harris. He puts our various Fife's - Ivisons - and various panelists to shame. Partisan pond scum like Brian Lilley & Lorne Gunter, the vapid Margaret Wente or the various PR flacks of each Party's retained advisors and spokeswanks are not qualified to polish his shoes

One of the big issues for me is that these political animals are in the express lane to multimillionaire status. They have access to privileged advance information re impending legislation or upcoming trend or news etc. You cannot tell me it does not slip out at home that a pipeline will be purchasd or a humungous militsry contract will be awarded, or a new twr sands operation will be approved. How else do these twits become multimillionaires so fast ? One assumes they all have 'wealth managers' .. etc etc.. so why do they call them 'blind trusts'.. if the wife or husband or trustee.. can golf or curl or lunch with such managers.What ? No quid pro quo ? Aw c'mon..

Is that supposed to be 'Public Service' ? Oh.. ! Andrew Scheer absurdly tried to claim he knew well, the trials of paying bills and rent.. trying 'to get ahead' .. cry me a river Mr Multi Millionaire.. he's a welfare queen and lied about his working life.. Good grief.. most of them are.. full of it is the term.. they talk the talking points, never wil or or have - walked the walk..

I read that, when Harry Truman decided to walk away from his presidency, sal, he had to borrow money to get back to Missouri. Those days are long gone.

My wife and I are legal and law abiding firearms owners and belong to two fish & game clubs.

We don't hunt but we love going to the range.

We've never voted Conservative and NEVER WILL, no matter what.

So much for Philippe's rant

Unfortunately, the politics of division is alive and well in Canada.

Unfortunately, we don't see characters anymore, J. We see charactures. There is a place for editorial cartoons. But, in the end, unless we can deal with each other honestly, we'll make no progress at all.