A Minority -- But For Whom? 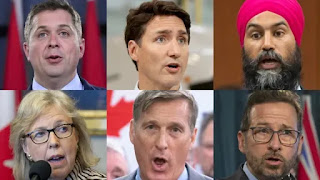 Chantal Hebert writes that a minority government looks more and more likely -- largely because of the resurgence of the Bloc Quebecois:

From a Quebec perspective, the argument that the Bloc is not a valid option because it will not have a seat at the government table is little more than a variation on the contention that a vote for the Greens or the New Democrats is — for the same reason — a wasted one.

The Conservatives went into the campaign looking to gain ground in Quebec. They may have to consider themselves lucky if they manage to keep the dozen seats Scheer inherited from Stephen Harper.

At this point, Quebec is more likely to split the bulk of its support between the Liberals and the BQ than to divide it four or five ways.

With Canada’s second-largest province potentially poised to take as many as half of its seats out of the battle for government, the victor on Oct. 21 stands to be determined by the outcome of scores of closely fought battles in the rest of the country.


And, in the rest of the country, Jagmeet Singh is a wild card:

That being said, it would be risky to overstate the NDP’s potential to split the so-called progressive vote in favour of the Conservatives.

In Ontario, for instance, a Léger poll done after Monday’s English-language debate showed NDP support hovering at or around its 2015 election mark.


So, at the moment, it's hard to see either the Liberals or the Conservatives gaining a majority of the seats.

Where does that leave the Greens? Stay tuned.

CBC poll tracker's now showing the Cons ahead in projected seats for the first time in the campaign. The Libs will be pressuring everyone who hates the Cons to vote "strategically," i.e. ignore all the broken promises on progressive issues, hold your nose and vote Lib.

No thanks, withholding support is the only way we have of showing our outrage at voting once again in a FPTP election after the PM paid American crooks billions for
a rickety planet-killing pipeline that even Big Oil wouldn't touch. If that sees Scheer in the driver's seat, so be it. We wouldn't even be close to a Con minority if Trudeau had delivered on electoral reform. Trudeau doesn't get to call himself progressive while catering to rich Liberal cronies, banks and oil companies.

Rant over - I'm off to the advance polls.

Having lived through the Harris years and the Harper years and now the Ford years, Cap, I cringe at the thought of the Scheer years.

This is not an easy election, Cap. But not voting is an abdication. The more people who vote, the more legitimate the decision.

.. the Boss found a Youtube vid of a kind of townhall for our riding, we missed it while at a Leaf game. The Conservatives blew it off. This has been an NDP riding but went Liberal in the last election. It was not a debate.. questions were developed from student polling. There was an idealistic Independant, a young Communist candidate I thought very interesting, an Animal Party 80 something year old, bravo!, an NDP of vast social concern experience, a Green I thought well of, and the incumbent Liberal who was very polished & safe

This was exactly what we wanted.. to see and hear the candidates and their brief responses on a variety of topics.. but the wuestions missed the boat re the potential concerns of this riding, other than climate action? I'm not terribly enthused. The other day I was working in the Beaches and Nathanial Erskine-Smith was door kmocking with his father, a former Malvern High teacher.. Now there's a riding with at least one credible, young, experienced candiadate.. don't know who represents other parties. It too used to be an NDP stronghold.

As I commented to Mound this ayem.. politics has become quite disturbing.. with people 'voting the party' or 'voting the party leader' .. partisan activity and opinionation has gone crazy via slcial media.. its a wildfire. Add 'black ops' strikes and war rooms, election frsud, live and robo calling, dark donor money and captured or sold out mainstream media.. and its a recipe for corruption.

The laugh of the last week was Conservative messaging, telling North York campaign caltskns to pull all volunteers off the doors.. and tell them to attend the Andrew Scheer rally.. there was no note of politness in the message..quite the opposite. Heee we go.. Potemkin Pretenders to fill out the background.. behind a pretender ..And get a gander at PostMedia, a foreign owned predominant media company pimping via its front page as the election draws near.. Its toxic, its antisocial, its crude.. its astonishing snd blatant.. its also disgusting & un-Canadian

It may leave the Greens no where and some what irrelevant. May has indicated she will not support a government which does pipelines. Trudeau bought one and you can bet you last dollar Scheer will fold into whatever Kenney wants. Further more if May supports the Cons. she will loose a lot of votes next time because the Cons are going to be Cons and do what Harper and Mulroney did previously, tax cuts for corporations and the 1%ers and service cuts for the rest of us with lay offs in the public sector. May and any other Greens elected may support which ever party on a case by case basis, but if the Greens only do that, they won't get far, in my opinion.

The Bloq, well they'll support whomever will give Quebec the best deal. Their leader has been clear, no pipeline through Quebec.

Personally I'd vote for just about any thing to avoid the PPC and Cons coming into office, even if Trudeau and his Liberals broke promises. All politicians break promises. No adult ought to believe them on every thing. They do what is expedient for them and their party. The one thing Trudeau did, which the Cons would undue, would be the child benefit cheques. That raised at least 250K children above the poverty line. The Cons are big on tax deductions and such, but that doesn't pay the bills, put food on the table or a roof over your head. When you ask families what would you do if you lost the child benefit cheque, the response is usually, "we'd be in trouble".

In my riding its not an issue, the last by election the Liberals came in 4th. Its between the NDP and Greens, although the Greens won Nanaimo with the Conservatives coming in second. However, it having been a by election, many did not vote.

4 yrs of Scheer is more than I want to think about. I remember the Harper and Mulroney years too well.

Politics has become very, very nasty, sal. I have to keep reminding myself that the issue is -- or should be -- who is the best candidate in my riding?

I understand May's opposition to pipelines, e.a.f. But she may have backed herself into a corner. In a minority government, deals -- unseemly though they may be -- will have to be made.