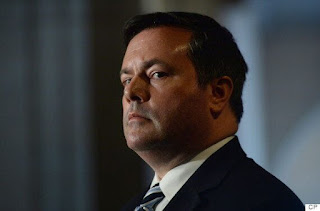 The day after the election, Jason Kenney set his sights on Ottawa. Linda McQuaig writes:

Only a day after Monday's federal election, the Alberta premier was in full battle mode, honing his mission to defend the oil industry, stir up Western resentment and stick it to Justin Trudeau's freshly wounded Liberal government, now reduced to minority status.

Keen to depict anyone not swearing fealty to the oilsands as a traitor, Kenney will paint Canada as a country plunging towards disintegration if Ottawa fails to expand pipelines and end the carbon tax.


But Kenny ignores some uncomfortable facts. The first is that Alberta has been giving the oil industry an easy ride for a long time:

Certainly, Alberta politicians have found it effective to blame Ottawa, thereby directing any popular resentment away from themselves -- for their failure, for instance, to drive a tougher bargain with the multinational oil industry, as Norway has done.

Although Norway and Alberta both have generous oil deposits and small populations, Norway has driven a far tougher bargain with Big Oil, demanding a much larger share of oil revenues for its people.

As a result, while Alberta has built up a heritage fund for Albertans worth $18 billion, Norway's heritage fund is 60 times larger -- worth $1.3 trillion. That translates to about $260,000 per Norwegian, making recent declines in international oil prices -- and the world's eventual transition away from oil -- less worrisome in the Nordic country.


The second fact is that not everyone in Alberta and Saskatchewan voted blue:

30 per cent of Alberta's popular vote (and 35 per cent of Saskatchewan's) went to candidates who weren't Conservative -- which would have resulted in numerous non-Conservative seats under a proportional representation system, which many Canadians thought they would get after Trudeau promised electoral reform in his 2015 campaign.

The appearance of provincial unity helps Alberta's politicians make the case that they speak for an aggrieved province, unified against Ottawa.


Neither of these facts makes Trudeau's job any easier. But, as you listen to Kenney rage, remember that his memory -- like his use of facts -- is highly selective.

Image: HuffPost Canada
Posted by Owen Gray at 9:07 am

Email ThisBlogThis!Share to TwitterShare to FacebookShare to Pinterest
Labels: Kenny and Trudeau

Fully 96% lf Canada's vast petroleum or 'oil' reserves.. are not oil. They are Bitumen, a granular petroleum loaded substance much like brown sugar in consistancy. Aside from the deposits accessible close to the surface.. the great majority are 'steamed' up, 'in situ' and require astonishing amounts of free fresh water to process into 'diluted bitumen' which if heated or warmed will flow in collector pipes to actual pipelines. Primarily to Washington State, California via pipeline and/or supertankers only half filled in order to clear Second Narrows out of Burnaby BC.. and transit The Salish Sea. Yes, some is upgraded in Alberta or other provinces and also directly south from Hardisty Alberta to US Gulf Coast refineries. Canada buys back, refined petro products.. aviation fuel, gasoline, solvents, diluents..

Did I mention vast tailings or settling 'ponds' result.. hint - it aint freshwater - no more than what freshwater used in fracking emerges as fresh water.. its all toxic waste.. including all seepage, leakage and processing residues

That is it folks.. one such 1/2 filled supertanker went to South Korea as I recall.. Shipping News and various other seafaring sites report this stuff.. ie 'dockage' departures, transits.. it aint brain surgery to find such info.. or sinkings, groundings, collisions, port explosions.. whether Dilbit or LNG. Many a retired supertanker sea captain will speak to the most dangerous waters on the planet just off Haida Gwaii.. never dance with the devil.... 20-45 foot seas ? Hell, we get them on Lake Superior.. 'the gales of November come early' .. Gord Lightfoot.. who will not take a dime, that does not go directly to the sailors descendants.. nor accept any use of the song other than to their benefit .. of The Edmond Fitzgerald. The Boss's word is final on this matter as is Gord's .. always has been

Thanks for the spelling correction, sal. It's not the first time I've made that mistake. It appears that I'm a slow learner.

Here are some other facts worth pointing out:

- Kenney was a cabinet minister in the Harper government which failed to deliver pipelines when it would have made a difference.
- Alberta's economic woes are the direct result of the free market and global oil prices. Compared to other sources of oil, bitumen is expensive to produce and to refine. It will always be a risky investment.
- The major energy companies are selling their Alberta energy plays at a loss: Norway's Statoil, Imperial Oil/Exxon, Conoco Phillips, Marathon, Shell and even Koch have all bailed out. They don't predict a return to profitability and there is nothing Trudeau or Kenney can do to change that.
- Short-term oil contacts now pay out more than long-term ones. This means investors will continue to stay away from investments in Alberta that take a long time to return a profit.

Kenney is engaging in bad-faith partisan politics and a properly-functioning media would be reporting it as such. Instead of click-bait headlines like "Alberta threatens to separate," we would see "Kenney blames Trudeau for slump in global oil prices." This would properly frame Kenney's arguments as the BS they are and better inform Canadians about the urgent economic need to move towards alternatives to oil production.

All excellent observations, Cap. Unfortunately, too many people -- like Kenney -- are simply mad as hell. They can't come to terms with the facts. And those facts are right before their eyes.

They let these oil guys get away with a mistreatment of water and disrespect for the resource of a type that was put into check in other industries a couple of generations ago. While supporters of the decision to engage in this process of neglect will claim that the cost of acceptable treatment would have been prohibitive given the massive quantifies involved, the magnitude factor should have recommended another set of decisions to anyone with common sense. Let's demand to hear what Jason has to say about that every time he starts to carry on about alienation and secession. Push him out of this new cozy zone he's found.

I read that newly developed automation has reduced the number of potential jobs in oil sands work anyway. So even if economic conditions were perfect, the jobs still wouldn't be there the way they used to be.

Alberta has also been killing off other industries, like cattle breeding and farming, for instance, in favor of oil mining. They have also failed to foster new industries because they are so addicted to and obsessed by oil. Also there is a lower percentage of high school graduates than in other provinces.

Albertans are the authors of their own problems to a large extent. They had a big opportunity when oil prices were high and good paying jobs plentiful and they blew it. Mining is by nature cyclical.

Jason is quite sure of who he wants to blame, John. But acknowledging and accepting responsibility for mistakes is not his thing.

Peter Lougheed knew it was a mistake to bet the farm on oil, ffd. Unfortunately, those who followed him were not as wise as he was.

CBC, for some reason, is hyping the 'Wexit' business now suggesting eastern BC might go with Alberta.

Go to where? Unless they took the coast by force they would still be landlocked. I can't imagine Ottawa allowing them to simply take the coast.

Then there is the negotiation we business we dodged with Quebec. Who gets what? Who owes whom? It's the issue that Britain and the EU are wrestling with only with one huge difference - the quarter trillion dollar cost of remediating the Athabasca tailing ponds and the tens of thousands of orphan wells. A big chunk of the Wild Rose province is a massive Love Canal. If the feds and non-oil provinces say 'nyet' to shouldering that cleanup Alberta is screwed.

The inability to access "tidewater" and the environmental time bomb are a one-two punch to any threat of Wexit.

These folks may want a divorce, Mound. But, when the time comes to evaluate their assets, they'll find they're in negative territory.

I haven't read any of the above, but I will after posting this.

Kenney, Moe, Chandler & the secessionists had better be careful unless they once again fracture the right-wing movement to where the CPC will be only one of two voices. Witness Reform, Alliance, CRAP and whatever Harper finally united in 2003-4. I voted for Orchard, for what it's worth.

Anyways, some of the nut-case voices want to erect a physical border just to the west of the Alberta/SK border. With guns - sounds like Trump's wall. Good luck with that.

Harper suggested that Alberta needed a wall, Windsurfer. Kenny is following in his master's footsteps.

Alberta has a wall. Its called the Rocky Mountains. Now if some idiot wants to build a wall, they can move to the U.S.A. Walls are expensive. I know this because I've gotten quotes for a fence around the yard. Its not a big yard either, just one of those 36 x 132 ft. things and its $14K. so if a bunch of Albertans want a wall, they'll have to pay for it because at those prices, I'm just fine with looking at my neighbours. Its a lot cheaper to grow pyrocantha and its just as effective for keeping people out of your yard, province.

Kenney would probably take a page from Donald Trump, e.a.f, and claim that the rest of Canada would pay for the wall.