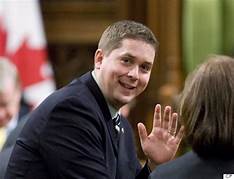 The pollsters are saying that this election is too close to call. But Michael Harris writes that the pollsters have a sullied record of prediction:

I’m here to argue that the pollsters aren’t reading the chessboard very well. There is no way for Scheer and the Conservatives to win this election, if winning means governing. Barring an asteroid hitting the Liberal campaign, the winner of the election will be Trudeau. There is my limb, and now I will climb out on it for the explanation.


Harris goes on to explain why he believes Andrew Scheer and the Conservatives will not be able to govern this country. They simply don't know how to play well with others:

So, here’s why Scheer can’t triumph in this election. Even if the Conservatives were to win the most seats, Scheer will still require a partner in order to govern. And that is the problem. There are no partners, especially in the long term, for the Conservatives.

Scheer will lead Vancouver’s Gay Pride Parade in leopard skin tights before either the Liberals or the NDP agree to sustain a Conservative minority government.

Both Trudeau and Singh have signalled that they are willing to work together, but not with a PM who is a de facto climate-change denier.

Singh has gone even further, declaring that he will not support Scheer under any circumstances because of the “values” abyss between the NDP and the Conservatives.

Reviving moribund pipelines like Northern Gateway, as well as espousing new ones like Energy East, as Scheer has done, means that the Conservatives will still have a lock on the world’s Fossil Award. With Greta Thunberg casting a long shadow over this election, neither the Liberals nor NDP will touch the Conservative climate position with a barge pole.

So who is left to get a potential Scheer minority government through its first Throne Speech?

Although Elizabeth May initially said she would try to work with any party, the Greens would be a dreadful philosophical fit with the Conservatives. Besides, May killed any possible collaboration with the Conservatives when she declared that her party would not support anyone who stood for more pipelines. That would be Scheer.

Even if the Greens were to support the Conservatives in exchange for Scheer committing to a better climate policy, pollsters tell us that the party won’t have enough seats to sustain a government. The current projection for the Greens after Oct. 21 sits at four seats.

That leaves just one political party that will have the numbers to potentially allow a minority Conservative government to survive; the Bloc Québécois. How likely is that?

For the Bloc, there is only one interest to consider, that of Quebec. Scheer has already offered new goodies to Quebec, like his pledge to allow a single form tax return overseen by the provincial government. In order to govern in a minority situation, Scheer might be tempted to offer even more.

From the Bloc’s perspective, even though it is ideologically left on the political spectrum, the party might be able to land a few prize concessions from the Conservatives in return for propping up Scheer. They have nothing to lose in trying.

But from Scheer’s point of view, it would be quicker to down a goblet of hemlock than to embrace Monsieur Blanchet.

How would the West, the Mecca of conservatism in Canada, feel about dishing out more special rights to Quebec?

Any successful political party must have a firm grip on reality The Conservatives have lost their grip.


This election is no nail-biter but it is a stomach-churner. Huge increase in the advance poll turnout. Not enough bones and entrails to sort out what that means.

Curious, ain't it, that 2015 was initially thought to be Mulcair's to lose and so he did to a come from behind Liberal majority. Back then Justin was so bright and shiny that conventional wisdom had him already winning a second majority. Now, between a 'summer help' counter clerk and Mulcair's successor, Jagmeet, it's far from clear that even a minority is possible for Justin.

Like Scheer, Trudeau won't be able to govern in a minority. Joe Clark tried that and was quickly turfed. If the Liberals do survive it'll be a coalition on terms that others will dictate. Electoral reform, here we come.

At least we know what laid low Justin was Justin. Cash for access, First Nations reconciliation, social licence, electoral reform, pipelines, Wilson-Raybould and Philpott, SNC-Lavalin, black face and that awkward groping incident. He rode to power on a legendary name he was never able to grow into.

Even Justin's most ardent fan boys at some point are going to have to accept that he wasn't up for the job. He needed a Keith Davey, a Jim Coutts and other stalwarts such as Alan MacEachen, Mitchell Sharp, Marc Lalonde, John Turner, Chretien, Basford, Pepin etc. Pierre inherited a front bench generously upholstered by Lester Pearson. What did Trudeau get - Gerry Butts, his university buddy.

The Liberals don't seem to be able to attract people of the calibre of the Pearson/Trudeau/Chretien era any more. Dion was a mess. Ignatieff was a catastrophe. Now it's Justin Trudeau. With all the challenges and perils looming large right now this is a terrible time to be consigned to wander in the desert for a spell.

The Pollsters have a dismal track record of late. Poll aggregators - like CBC Poll Tracker and 338Canada.com should at least exclude any internet polls as they are the most unreliable and have no valid margin of error (in spite of the misleading wording on the CBC Poll Tracker website - Grenier should be ashamed.)

Unlike Harris, Mound, I'm making no predictions. But, if there is an upside to this election, perhaps it will be that we'll get proprtional representation and then make it official.

The trouble with polls, UU, is that they get voters to concentrate on the horse race and not the issues.

I agree, Owen. Personally, I would be happy if they banned polling. Or, at least banned it once the writ is dropped.

Harris misses the mark, Owen, because his analysis fails to account for the reality of the Liberal party. Harper's first two mandates showed that the Cons in a minority do have a partner in governance, namely the Libs. That's because the Libs would rather sit out a term or two than cooperate with progressive parties to form a government.

This feature of the Liberal party is why the promise of electoral reform died a sudden death. Electoral reform would have locked out the Cons and given the Libs perpetual power limited by the need to cooperate with other parties. Instead, the Libs opted to retain the FPP system that gives them unfettered power about 70% of the time.

For all their rhetoric, the Libs aren't really a progressive party, and haven't been one since Pearson or perhaps Trudeau, père. This is why they'd sooner see the Cons in power than work with the NDP, Greens or the Bloc.

Internal polling is fine, UU. It supports party strategies. But we, as citizens, should remember what Mark Twain said, "There are lies, damned lies and statistics."

I am not a fan of Mainstreet, but I saw one of their polls yesterday that was interesting . It showed standings regional. The CPC had huge leads in Alberta and the prairies but faired poorly ( two seconds and two thirds, maybe one third and one fourth ) in the rest of the country. Liberals had an 8 to 14% lead in the Maritimes, Quebec, Ontario and BC. The CPC vote may be even less efficient than we think.

This morning on The Current I heard that Liberals are the second choice by most NDP, Bloc and Green voters. A ranked ballot ( if used ) might give the same result as a 38% mayority.

That's interesting, rumley. A ranked ballot is the simplest form of proportional representation. But it might not change things much.

These days the Libs, the NDP and the Greens can claim some common planks in their platforms. The Greens and the NDP have nothing in common with the Conservatives.

All true, Owen and true as well during the Harper years. The Libs are a corporatist party. They are not as extreme as the Cons and that's part of their appeal. The Libs always run on progressive positions championed by other parties. The Libs then fearmonger about the Cons, scream about vote-splitting and badger progressives into voting for them. Once in office, they kill their progressive promises (electoral reform, serious action on climate change) and enact pretty much the same corporate-friendly policies as the Cons would have (buying pipelines, selling military equipment to the Saudis, setting up a bank to support PPP projects, offering deferred prosecutions to corporate criminals, and even enacting a greenwashing carbon pricing scheme first proposed by Harper and approved by CAPP).

The Liberal party's job is to catch and kill progressive policies that would shake the status quo and stop the flow of money upwards.

If the Libs and Cons being the same is conventional wisdom, I have to ask what your definition of “conventional” is. At best, it is a truism of a certain subset of purity pony leftists (notably the far right never seems to make the mistake of claiming that voting for Liberals is just the same as voting Conservative), but it has never really been true, and as you say, Owen, it is very much not the case today. There are fundamental differences between the worldview of the Conservatives and pretty much everyone else.

It's true that the Libs campaign from the left and govern from the right,Cap. It's also true that they steal policies from others. Medicare was Tommy Douglas' idea not Lester Pearson's. But they do bring these ideas into the middle. I expect that Singh's proposal for dentalcare will make it onto the Liberal agenda.

And that's Harris' point, B.J. When it comes to adopting planks from other parties, the post Harper Conservatives give themselves very little wiggle room.