Who Will Be Third? 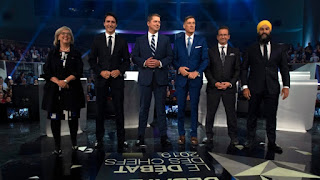 With six leaders on stage — a record in a Canadian federal election — and almost as many moderators, the opportunities to size up the two men most likely to become prime minister as a result of the Oct. 21 vote were, to put it mildly, too few and far between to really set the stage for a decisive match.

Overall, viewers were treated to a cacophony that saw the various leaders spend more time speaking over each other than articulating coherent ideas. Substance was sacrificed to a cumbersome format.

Given the time constraints they were operating under, all six strove for clean clips liable to endure beyond the evening’s broadcast. They all worked hard to make their rivals’ comments unintelligible by interrupting them every step of the way.


Trudeau didn't knock out Scheer and Scheer didn't knock out Trudeau. The real question is which of the four other parties did the best. Cross the People's Party off the list. Maxime Bernier offers few and simple solutions.

Jagmeet Singh did well. His supporters will be pleased. The race is now between Singh's NDP and Elizabeth May's Green Party.

But, as an old Quebecer, I'd keep an eye on Mr. Blanchette. He hit a number of themes last night which will play well with a significant number of Quebecers. Elizabeth May predicted that the final result will be either a Liberal majority or a Liberal minority.

If the result is a minority, the party which holds the balance of power will be absolutely critical.

Email ThisBlogThis!Share to TwitterShare to FacebookShare to Pinterest
Labels: The English Leaders Debate

The debate format was unwatchable. Next time they should have one moderator. The mics should be rigged so only one of them works at a time. Finally, anyone who ignores a question to attack an opponent - like Scheer did with the first question - should have their next opportunity to speak given to the opponent for rebuttal.

Overall I'd say Singh did the best. Whether that'll result in additional NDP support remains to be seen. The loser was Scheer, who came across as a belligerent ass. That may fire up the base, but it won't change any minds. I agree about Blanchette, he did very well holding his own in an English debate.