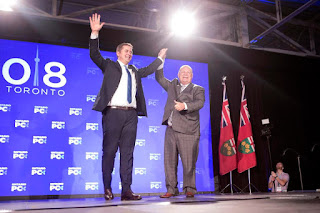 Throughout the election campaign, Justin Trudeau has been linking Andrew Scheer to Doug Ford. Scheer's response has been to keep Ford under wraps. But Trudeau's comparison isn't frivolous. When it comes to policy, Bob Hepburn writes, Ford and Scheer are twins:

First, they both want to kill the federal carbon tax and replace it with incentives, and in some cases fines, for polluters to clean up their dirty emissions. Ford is fighting the carbon tax in the courts and has ordered anti-tax stickers on all gas pumps. Scheer has vowed to repeal the tax and instead invest in more green technology.

Second, they both propose massive reductions in government spending — and all the time trying to insist that cuts worth billions of dollars won’t actually hurt anyone. Scheer plans to cut $18 billion from much-needed infrastructure spending, slash foreign aid by 25 per cent, cancel government help for struggling businesses, freeze government hiring and cut unspecified “nonpersonnel operating expenses.”

In his first months in office, Ford took a similar approach, slashing everything from student aid to child-care funding, legal aid and tree planting.

Third, they both oppose a national pharmacare plan. Scheer believes a better way to ensure Canadians have access to necessary drugs is to plug coverage gap for people without provincial or employer plans. Ford has already killed a provincial plan that provided free prescriptions drugs to young Ontario residents up to the age of 24.

Fourth, they both aren’t keen on raising the minimum wage to $15 an hour. Ford has already cancelled a planned hike in Ontario and Scheer prefers tax breaks for lower-paid workers.

Fifth, they both oppose a national ban on handguns, suggesting a better way to fight gun violence is to get tough on gangs with stiffer jail sentences for convicted criminals in gun-related cases.

Sixth, they both love oil pipelines. Scheer has pledged to revive the Energy East pipeline proposal, which would carry oil from western Canada to eastern Canada. Ford has publicly declared support for pipeline projects, including Energy East.

Seventh, they both want to crack down on irregular border crossers and enforce a more vigilant immigration policy. Scheer wants to hire more border guards, close “legal loopholes” dealing with refugees and focus on suspected organized crime members, although there’s little evidence that’s a problem. Ford has attacked “illegal border crossers,” slashed government funding on legal support for refugees and has suggested Ontario has to “take care of our own” before pushing for immigrants to move there.

At the same time, the ties between the pair go even deeper. For example, both relied heavily on evangelicals and anti-abortion groups in winning their respective leadership races.


Those of us in Ontario know what's on Scheer's menu.

Image: The Toronto Star
Posted by Owen Gray at 7:05 am

.. for the record.. the only person I know of - predicting a majority Liberal win, plus a Scheer implosion.. is The Boss. The sheer stupidity or Kennyson greed of hiring Daisy and Kinsella to roast Bernier et al plus (Confronted with the report, Scheer dodged, saying only that he doesn’t comment on vendors that his party “may or may not have engaged with.”) (The Tyee) may have delivered on her prescience.

Doug Ford looks like and is a jerkwater loser. Sad to say. Kenney a 'smartest guy in the room' wannabe.. he is not. Just a bright, glib ideological carpetbagger, as was Harper. Ford aint no slouch at glib and the fake smile for the cameras.. but the Kinsella Boomerang phenomena has rendered his sucking for Scheer.. ' A Possum In Every Pot' Party platform.. for naught.

Anyone can read the various provincial and federal song and dance of those three.. that is, any average Canadian of lower or medium income.. and readily agree 'this is not what I believe in or want' I note some of the higher ups in the Conservative coven.. coming up all frothy and mean.. ie Ms Lisa Raitt, the incumbent likely to be bounced by Adam van Kouverden.. an Oakville local and Olympic hero. She of course parachuted into Oakville from Cape Breton. What did this noted educator proclaim on seeing approx 12,000 strong overflowing the square at Alberta's Legislative Building ? I paraphrase.. 'Look at all these students missing out on their education to attend a rally funded by the Liberal Party .. oh dear Lisa.. it was that trifling 16 year old Greta.. mid teens, white, who sailed across the ocean just like your forebearers.. or were they on an lcean liner, or flew?

This is what Canadians are filtering or just plain being hammered with.. ideology, political partisanship, deception, deflection, pretension, posturing, social manipulation, live and robocalls, faux evangelism, black ops, data mining, sold out MainMedia, dark money, parachuted into 'safe' ridings candidates.. Our main political parties expertly surf these waves & riptides.. the lesser parties try to get 'in the lineup' to surf.. The Indy candidates are like outcasts in this climate of political animals stalking the provinces, territories and federally.. Its a freak show !

(BTW - apologies.. believe I called you Norm in a previous comment.. think I had the luminous exemplar Norm Farrell from BC in back of mind.. Perhaps I've called him Owen in the past.. senior stuff is my excuse.. If I ever call you Lorne or Mound.. I will know I is truly sloppy.. as is my weak kneed proof reading..)

I have a cousin named Norm, sal. Others have confused us. So you're not the first to give me that moniker. No offence was taken.

I'd sooner have been subjected to Ford. He makes me laugh while Scheer isn't the least bit entertaining and his pathological liar routine pales in comparison to Trump's. Do those guys serve any other purpose? And since Baird and Harper ducked out or fled I find Jason to be the most annoying man in Canadian politics. Thanks, Andrew. The CRAP Party has really let me down on this one. The only laughs I got from them came courtesy of Kinsella.

What I find most depressing, John, is that what these folks are selling is recycled boilerplate. They've learned nothing since the meltdown of 2008.