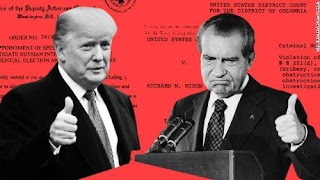 Robert Reich writes that both Richard Nixon and Donald Trump abused the power of the presidency. But there is one big difference between the two men:

It's that Nixon's abuse of power was discovered during his second term, after he was reelected. He was still a dangerous crook, but by that time he had no reason to inflict still more damage on American democracy.


Yesterday's revelations, from both Trump and three congressional committees, make one thing  -- as Nixon used to say -- "perfectly clear." If Trump wins the 2020 election, all bets are off:

As we've learned, Trump uses whatever bargaining leverage he can get, for personal gain. That's the art of the deal.

Who can we count on to protect our election process in 2020?

Certainly not Attorney General William Barr. Trump urged Zelensky to work with Barr to investigate Joe Biden, even telling Zelensky that Barr would follow up with his own phone call.

Barr's Justice Department decided Trump had not acted illegally, and told the acting director of national intelligence to keep the whistle-blower complaint from Congress.

This is the same Attorney General who said Mueller's report cleared the Trump campaign of conspiring with Russia when in fact Mueller had found that the campaign welcomed Russia's help, and that Mueller absolved Trump of obstructing justice when Mueller specifically declined to decide the matter.


The ultimate check is Republican senators. And, at this point, they're in Trump's pocket.

Email ThisBlogThis!Share to TwitterShare to FacebookShare to Pinterest
Labels: Trump And Nixon

And those gentlemen will remain in that pocket until one with less lint in which they'll have to slither comes along.

I fear you're right, John. There are no Republican profiles in courage. There are former Republicans who are courageous. But no present exemplars.