The Vultures Are Circling 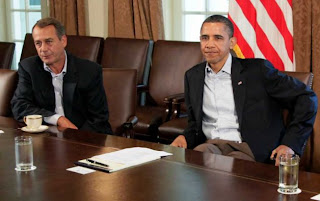 In today's Globe and Mail,  Jeffrey Simpson suggests that Canada should take advantage of American weakness:

In the longer term, the U.S. fiscal mess offers Canada opportunities to improve its comparative position – but only if Canada invests in the minds of its people and its competitive infrastructure.


There is so guarantee that will happen. The newly elected Canadian government has taken its inspiration from the Republican Party, and it advocates policies similar to Boehner's. But Americans should understand that what is happening in Washington is carefully being monitored in government councils around the world  -- more out of self interest than sympathy.

If the traditional advantage the United States has held over most countries is diminished, you can be certain there are plenty of nations which will seize the opportunity to improve their own situations. Simpson writes:

The great advantage the U.S. enjoyed over Canada (and many other countries) in its publicly financed universities, research funding, graduate fellowships and faculty hiring will diminish. The K-12 system, where teachers already are paid much less than their Canadian counterparts, will be further assaulted by cuts.

If Canada were smart, it would realize it needs to invest in the things that will make the country more competitive, while we bring down budget deficits by spending less on things that don’t.


What is presently being played out in Washington is tragic -- and, unlike a Greek drama, the ending has never been inevitable. But the ending could indeed be of Greek proportions.

This entry is cross posted at The Moderate Voice.
Posted by Owen Gray at 8:32 am

What is going on in the US is appalling. What fascinated me the most is how few talk of cutting expenditures on the military industrial complex side of the ledger. It seems the US could close bases overseas and one base in every State (they all have multiple bases) and cut the strength of the military by a very large percentage. The military budget should be cut before the entitlements that meet people's needs. Of course, they need to reinstate the percentage of taxes paid by the wealthy and corporations that were the standard in the 60's. These two things would go a long way to bringing the deficit and debt under control. Unfortunately the ideologues and not the realists are in charge.

...and it advocates policies similar to Boehner's

The Harper government is Canada's Tea Party, ck. They're certainly a far cry from the old Progressive Conservatives.

The search for oil has led the U.S. far afield, Philip, and far astray.

Each barrel of oil is very, very expensive.