Another Mountain To Climb 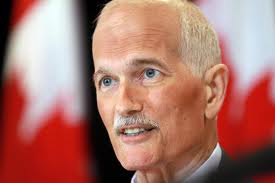 The news that Jack Layton is again  battling cancer is very distressing. On a personal level, it must be a tremendous set back for the man and his wife, who have each previously battled the disease. On a political level, it is also a setback for an  Official Opposition which is just beginning to find its legs.

There is no doubt that the public is on Layton's side. As Adam Radwanski writes in this morning's Globe and Mail,

There is no overestimating the extent to which Mr. Layton’s personal popularity has propelled the NDP’s surge. By far the most charismatic of his generation of federal leaders, he has consistently polled ahead of his party. With each of the four elections under his leadership, the NDP’s image has revolved more and more around his own. And the more Canadians have seen him, the more they’ve liked him – taking the party from 8.5-per-cent national support in the last election under his predecessor to nearly four times that figure earlier this year.


That is why his present circumstances are particularly galling. The man has had enough to deal with lately. But, more importantly -- as Radwanski correctly notes -- Layton has been the "glue" which holds his party together. The NDP is,

a party that could very easily fracture, both between its idealists and its pragmatists, and between its newly dominant (and quasi-nationalist) Quebec wing and everyone else. Mr. Layton is the New Democrats’ glue – partly because New Democrats have to defer to his popularity, and partly because he effortlessly straddles these different groups. But if he’s all that’s holding them together, then sooner or later they’ll fall apart.

Interim leader Nycole Turmel has her work cut out for her.

And Stephen Harper -- as Lawrence Martin has pointed out on more than one occasion -- has had an extraordinary run of good luck. The task  of defining the government now falls to Ms. Turmel and Mr. Rae. It is they who must show that the "Harper Government" has taken on the personality of the man who leads it  -- spendthrift, mean spirited and arrogant.

I am concerned about Ms Turmel as a choice to lead. I mean, for the summer, while the house is not sitting, thus, no Question Period, no key votes, she'll do fine in a pinch.

However, I am not optimistic Jack Layton will be healthy enough to return by the time Parliament resumes come September 19, when there will be Question Period and votes will be coming up. How well will she perform? And can she instill discipline in the party?

I too, would've found it odd that he didn't appoint Mulcair if I didn't know what I know.

But I would've thought that Francoise Boivin would've made a better choice, given that she has parliamentary experience, having been a Liberal MP under Paul Martin.

Something tells me that this new cancer is far more serious than his prostate cancer was. Remember when he announced his prostate cancer in February 2010? He didn't look or sound nearly as sick as he did yesterday. Also, back then, he was forthcoming about the fact that he had prostate cancer. Now, he is keeping mum. Not that he isn't entitled to his privacy, it's just that I find the differences quite telling and something tells me it's more serious. Hence, the reason why I believe he will need more time off to get better.

This news is so sad, but if anyone can beat this awful disease, Layton has what it takes.

Jack Layton looks and sounds very ill. I doubt he will be able to return to parliament in September.

There are lots of talented and skilled NDP parliamentarians I would be very discouraged if they fail to rise to the occasion.

Like you, ck, I wonder if this cancer is more serious than the prostrate cancer.

Jack did not look or sound well yesterday.

As far as the choice of an interim leader is concerned, I think that anyone would have a hard time filling his shoes.

These are not going to be easy times for the NDP.

Jack is a happy warrior, Chris. He's worked very hard to be positive force in Ottawa.

Let's hope that attitude serves him well in his own personal struggle.

These must be trying times for the Laytons and the NDP, Philip.

But they appear to have a talented and diverse caucus. Let's hope they can, indeed, rise to the occasion.

I am sorry to the heart for Jack Layton. I had met him a very long time ago. Jack put his people first then, and still does.

I am sorry to the heart for Olivia as well. She will be Jacks tower of strength.

Jack and Olivia are troopers. They will fight this terrible disease, together.

Absolutely true. If anyone doubts what you say, consider Jack's performance in the last election campaign. We're dealing with two people who will not sit down and withdraw.