Fearing Nothing But Fear 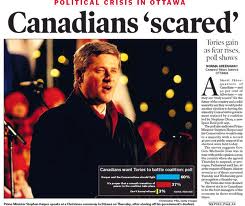 In a short piece for the Canadian International Council, Roland Paris asks the essential question about Prime Minister Harper: What Is Stephen Harper Afraid Of? It's been clear for some time that Harper, for all his bravado, trusts no one. That has been the source of the Nixonian parallels which Bob Rae and several commentators have noted.

But while his paranoia has been on display domestically for some time,  in a recent interview  with Macleans, Harper extended his dyspeptic view of the world to the international arena. Paris writes:

Harper’s world seems to be full of danger and struggle. In response to open-ended questions on foreign policy, he repeatedly came back to these themes. Most interestingly, he offered a Manichean vision of international relations as a struggle between good and bad, and of moral clarity as the greatest asset and most reliable guide to foreign policy.


This is nothing new. George W. Bush was not a man of nuance. Claiming that "you're either with us or against us," he marched his country into two wars -- the results of which are now pretty clear. But Harper goes much farther than Bush and asserts that war is essential to Canada's identity:

War and conflict figure prominently in this story. In the interview, Harper traced a connection between war and the emergence and development of the Canadian nation, arguing that the War of 1812 “essentially began to establish our sense of national identity” and was the “genesis of the geographically wide and culturally diverse nation we have today.” He then explained that Canada has consistently been “on the right side of important conflicts” – including the Second World War and the Cold War – “that have shaped the world and that are largely responsible for moving the world in the overall positive direction in which it is moving.” There is a theory of history encapsulated in this short statement – one that emphasizes, again, the enduring struggle between moral forces, and the transformative and redemptive potential of this struggle. These “big conflicts,” he explained, have been “the real defining moments for the country and for the world.”


There are many Canadians who would argue that the Canadian identity is precisely the opposite of  what Harper is selling. Like a child who is used to getting his way, the Prime Minister wants to remake the country in his own image.

It's all of a piece. For Harper politics is war. What he seeks both domestically and internationally is unconditional surrender. The problem is that Harper is an arm chair general. He has no real experience of war. If he had actually had that experience, he would know that his position and his vision are ludicrous.

Harper has good reason to be afraid: championing asbestos sales to the third world knowing that those sales will inevitably result in sickness and premature death; championing the Alberta tar sands--the most destructive project on the planet and a prime case of ecocide. If he doesn't maintain control in the face of international revulsion, he may see himself before a judge in a criminal court.
It goes without saying that criminals will continue to endanger human life and destroy ecosystems at will unless they are brought to justice using criminal law.
Next June, Heads of State gathering in Rio for Earth Summit 2012 will be asked to endorse Ecocide, the environmental equivalent of genocide, as the 5th International Crime Against Peace alongside Genocide itself, Crimes Against Humanity, Crimes of Aggression and War Crimes.
It's worth noting that ecocide is framed as a crime with absolute liability.Defendants will be judged based on the consequences of their actions, not their intent.
For more information see thisisecocide.com

I'd like to think that Harper believes his achievement is fragile -- that he is leaving a trail of debris which will come back to haunt him.

Perhaps he is aware of the ecological damage he has promoted.

All this assumes, of course, that he has a conscience. If he has one, it is buried beneath lots of ideological baggage.