The Danger Of Getting Too Close To Royalty 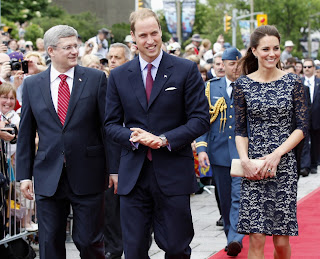 After the Duke and Duchess of Cambridge left Canada to bask in the glow of Hollywood, the Prime Minister chose to do some basking of his own. Speaking in Calgary over the weekend, Stephen Harper, according to The Globe and Mail

consigned the Liberals and Bloc Québécois to history’s waste basket, adding that his majority win on May 2 reflects the fact that Canadians are essentially conservative people.


If Mr. Harper had any understanding of Canadian history, he would demonstrate more prudence in his public utterances. He certainly would not declare that:


It truly is remarkable to hear the Prime Minister spin his victory -- which was won with the support of  24% of the voting population -- into a victory for the ages. But this is a man who, while he is politically shrewd, is not noted for his foresight or wisdom. Remember: there was not going to be a recession; and Canada would win a seat on the Security Council. His latest prediction is that cutting government spending and taxes will create jobs.

Apparently, Mr. Harper believes that at least part of the public's adulation for William and Kate  was also  directed at him. It is dangerous to spend too much time in the company of royalty.