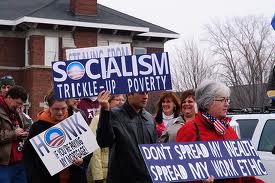 Amid reports that Democratic and Republican leaders have reached a budget deal, Jeffrey Simpson's analysis of  American politics, in today's Globe and Mail, offers some valuable perspective. The reasons for the problem are well known:

The U.S. spends way more than it raises in revenue and, therefore, borrows massively; it imports more than it exports; it has an almost double-digit unemployment rate (9.2 per cent); it has the highest degree of inequality in the Western world; its public pension plan isn’t adequately financed.


Nothing new there. But Simpson's take on the Tea Party is spot on. They are Ronald Reagan's children. Like Reagan, they want to turn back the clock and live in a mythical America:

The radicalization of the Republican Party that has been proceeding apace for three decades reached its apotheosis in the Tea Party, whose view of limited government is infused with a strong sense of betrayal and loss. The Tea Party retreats into a nostalgic view of earlier times (even as far back as the Founding Fathers) when life was simpler, governments smaller, the country unchallenged, and American exceptionalism a source of pride rather than the creator of problems, including flights from reality.

The Tea Party has no coherent answer for anything. It exists to cut government and, as such, reflects a conservative view that the best way to shrink government is to starve it. Eventually, went this line of thinking, the deficit/debt problem would become so intractable that, as long as taxes weren’t raised, the only available option would be to slash spending – which is what’s happening now in Washington and at the state level.


There is no guarantee that the deal will be passed. The Tea Partiers -- and some Democrats -- may scuttle it. There is an even larger argument that the deal goes in exactly the opposite direction from what the United States needs -- more stimulus. But Americans have brought themselves to this moment.

Canada is not immune from Tea Party thinking. Stephen Harper and Rob Ford offer Canadians the same vision. But despite their devout wishes, they cannot turn back the clock.

We await the future.

Actually Owen it's a myth that America's social security isn't adequately funded. It is - if Congress honoured the IOUs they've been writing for decades as they filched working class America's payroll tax contributions that were supposed to be held in trust for their retirement. Congress stole those hundreds of billions to finance artificially low, high-end tax rates and now you have the thieves blaming the public for being greedy and wanting what is quite rightfully theirs. And the Tea Party blames liberals for their misery!

Somebody will have to pay for this deal -- and, because money buys influence, I fear that the rich will not foot much (if any) of the bill.

Obama caved into the radical right. Rather than sacrificing programs that serve the middle and lower class he should have bypassed Congress and raised the ceiling using Article 14 of the constitution.
The myth the right that lower taxes will result in job growth is a version of trickle down economics. It does not work. The right in the US would have us believe that Americans are hard done by by being over taxed is not true. Higher taxes for those that can afford them and reap the greatest benefits from the economy would not make the US less competitive. The Globe and Mail posted a comparative chart that is instructive. http://www.theglobeandmail.com/report-on-business/international-news/us/tax-revenue-as-a-percentage-of-gdp-in-the-developed-world/article2114914/

Thanks for the chart, Philip. Unfortunately, the Right -- in both the United States and Canada -- has an aversion to facts.

When a country takes myth as its prime directive, it's in deep trouble. That kind of trouble spreads like a virus.