The Refrain Is The Same 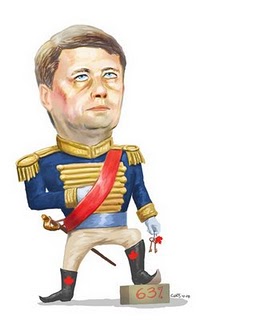 Jeffrey Simpson notes that income inequality in Canada is getting worse. According to a Conference Board of Canada report,

The richest group of Canadians, those in the top fifth of income earners, saw their share of national income rise from 1993 to 2008. Within that fortunate group, the biggest gainers were the super rich, the top 1 per cent. And they got even richer not so much from investments but from basic salaries of the kind paid bank presidents and company CEOs.

From 1980 to 2005, the earnings of the top group rose by 16.4 per cent, while middle-income Canadians’ incomes stagnated, and earnings for those in the bottom group slid.


This song is getting tiresome. But, more than that, the data contradicts the conventional wisdom that tax cuts raise all boats. The truth is that they raise all yachts. They certainly do not spur economic growth. Robert Reich has been swimming against the conventional wisdom for some time. Reducing taxes on the wealthy, he writes, merely  causes the economy to stagnate:

The engine of the United States economy is consumer spending, which accounts for 70% of the overall economic activity.  The middle class simply does not have as much to spend on products, which results in less products and services being sold, which leads businesses to lay off more of the middle class due to lack of demand.  This system creates a cycle as the laid off workers have less to spend leading to even less demand.

And this is nothing new. Reich goes back to the 1920's, which were devoted to the same fiscal priorities:

President Calvin Coolidge slashed taxes on the highest income earners. At the same time he pursued anti-union policies that reduced the bargaining leverage of blue-collar workers, resulting in lower wages for them. The only way most Americans could maintain their slice of the pie was to go deeper into debt. Between 1913 and 1928, the ratio of private credit to the total national economy nearly doubled.

The mounting debt could not be sustained. The collapse began with the Great Crash but continued for a dozen years. Why? When debt financing was no longer available to them, Americans could no longer buy nearly as much of the goods and services they were creating in factories and offices. The immediate result was mass layoffs, leaving Americans with even less money. The longer-term result was continued economic depression.

Despite that history, successive American governments have repeated the same fiscal folly. Stephen Harper is devoted to the same failed economic model. He won election telling us that corporate tax cuts created jobs. The data prove that his claim is simply not true. Worse, the repetition of those failed policies is analogous to the patient in the asylum who claims that -- all facts to the contrary -- he is Napoleon.
Posted by Owen Gray at 8:37 am

Albert Einstein said the definition of insanity is doing the same thing over and over again and expecting a different result and this is what corporate greed is, you know...insanity by Einstein's definition.

You've heard the latest, haven't you? Looks like Obama is going to cave, yet again and probably agree to a short term stop gap measure that will no doubt not include tax hikes to appease those whacky tea-partiers. I only wish there could've been a Democrat primary challenge this time around (they did have one in 1980--Ted Kennedy ran against Carter). Obama has thoroughly disappointed me. He's not going to gain any favours for this. I will guess that we're going to see a Republican in office come 2012, who will, of course, make things a whole lot worse, but hey, so long as the corporations and the wealthiest don't pay taxes, right?

Loved how we heard those fools like Boehner and Cantor refer to tax cuts as "job creators", just like Flaherty did! Do they consult each other? Monkey see, monkey do?

Even funnier, Mitt Romney, like most of the right, proving how mathematically challenged he is. He said that tax cuts increase government revenues???

You know what really drives my blood pressure up, Owen? And I do mean there is not enough aspirin in my house to keep it down at times. Ok, I found it amusing once upon a time, but now it's old. How the word 'socialism' now means anything the right doesn't like. It's been grossly misused.

Funny, though, I read an article recently about Norway, one country that was rated tops for standard of living, comes close to socialism. Very low unemployment. They interviewed a small business owner who does pay high taxes. He says he's happy to pay them. Says he's getting his moneys' worth. Not saying we'll be able to convince anyone here,but if anyone took the time to read that article, they might find that maybe, just maybe it isn't as scary as they thought.

Another thing to note--I don't recall reading anything catastrophic happening to Norway economically since the recession began.

Simpson notes in his column,ck, that Norway and other Nordic countries have the lowest inequality gaps.

Countries like Iceland got into trouble when they bought into the "English model" -- policies advocated by the United States, Britain and Canada.

Einstein got it right.