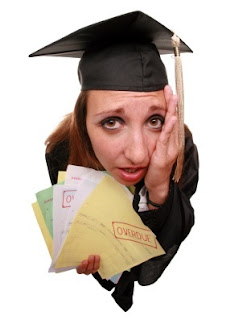 Gary Mason began his column in Thursday's Globe and Mail by reminiscing about the good old days:

Once upon a time, getting money to attend university in Canada was easy. There were non-repayable grants available from the government, and there were lots of good paying summer jobs.


But times have changed. The governments which nurtured the baby boomers now insists that the next generations are going to have to pay their own way, even as the cost of getting a university education skyrockets:

I’d hate to be a student these days. Both the grants and the great summer employment opportunities of yesteryear are a lot harder to get. More parents than ever are being forced to dig into their wallets to help their kids finance an undergraduate degree.


There are plenty of people who bemoan the cost of going to university. But no one mentions the profits that are made from student debt -- and there is a lot of student debt:

The Canadian Federation of Students says the average debt for university graduates is almost $27,000. Canada’s student loan program is close to hitting its $15-billion threshold years in advance. Why? In part, it’s because the cost of getting an advanced education has gone up precipitously. Today, nearly two million Canadians have student loans totalling $20-billion.


Once upon a time, governments saw education as an investment. Now -- like so many other things -- it is a business opportunity for those who have money to invest. The next generation used to be the foundation of a country's future -- and the source of its pension income.

By undermining the affordability of a university education, we have not only put our children's futures in jeopardy. We have also undermined everyone else's future. If there is one characteristic which defines the last forty years, it is our incredibly myopic public policy.

The Canadian Universities PR group had a letter in the Glib n' Stale the same day.

Almost half of undergrads finish with no debt.

90% of graduates get "a job" within six months.

University grads, on average, make twice what people with only a high-school diploma make.

We don't want to educate those we seek to confound. This is a fundamental principle to dismembering the middle class and it has proven highly effective in the United States.

As the father of two sons with post graduate degrees, and a third who begins his undergraduate studies in September, I have anecdotal evidence that those numbers are simply not true.

My sons tell me that there are a lot more young people like them.

I agree, Mound. Having taught both before and after the Common Sense Revolution, I've come to the conclusion that Mr. Harper and Mr. Harris -- and their acolytes -- don't want to teach students how to think.

An example was when Harper instructed his caucus to ignore statistics showing that Canadian crime rates were steadily dropping and go with his gut instinct that simply was untrue. He needed them to set reality aside in order to support his prison fetish.

Another example is in how Harper missed the recession/depression, claiming that no one saw it coming when in fact Krugman, Stiglitz and many others were shouting warnings at the top of their lungs. Krugman even published a book, The Great Unraveling. Again that was uppity knowledge dismissed for contradicting Harper's gut instincts. He only pretends to be a trained economist.

Education and knowledge are to Harper's fundamentalist religious superstitions as the noonday sun is to a vampire.

It made me think of Spencer Tracy's speech in Inherit the Wind -- the play and film about the Scopes trial in Tennessee (and analogously about McCarthyism in the 1950's):

"Can't you understand? That if you take a law like evolution and you make it a crime to teach it in the public schools, tomorrow you can make it a crime to teach it in the private schools? And tomorrow you may make it a crime to read about it. And soon you may ban books and newspapers. And then you may turn Catholic against Protestant, and Protestant against Protestant, and try to foist your own religion upon the mind of man. If you can do one, you can do the other. Because fanaticism and ignorance is forever busy, and needs feeding. And soon, your Honor, with banners flying and with drums beating we'll be marching backward, BACKWARD, through the glorious ages of that Sixteenth Century when bigots burned the man who dared bring enlightenment and intelligence to the human mind!"

That's a great passage, Owen, one every Canadian should read and consider. It speaks so well to the theocratic instincts of Harper and his fundamentalists. Marci McDonald, in her book The Armageddon Factor, chronicles this movement and its quest to shape Canadian democracy to conform to its skewed biblical views.

There are all kinds of fundamentalists, Mound. Mr Harper has them all in his corner.