Lester Pearson Would Be Furious 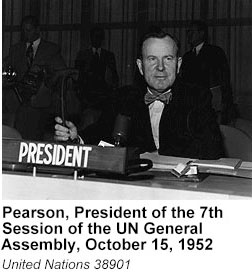 Yesterday, John Baird announced that Canada would boycott the UN Conference on Disarmament. Canada's objection, said Baird, was that North Korea would chair the conference:

"It's just absurd to have them in the chair," Baird told a conference call. "The regime is a major proliferator of nuclear weapons and its noncompliance with its disarmament obligations goes against the fundamental principles of this committee."


When it comes to Conservative foreign policy, Baird's announcement is more of the same. Dominic Leblanc has it right:

"Canada is abdicating its responsibility to act and to be heard on important issues such as nuclear non-proliferation, and is giving more radical countries like North Korea and Iran an even greater influence on the outcome of the negotiations," he said.

"From climate change and the environment to the Rotterdam Convention on hazardous chemicals and pesticides, Canada is systematically failing to wield its influence internationally in order to gain partisan advantage domestically."

One wishes that, like Ebenezer Scrooge, Baird would be visited by the ghost of Lester Pearson. His spirit would be furious. A veteran of The Great War, Pearson knew that it was better to talk to your enemies than to try and obliterate them -- for the simple reason that, while you were pummeling them, they were returning the favour. But that is not the Conservative way. The only way they deal with their opposition is to pummel them.

Despite their triumphalist rhetoric, they  -- and Canada -- will find that stupidity is its own curse.