When Ignorance Drives The Bus 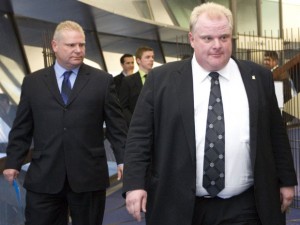 When Margaret Atwood wrote this week that  Rob and Doug Ford's campaign to cut public services was "swiftly approaching the 'let them eat cake stage,'' Doug fired back, "Well good luck to Margaret Atwood. I don’t even know her. If she walked by me, I wouldn’t have a clue who she is.”

He then suggested that, for Atwood's opinions to be taken seriously, she should  "go run in the next election and get democratically elected. And we’d be more than happy to sit down and listen to Margaret Atwood.” In another time and place, the Fords would make for great comedy. They would be Canadian Archie Bunkers. But, because they hold considerable power, they are not funny.

They also appear to be no friends of Toronto's Public Library System , which The Globe and Mail notes, is the busiest library system in North America -- busier than New York City's -- whose population is four times larger than Toronto's. But, the Globe asserts, the value of  libraries should not measured solely by their circulation,

because no public service puts democracy on display more than libraries. Toronto and other cities that have invested in them foster a learning and reading culture. How? By democratizing knowledge. And the value of the system is inseparable from its density.


Doug Ford claims -- erroneously -- that, in his ward, there are more libraries than Tim Horton's. He obviously hasn't been in any of them for a long time. If he had occasionally paid any one of them a visit, he would know who Margaret Atwood is.

The Fords provide yet another vivid illustration of what happens when Ignorance is in the driver's seat.
Posted by Owen Gray at 8:55 am

Email ThisBlogThis!Share to TwitterShare to FacebookShare to Pinterest
Labels: Rob and Doug Ford