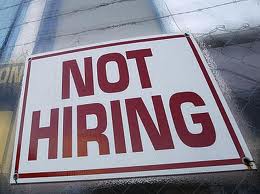 Paul Krugman has a right to be pessimistic. The powerful elites on both sides of the Atlantic suffer from group think. And, instead of proving the truth of the old adage, "great minds think alike," they offer a vivid illustration of the flip side of that coin: fools never differ.

The movers and  shakers are entirely out of touch with the people whose interests they are supposed to serve:

The disappearance of unemployment from elite policy discourse and its replacement by deficit panic has been truly remarkable. It’s not a response to public opinion. In a recent CBS News/New York Times poll, 53 percent of the public named the economy and jobs as the most important problem we face, while only 7 percent named the deficit. Nor is it a response to market pressure. Interest rates on U.S. debt remain near historic lows.


And, more than that, they are stunningly ignorant of history -- which could provide them with some guide posts when attempting to find their way through the present crisis:

For those who know their 1930s history, this is all too familiar. If either of the current debt negotiations fails, we could be about to replay 1931, the global banking collapse that made the Great Depression great. But, if the negotiations succeed, we will be set to replay the great mistake of 1937: the premature turn to fiscal contraction that derailed economic recovery and ensured that the Depression would last until World War II finally provided the boost the economy needed.


When historians review the record of our times, they will surely conclude that our so called "best and brightest" were neither. As Krugman reminds his readers, they will recall another old adage: "You do not know, my son, with how little wisdom the world is governed."

This entry is cross posted at The Moderate Voice.
Posted by Owen Gray at 8:33 am

You can see how their behaviour makes sense to them on a short-term basis, and, to a lesser degree, on a long-term basis.

Short-term, they need to put more money into the pockets of ordinary US-Americans. But in the present circumstances, that will mean money out of their super-profits.

If they can't rig an economic ponzi-scheme to create fake wealth for everyone, they'll simply take what they can get from government bail-outs and home seizures and social security cuts now.

Long-term, more money for workers would mean more domestic job creation, which will, in the long-term, increase the bargaining power of US-American workers, which will be detrimental to the elites' long-term interests.

So, if the whole thing goes down, they'll take what they can in the short-run and hope the collapse hits after they've died.

"We're rich old white men,
And we don't care,
What happens forty years from now,
'Cause we won't be there!
Unh!"

It's an old story, isn't it? Take the money and run.

And they could get away with it -- unless ordinary people, like those in Greece, take to the streets.

If the Arab Spring illustrates anything, it's simply that things can turn on a dime -- and it can all disappear very quickly.