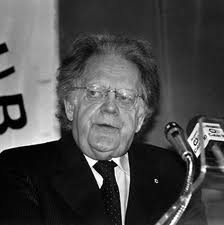 Jim Bronskill reported in ipolics yesterday that the now defunct RCMP Intelligence Service kept a substantial file on the late Northrop Frye. He came to their attention because of "his involvement in the anti-Vietnam War movement, an academic forum on China and efforts to end apartheid in South Africa."

In these days of raging paranoia, it is interesting to note which of Frye's activities made him a potential enemy of the people: his opposition to the Vietnam War and Apartheid, and a trip which predated Nixon's outreach to China.  Bronskill reports that:

The Mounties seemed to first take note of Frye in 1960, when he served as a sponsor of the Toronto Disarmament Committee. In 1963, the RCMP flagged Frye’s participation — along with luminaries including communications theorist Marshall McLuhan and political scientist C.B. Macpherson — in the planned Norwegian quarterly Co-existence.


The benefit of hind sight illustrates how benign Frye's' activities were. But the targeting of Frye should give us pause when we are told that there are all kinds of criminals in our midst. It should provide some context for the Harper government's list of  "30 most wanted suspected war criminals."  The Globe and Mail reports that:

The foreigners are now deemed priority targets to kick out of Canada because they “violated human or international rights” in their homelands, according to the list posted online Thursday. The cases, some of which date back 20 years or more, mostly appear to involve failed refugee claimants who went underground after their bids for asylum failed.


This is a government which insists that unreported crime is a national epidemic -- despite Statistics Canada's recent report detailing the fact that crime rates in Canada are the lowest they've been in forty years. But, as Jeffrey Simpson writes:

These findings don’t matter for the Conservatives. They’re convinced that, for their supporters, the perception exists that crime is rising, or at least is being fought with inadequate measures. Crime is a hot-button issue for the faithful, and one that can be conveniently pushed when the party needs to raise money – because, don’t forget, the other parties are “soft on crime.”


One wonders if Northrope Fyre would be in the government's sights today.