The Saga Of A Prodigal Son 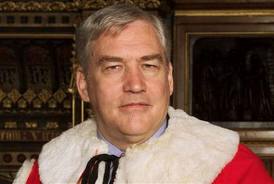 Bob Hepburn argues, in today's  Toronto Star, that Conrad Black should be stripped of his Order of Canada:

Strangely though, the advisory council that oversees the Order of Canada once again failed to strip former newspaper owner Conrad Black, who was originally convicted in the U.S. in 2007 of fraud, of his cherished award.


Hepburn points out that only four people -- Alan Eagelson,  David Ahenakew, T. Sher Singh and Steve Fonyo --  have had the award taken from them. Each ran quite spectacularly afoul of the law -- which is one of the criteria for revoking the award. Hepburn notes that:

Under its own rules, the council “shall consider the termination of a person’s appointment” if the person “has been convicted of a criminal offence” (Black qualifies on this point) or if the person’s conduct “is seen to undermine the credibility, integrity or relevance of the Order” (Black, who gave up his citizenship when he became a member of the British House of Lords, meets this criterion, too).


It seems pretty clear that -- in the interest of justice -- Black should have his Order of Canada revoked. The case for not reinstating his citizenship is more murky. Lawrence Martin, in a recent column, notes that Jean Chretien's decision to revoke his citizenship remains questionable:

He brought back to life the 1919 Nickle resolution, a declaration without legal standing stipulating that Canadians could not receive British titles. Mr. Chrétien’s invocation of it left Conrad Black no choice but to renounce his citizenship to get the appointment. It’s a fact that needs to be remembered when he seeks to reclaim it.


I hold no brief for Black. His troubles are of his own making. Those troubles are the reason he should not be allowed to keep his Order of Canada. On the other hand, he was born here. That fact cannot  be erased -- something the present government needs to remember when Canadians find themselves in difficult circumstances abroad.

At the moment, Black is a man without a country. There is something deliciously ironic in that. But, despite his legal transgressions -- and the fact that they appear to have taught him nothing -- he should be allowed to return to Canada when he has served his time.

It is a longstanding Canadian tradition to grant the return of prodigal sons, even if they are unrepentant.