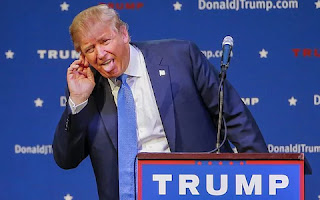 Donald Trump has a chaotic mind. That conclusion is buttressed by everything he says and does. Most recently, that chaos was evident in Trump's statement on international security. Tom Walkom writes:

This particular document appears to reflect the foreign affairs logic of one wing of the Republican Party. But it doesn’t always reflect the stated views of Trump.

Whether it ends up guiding the foreign affairs policy of the U.S. administration remains an open question.

The strategy begins with Trump’s dystopian view of America as a nation that has fallen behind. The reason (and again this is pure Trump) is that feckless U.S. presidents, such as Barack Obama and George W. Bush, allowed other nations to take advantage of Washington.


The main problem with the document is that it does not echo the platform Trump ran on:

The document suggests that Russia and China pose a greater threat to the U.S. than even terrorism. But all are involved in “fundamental contests between those who value human dignity and freedom and those who oppress individuals and enforce unanimity.”

This is language reminiscent of the Cold War. It is also language that Trump does not usually apply to Russia and China.

Indeed, at times Trump has actively praised both Russian President Vladimir Putin and Chinese President Xi Jinping. His beef with China is more economic than political. And while Trump’s ministers routinely decry Russian intentions in Eastern Europe, he himself usually does not.


At bottom, the statement is rooted in the Social Darwinism of the Republican Party. All states are viewed as "competitors:"

In fact, the security strategy says that the dog-eat-dog nature of foreign relations requires America to be willing to confront China and Russia everywhere.


In one sense, this is not at all surprising. Trump views everyone as his enemy. But, in another sense, it is yet again a warning: Trump is completely unreliable. Betting on his reliability is a losing game.

Image: The Telegraph
Posted by Owen Gray at 9:01 am

Email ThisBlogThis!Share to TwitterShare to FacebookShare to Pinterest
Labels: Trump On International Security

Trump is just another puppet. A out of control puppet but the MAN will muddle through. America has troops in 139 countries, I dont think the British Empire had that kind of deployment.

The American era is comming to an end. They are good at buying weapons, not good weapons but at sustaining the Military Industrial Complex. The Chinese are good at business. War is not good business.

When the petrodollar collapses America is left holding worthless paper.

What we're witnessing, Steve, is a national bankruptcy. Bankruptcy is something with which Trump has considerable experience.


Trump's posture needs to be seen in the prism as the result of a man who realizes his approval ratings are lower than any president since records were kept and must therefore play to his unsophisticated base. Why would we expect his words to match reality when that has not been a concern of this man throughout his life? When Trump needs 'facts' he doesn't go to the reality pantry. He simply engineers them - his unsurpassed electoral victory, the size of his inaugural crowd, his unparalleled legislative record over his first year, etc. He tailors the bullshit to his needs of the moment. Thus are the Gullibillies calmed.

Facts are of no importance to Trump, Mound. He keeps defying them. Apparently, he believes he can defy gravity.

.. tRumph is perhaps, at best.. the consummate ugly American - Conniver In Chief. Yes, that is it folks. The man has been so, essentially all of his life.. a conniver. Examine any facet of the cluttered fraudulent history & convince me otherwise. Yes yes.. grifter, liar, womanizer etc etc.. they all are descriptive & accurate.. but now he's way out on the high diving board.. or screetching from the very end of the plank.. with tick tock Robert Mueller somewhere under the surface.. or already on board, the rotted, fetid tRumph 'ship of state' & he can't back up or turn around.. he's just a born to connive aging stupido. Hell, there is not a person on the entire planet who tRumph likes or loves.. or does not see as 'useful' to work his tawdry life along. No he does not love his children or a single one of his wives. No he does not like a single GOP member who is colluding in any of his adventures. No he does not 'like' Putin.. but he is forced to pretend as part of the conniving.

Its always been so.. it always will be till he stops breathing some day.. grinds to a stop.. having f_ucked anyone & everyone who ever crossed his oath in life. Its an astonishing trajectory of course.. and most who practice or embody this disorder end up in prison.. or their lights punched out in a parking lot, or gutted in a court of law. But the Donald is now the conniver in chief - the bizarro tale winds on.. to its eventual final end. A gutless thug who had to practice, preen & polish the act and stagecraft every single day of his life. And just like Canada's former PM Harper.. brilliant at recognizing and grooming those who would support such as asshole

As you note, salamander, most people like Trump wind up in prison or get their lights punched out. We await the denouement.

guys like Trump are legendary for keeping a couple of hundred balls in the air. He has been doing this his whole life, dont expect the result to be different now.

It's a myth that Trump can keep a hundred balls in the air, Steve. His incompetence shows up at every turn.

Owen, whats different now? Any forensic audit of his life would show he was bankrupt financially and morally, but still has a private jet, and billions of dollars worth of property around the world. Newsflash the presidency is the best brand boost ever. He is going to come out of this the richest man in the world.

That's not certain, Steve. He may not complete his first term.