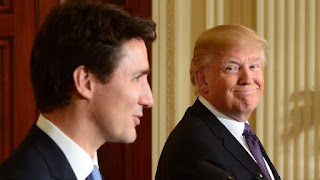 In case you missed it, Trump just tried to turn the UN General Assembly into a congregation of whores. Faced with world-wide opposition to his Jerusalem decision, Trump reverted to Goodfellas rules: If other countries dared to denounce him over a foreign policy decision that shattered the peace process and upended fifty years of global diplomacy (much of it forged by the United States), then their rebuke would come at a price.

The ‘price’ had to do with the fact that Trump seems to believe that since the United States accounts for 22 per cent of the UN’s operating budget, the General Assembly’s votes are, in effect, bought and paid for by Washington.


Donald has always acted like a Don. In his business career, he's dealt with a few. Now he is telling the world he's making it a deal it can't refuse:

Trump laid his contempt for international law, global opinion and the UN on the table for all to see with his Jerusalem call. He warned those nations voting against the rogue U.S. position — a policy that violates both international law and existing UN resolutions — that he’d be taking down names, and not for his Christmas card list.

The payback was swiftly delivered by Trump’s robot at the United Nations, Ambassador Nikki Haley. Fittingly, the news was delivered over the Christmas holidays, shortly after the U.S. was humiliated by a General Assembly vote of 128 to 9 on a motion denouncing the embassy move. Sadly, when the world was expressing its disdain of Trump’s bullying tactics, Canada was hiding under its desk.

The American mission subsequently announced that the UN’s budget would be cut by $285 million, or 5 per cent of the total. The cuts came along with threats of “further action” the U.S. might take, including cuts to foreign aid to certain disobedient countries, and further reductions in American support for the UN’s overall management and operations.


In one year Trump has destroyed his country's bona fides. By keeping his mouth shut, Justin is destroying ours. Silence means consent.

Trudeau showed that he won't stand up to the Orange Bully. I expect the NAFTA negotiations won't go well for Canada.

know your song well before you start singing. This is the problem. The UN has always been a useful instrument for the USA. Trump is just playing it harder.

Why is all the oxygen in the room always consumed by the Arab Israeli conflict? If there was a real UN this problem would have been solved by the will of the world.

When we are dealing with a total moron who holds a great deal of influence over our collective future then perhaps silence is the best (possibly the only) response by Canada. Which is not to say that my own personal response to Trumph would not be suitable for publication Owen

And Trudeau's debasement of Canadian principles was exacerbated, Owen, by his gormless acceptance of the Nikki Haley thank-you party to which only the obsequious were invited.

If you don't play the game by Trump's rules, Cap, he grabs the ball and goes home.

It's not easy to solve problems that have one thousand years of history behind them, Steve.

I understand your point, Rural. On the other hand, fools can create all kinds of problems for people other than themselves.

A simple, "No, thank you" would have been the appropriate response to the invitation, Lorne.

Fine, let him do that. The government's own analysis shows that walking away from NAFTA is a viable option. As the most sued country under the investor-state provisions, we would certainly save a bunch of dough in legal fees and penalties, and be able to set an independent environmental policy.

The word is that the people who would be hurt the most would be voters in Trump states, Cap. But I doubt that analysis has penetrated Trump's skull. Grass doesn't grow through concrete.

While I enjoy Michael Harris' columns and usually agree with him, I believe he is wrong this time.

Canada has always voted with the US on the "Israeli question" at the UN. Canada was once again going to vote with the US until they threatened to "take names". Canada's abstention on this vote is a slap in the face for Trump.

In this case I'd rather see Canada try to be peacemaker than get involved in the current pissing match.


Most of us have at some time had a neighbour that we cannot bide. Usually we keep our distance whenever possible. Canadian leaders have had some rough times with their American counterparts. Diefenbaker didn't get along with Kennedy. PET was a thorn in Nixon's side. Obama was no fan of Harper. Now we have Junior and Trump. While Trudeau seemed to make a good, first impression it wasn't long before Trump started looking for his weaknesses, something he could exploit for the approval of the Gullibillies.

Like UU4077 I would like to see Canada reclaim its 'honest broker' reputation of decades past but that entails trust hard earned that we squandered along the way. Our support for the Saudi bombing campaign on Yemen, our sale of democracy-suppression 'death wagons' and our wholly one-sided voting in the General Assembly on matters of Israel and Palestine reveal we're an American dominated branch plant.

That's unfortunate, Mound. LBJ tried to bully Lester Pearson. The story goes that he tried to pick him up by his lapels. But Pearson's acceptance of draft dodgers sent the right message.

When I read the title I thought this was going to be about #Metoo, I was like this dude is going to be mobbed by angry feminists, but its about Trudeau. I do agree Trudeau shows a sad unwillingness to stand up to Trump that Jagmeet Singh can use against him.

I don't believe in abstention. I don't understand how people feel that speculation should be made about a non vote. We in this country have spent the last twenty years being forced to vote for incompetence through fear of losing our say in the political arena. A non vote has always been seen as a non point of view, apathy and being denied the right to criticise. An abstention to me speaks of only one thing, cowardice. But then, I speculate. The "apprentice" should be fired, but after the "Friends of America "party.

Trudeau Junior is not an intellectual heavy weight by any stretch and seems more intuitive in his perceptions of what's right or wrong. Butler and his other advisors have done pretty well on most fronts in making Justin happen but his foreign affairs dexterity is lacking and it's hard to pinpoint whose agenda he is following. I always found the appointment of Chrystia Freeland as Global/Foreign Affairs Minister concerning. She is cut of the Michael Ignatieff cloth of improving the plight of human kind through military and economic intervention. Toxic stances on the Ukraine, Saudi Arabia and Venezuela started by Harper continue. I guess the saving grace is that there is a bit more nuance when it comes to Israel and Palestine.

Mostly, I dropped by to say hello and to wish you all the best for the New Year, Owen.

My hunch, Gyor, is that the ride is going to get rougher for Justin in the new Year.

I think there are legitimate reasons for an abstention, zoombats. But, because Trump sees all of life as a zero sum game, it means nothing to him.

I haven't heard from you in awhile, Bejing. It's good to see your comment. Happy New Year. It should be an interesting one.

What worries me, UU4077, is the suspicion that Trump will take Trudeau's silence as approval. We don't have to yell. But Trump should know that Canada is no pushover.