The Assault On Mueller 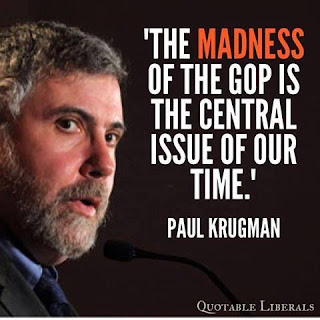 Critics on the right charge that Mueller’s investigation is politically biased or worse. Some of the attacks are particularly vitriolic. Sean Hannity has called Mueller a “disgrace to the American justice system” and said his investigation is “corrupt” and abusive. Newt Gingrich, who effusively praised Mueller when he was appointed, now says Mueller’s probe is corrupt, dishonest and a “partisan hit.”


As Mueller closes in on Trump the Republicans are trying to deligitimatize Mueller -- who by all accounts is one of them. They do not understand -- or care -- how prosecuters work:

Such criticisms betray a profound misunderstanding of the way professional prosecutors and FBI agents do their jobs. Prosecutors and agents are human. They are allowed to have political views, belong to political parties and support political candidates. It is not a conflict of interest if a prosecutor who belongs to one political party is involved in an investigation of a politician from another party. We’ve never had a system where Republicans could be investigated only by partisan Republicans or vice versa.

We live in a hypercharged environment, where almost every move is seen through a partisan political lens. Many people don’t believe that a prosecutor such as Mueller could simply follow the facts and the law. But that’s exactly what happens. Prosecutors and agents set aside their personal politics when they work on investigations, and it’s essential that they do so. In this country, we don’t use criminal prosecutions to attack political enemies. That’s the stuff of despots and dictators, not the American justice system. For good prosecutors and agents, this principle is part of their DNA.


If the Republicans win this battle, the United States is doomed.

Owen facts are facts. Do you remember Ken Starr? How is Muller different. It seems very probable the Clintons were as sleazy as Trump and the FBI seems to be playing part of keeping them clean.

The central attack on Trump is the Russian collusion. Muller was appointed based upon the very tainted Russian Dossier. 18 months of gloves off investigation has yielded zero proof of any collusion.

Dont get me wrong, I think Trump is dirty, but he did not work with the Russians to defeat
Hillary.

Owen I think Krugman is very very clever. However he seems to have sold his soul. He is just as partisan as anyone know. He defends Hillary and Bill. He defends a witchhunt based upon a false premise. Hey it got Al Capone and if Trump dies in jail from sipholus, I will not be sad.

We can not move forward until the partisan facts are discounted.

Its called positioning. It replaces truth. We should ban it.
Like in hockey a hit to the knee or the head. If you postion
something, there should be a penalty.

Everything is history to what happens today. What we need is to learn from that and prevent more disasters tomorrow.

Right now in the world of the future where lost. Blade Runner was set in 2019, 2001 a space odyssey is beyond the current dreams of NASA. So where the prophets wrong, or did society take a Chinese detour. The Chinese had a society that stagnated for 6000 years.

Upon the assassination of JFK we stopped moving forward. The Deep state moved in and consolidated the past to profit forever in the future.

Things went well until the blow back of Watergate. Am I the only one who believes that Bob Woodward could be a asset. Some people think the Watergate break-in was performed by the same team that worked Dallas. The purpose being to keep a lid on Nixon.

Then Jimmy Carter was virtually assassinated in Iran. The people who controlled the oil
gave him trouble big time. His attempt at rescue died in a mysterious dessert. The savior of the American people Ronald Reagan watched the hostages go free milliseconds after he
was President. Then you go on to Iran Contra, and containers full of weapons for Iran. We are all supposed to believe none of this happened.

This team moves forward and GHWB becomes a President who
is amazed at bar codes. For this flaw Clinton becomes President
who passes the anti welfare laws
and through proxy wages
war on Russian
in the former
Yugolsalia
the Albanian mafia
becomes our
best friend

Do not want to
go all deep into
conspiracy theory
but jet fuel burning
does not melt steel
Steel melts at 1200
degrees.
If you want to make
steel you need coal
to hit those temp
with applied oxygen
there is no scientific
explanation of how the
two towers fell
let alone building
seven

Our current American Idol process ensures incompetent leaders. Once again we have to open things up through electrolytic reform to achieve governance by the people.

It's way too early to reach that conclusion, Steve.

On the contrary, Steve. Mueller's record speaks for itself. You've bought the con.

This is getting tiresome, Steve. One well thought out comment is enough.


It's annoying when this character makes statements such as Mueller's investigation has yielded "zero proof" of any collusion. How does this guy or the others like him know what Mueller's team has uncovered? I doubt that any member of Mueller's team calls Steve to discuss the progress of their work or solicit his opinion.

The good part is that Steve seems to have found a home on your blog, Owen. You're taking one for the team there and thank you for your service.

.. at this point, the collective 'we' aka 'the general public' do not know what Robert Miller has. Meanwhile, the Trump 'circus' staggers on unabated. Its become quite absurd & hardly needs reiteration or detailing. The only way one can really get a grip on it, may be to start thinking in the terms or language Hunter S Thompson utilized.. Fear & Loathing

Steve is one of Trump's folks, Mound. And he provides amply evidence of how they process information and why they hang on so tenaciously.

Trump's supporters are real. And, unfortunately, salamander, they'll still be here after Trump has gone.