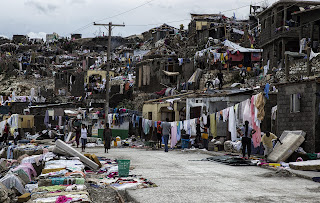 I admire Hugh Segal. He has always had the courage to speak truth to power. In this morning's Globe and Mail he advocates welcoming the many Haitians who are presently fleeing the United States:

There are commitments that involve more or less risk, and more or less genuine impact. Often, when a country acts clearly and decisively in a way that underlines its own values, that is when its impact is greatest. There would be no greater practical example of Canadian engagement as a member of the United Nations, a member of the Organization of American States and a founding member of la Francophonie, than a decision now to reach out and welcome Haitians who face deportation by the United States.


The commitment to help Haitians is nothing new to Canada. And Haitians have been contributing to this country for a long time:

We have a robust, active, productive, economically and culturally dynamic Haitian community in Quebec, and elsewhere. A distinguished Canadian of Haitian birth, Michaëlle Jean, became our Governor-General and now heads la Francophonie in Paris. The Haitian community is a credit to Canada in so many ways and has produced business, cultural, political and journalistic leadership that has immensely strengthened and enriched us all. It has the depth and capacity to sponsor and welcome new arrivals, along with other Canadians who would be delighted to help.


Nearly forty years ago -- when Baby Doc Duvalier ruled the roost --  my wife and I visited Haiti. At that time, it was the poorest country in the Western Hemisphere. The average annual income was a little over $500 a year. That position has not changed. In fact, it is worse after the ravages of this year's hurricanes.

Segal is right. We should welcome people we have long welcomed -- particularly now that the president of the United States claims that "they all have AIDS."

Image: Los Angeles Times
Posted by Owen Gray at 9:20 am

Things have changed. We should be looking at our country as a lifeboat. If we want more displaced persons we have to be engineered to take more passengers without capsizing the boat.

Right now we have a housing crisis. Until this is solved why would we bring more people to live here?

We always have problems to be solved, Steve. But we have the capacity to make room for these people.

I know its not popular but nation building IMHO is a better way. I propose we put our efforts into goverment in a box. This is a software package just like any ERP the leading companies used but designed for goverment. In the case of Hati being self sufficient in food is a easy task. For other places including our first nations, container food is the way forward. Third container housing with solar panels, composting toilets and rain collection.

If you could see Haiti's blighted landscape, Steve, you would realize that being self sufficient in food is not an easy task. We have capaccity for your children. The problem is we have governments that don't want to invest in them. Take a look at yesterday's post.


With trepidation I must agree in part with Steve. We are embarking on what will be a century of unprecedented change and challenges. I understand Hugh Segal's compassion but it's a narrow, emotional argument. He singles out one people, Hatians, as distinct from and more deserving than others, deserving of discrimination. What people, then, are second most deserving. Who is third, fourth? What should we do to/for them?

Within a decade a phenomenon called "climate departure" is predicted to set in. That is an abrupt change in local climate whereupon every year, without exception, will be hotter than the hottest year pre-departure. Among the places expected to be first hit are parts of the Caribbean and also Central America. These are areas already reeling from climate change. We're warned that climate departure could render some of these areas uninhabitable for permanent residence. It may also kill off agricultural and tourism industries. In other words we're looking at region-wide mass migration. The United States is already looking at using Mexico as a migration "moat" with the US/Mexico border serving as a second line, drawbridge.

What will be our humanitarian imperatives should this sort of mass migration happen? We need a major conversation on these issues, now. The longer we put it off, the more poorly we'll be prepared and the more likely we'll be left with some particularly violent response. There are few good options but an abundance of progressively more horrible choices.

I agree we need the conversation, Mound, and we need it now. Our world is not dealing very well with the migration of peoples fleeing disaster. We have always put up barriers. And, when we did, we were driven by fear, not courage. I think of my Irish forebears fleeing starvation. I would not be here if they had been barred from this country.

What is it about those "temporary" visas that the Haitians don't understand?

Aside from that, accepting them in Canada might be a way to gently slap Trump and his goons.

Yes, immigration is an issue that needs to be looked at seriously. Canada may look like a lot of empty space but most of it is claimed in one way or another. A century ago the Northwest Mounted rounded up the First Peoples and put them on reservations and colluded with those who killed off the buffalo. We don't do that anymore, at least I hope we don't. Our cities need complete re-engineering; at the present they are over crowded. There is opportunity here but it is fraught with problems.

A good point, Toby. There is opportunity here. But, if we don't think things through, we could create a bigger problem.

At the risk of being totally off the wall to many, I submit man-made climate change is a thesis alleged to have proof which cannot exist - unless you know how to take snapshots of temperatures in the future. Which is not to say climate change does not exist. It certainly does, and its drivers can be a good deal more erratic and unpredictable even than IPCC policy statements to governments to drive energy taxation which the UN would administer, to the tune of trillions annually.
If you wish to insist man controls weather, do you believe in geoengineering as well?
Haiti is another raped slave colony. Anyone who knows the real story of Canadian activities in Honduras would be cautious about more Caribbean involvement.
It sounds heartless, but foreign 'aid' initiatives have a bad habit of being springboards for surreptitious activities further undermining local ability to deal with their problems. Nothing else could explain decades of US military shipments to Israel and U.S. pushing for right-wing leadership in the Knesset, something rife under GW Bush.
Give it a minute. I'm sure the CIA has their own leadership plans in play. Hit 'em while they're down.

You can bet, opit, that the Lords of Profit have hatched plans to make money from the Haitian disaster -- and every other disaster on the planet. That's why a little compassion is in order.

Rural Canadian at https://ruralcanadian.blogspot.ca/2017/12/the-canadian-lifeboat.html has written a blogpost in response. I encourage readers to have a look at it.