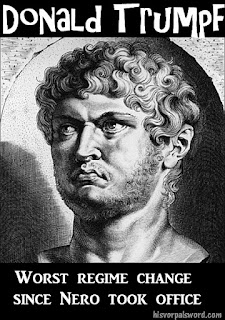 Hart Williams writes that the Republican tax bill -- which is speeding its way toward passage -- marks the end of democracy in the United States:

Think about it: a bill that will affect EVERY SECTOR of the American economy is put together in secret in the House and the Senate. Both bills pass, using legislative tricks like ‘budget reconciliation’ to sidestep normal process, holds no hearings, allows no input from or information TO the opposition party, engages in backdoor trading, all-but-bribery and all-but-extortion in secret, then passes both versions and “reconciles” the final bill again in secret, again behind closed doors in formerly smoke-filled rooms, as every single Republican senator is carrot-and-sticked into voting for the final bill, which was only released on Friday in the afternoon.

The tax bill itself is almost entirely a separate subject, and its particulars ought not be adjudicated here, but we need to understand that a fundamental principle of our form of governance, already on life support, has died.

A majority of Americans are opposed to it, but that matters little to the GOPs of today — or should I say “toady”?

83 percent were opposed to striking down Net Neutrality, but the chairman of the FCC, a “free market” GOP does not extend that freedom to the franchise. Ayn Rand, you know. The virtue of selfishness, or as the Republicans actually behave: we expect greed (the most toxic of human drives) to miraculously solve all human problems.


What we've witnessed is a coup. The wealthy have captured the legislature, the courts and the presidency.

Democracy in the United States is dead.

Image: The Moderate Voice
Posted by Owen Gray at 11:21 am

Email ThisBlogThis!Share to TwitterShare to FacebookShare to Pinterest
Labels: The End Of American Democrqcy

True True True. The biggest problem in the fair mind in the world is the gap between the top and the bottom. The top could give half and then their might be some kind of equilibrium. Its the one law of economics I appreciate. Law of diminishing returns, after your first billion
what is left to enjoy?

We know how this ends like the Bastille or Cuba. Share a little and make most people happy and you can live forever without protection in you skyscrapers in the sky

The problem democracy faces is the global billionares joing forces to keep the empire. I do not need to tell you the Chinese empire lasted 6000 years by the simple cutting off of genitals.

In the 21st century, something tells me this new regime won't last 6000 years, Steve. But it's end could be particularly bloody.

Because the Soviet Union fell, Owen, those who espouse unfettered, depradatory capitalism believed that the final 'enemy,' a competing system, had been defeated. One thing missing from their assessment is the domestic population. At some moment, a breaking point will have been reached.One hopes that point is fast approaching, for the sake of democracy.

Those who saw the Soviet Union as the enemy forgot the conditions which gave birth to the Russian Revolution, Lorne.


I don't think the tax bill does more than provide powerful confirmation of the ascendancy of plutocracy over democracy in the United States. The ouster of democracy happened gradually over the course of a few decades. It was the product of incrementalism, the same governance policy so popular with our own Harper.

The death of American democracy has been eulogized by the likes of Henry Giroux, Chris Hedges, Gar Alperovitz, Joe Stiglitz, Robert Reich, James Galbraith, Noam Chomsky, Lewis Lapham, the late Chalmers Johnson and Howard Zinn and many others going back certainly more than a couple of decades.

The corporate colonization of the American state was manifest in the creation of ALEC, the American Legislative Exchange Council where "bought and paid for" legislators would dutifully turn up to receive their "marching orders" in the form of ready to go draft bills their corporate benefactors wanted introduced and passed. Thus were special or narrow interests able to interject themselves between legislators and the public who placed them in office.

Government of the people, by the people, for the people is extinct. Will we go the same way? Can we be confident we won't?

I read Andrew Coyne's recent editorial in which he argued that, no matter the flaws in the Republican tax plan, it was imperative that Ottawa follow suit lest we lose some competitive edge to the Americans. The morality and malignancy of the American tax reform was of no consequence to Coyne. He ignored it entirely. That it would inevitably, eventually import the same outcomes in Canada was of no moment.

I'm not sure that Canada isn't drifting into some 21st century version of a caste system. Our revenue agency plays footsie with the big accounting houses who have swayed if not corrupted the agency. Trudeau goes easy of the Trudeau/Morneau class when they're exposed as tax cheats. In Canada, Quality People have little to fear in our governments. All of which suggests we are well on our way to democratic decline.

Given our habit of lagging behind the United States by about a decade, Mound, our future doesn't look bright.