The Marriage Of Godzilla And Frankenstein 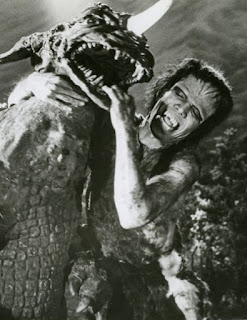 Politicians have lied since the beginning of recorded history. But, Chris Hedges writes, we are living in a time when lying has become permanent:

Donald Trump and today’s Republican Party represent the last stage in the emergence of corporate totalitarianism. Pillage and oppression are justified by the permanent lie. The permanent lie is different from the falsehoods and half-truths uttered by politicians such as Bill Clinton, George W. Bush and Barack Obama. The common political lie these politicians employed was not designed to cancel out reality. It was a form of manipulation. Clinton, when he signed into law the North American Free Trade Agreement, promised “NAFTA means jobs, American jobs and good-paying American jobs.” George W. Bush justified the invasion of Iraq because Saddam Hussein supposedly possessed weapons of mass destruction. But Clinton did not continue to pretend that NAFTA was beneficial to the working class when reality proved otherwise. Bush did not pretend that Iraq had weapons of mass destruction once none were found.

The permanent lie is not circumscribed by reality. It is perpetuated even in the face of overwhelming evidence that discredits it. It is irrational. Those who speak in the language of truth and fact are attacked as liars, traitors and purveyors of “fake news.” They are banished from the public sphere once totalitarian elites accrue sufficient power, a power now granted to them with the revoking of net neutrality. The iron refusal by those who engage in the permanent lie to acknowledge reality, no matter how transparent reality becomes, creates a collective psychosis.


That collective psychosis makes everything and everyone perfectly absurd:

The permanent lie turns political discourse into absurdist theater. Donald Trump, who lies about the size of his inauguration crowd despite photographic evidence, insists that in regard to his personal finances he is “going to get killed” by a tax bill that actually will save him and his heirs over $1 billion. Treasury Secretary Steven Mnuchin claims he has a report that proves that the tax cuts will pay for themselves and will not increase the deficit—only there never was a report. Sen. John Cornyn assures us, countering all factual evidence, that “this is not a bill that is designed primarily to benefit the wealthy and the large businesses.”


Truth no longer matters. What matters is what is "correct:"

Federal courts are being stacked with imbecilic and incompetent judges who serve the “correct” ideology of corporatism and the rigid social mores of the Christian right. They hold reality, including science and the rule of law, in contempt. They seek to banish those who live in a reality-based world defined by intellectual and moral autonomy. Totalitarian rule always elevates the brutal and the stupid. These reigning idiots have no genuine political philosophy or goals. They use clichés and slogans, most of which are absurd and contradictory, to justify their greed and lust for power. This is as true on the Christian right, which is filling the ideological vacuum of the Trump administration, as it is for the corporatists that preach neoliberalism and globalization. The merger of the corporatists with the Christian right is the marrying of Godzilla to Frankenstein.


When Godzilla marries Frankenstein, both stomp around, destroying everything in their paths.

Email ThisBlogThis!Share to TwitterShare to FacebookShare to Pinterest
Labels: The Permanent Lie


Many years ago I read a fascinating history of the decline and fall of the British Empire. While many see this as the independence movements of the immediate postwar era the process actually had been underway for nearly a century by that point. It was a time that witnessed a variety of bizarre movements, religious, military and political, that bear at least some familiarity to what is underway in America in the 21st century.

America is in decline. It isn't just a matter of ascendant rivals such as China. The American nation is beginning to fail. It's abject refusal to prepare for the impacts of climate change that, in the early onset stage, are already battering America is one example of the mortal hubris of the state and its people. It's refusal to respond vigorously or at all to rapidly worsening inequality is another. The emergence of a true, permanent warfare state and the embrace of violence or the threat of violence in lieu of diplomacy as America's principal instrument of foreign policy yet another. In the runup to the tax bill even prominent Republicans such as senator Lyndsey Graham were openly admitting that the legislation was for the benefit of the "donor class" and without it the elected minions would receive no further contributions. He and others said that openly.

That's a nation staggering along with one collapsed lung and minimal function in the other. Any major shock of the sort that demands high levels of social cohesion may be enough to bring it down. All it would take is a loss of confidence in the US dollar and a switch to a new reserve currency or basket of currencies. Forced to borrow and pay its debts in a currency it cannot control and manipulate, i.e. 'quantitative easing', America's economy, now heavily financialized and, hence, susceptible to weakening of investor/lender confidence, could be hollowed out almost overnight.

The world has already seen a financial collapse engineered by American "genius," Mound. The latest tax bill suggests that the nation is headed for another. That could be the straw that breaks the camel's back.

it would take is a loss of confidence in the US dollar and a switch to a new reserve currency or basket of currencies. Forced to borrow and pay its debts in a currency it cannot control and manipulate,

Hence the invasion of Iraq and Libya, two countries wishing to dump the US Dollar in favour of other monies.

The fall of the dollar will be a violent one.


Perhaps my New Year Resolution should be to proofread before posting. Yes, this tax bill probably undermines the economy especially as the 1.5 trillion dollars in benefits it doles out, about 80% to the top 1%, represents lost revenue the federal government will have to make up by borrowings.

Congress could offset the expense with programme cuts but the irony is that cuts to services and benefits would hit Trump states the hardest because they're the poorest and most unequal. That's why McConnell has already said they probably won't be getting rid of Obamacare anytime soon.

This swamp is not getting drained. It's the only thing keeping the Republican dingy afloat.

I suspect, TB, that no one in the Trump Administration has considered that contingency.

These folks are giddily headed for the abyss, Mound.

I’m a proud British Columbian, but not so much about the absurdism the BC Liberal government — ousted in May after 16 years in power — had perfected long before The Donald adopted it.

Sparing y’all the full list of examples (there are many), I’ll cite just a few:

- when the tailings pond burst at the Mount Polley mine, spewing billions of litres of mine-sludge into Quesnel Lake, then Minister of Mines Bill Bennet (the Kootenay MLA, not the former Premier) stood astride the scoured creek bed just below the breach, hands on his hips, declaring, “There’s nothing wrong here!” In fact it was one of the worst mining disasters in BC history, little-reported by the bought-and-paid-for mainstream news-media, and was caused by officially ignoring engineering specs so the company could build the pond and its profits higher. Premier Christy Clark (now ex-Premier and ex-MLA) performed a similar photo-op by declaring that she “stood shoulder to shoulder with her Aboriginal sisters...” Her so-called “sisters” were actually there protesting the negligent permit process that favoured the mine’s profitability while ruining the creek, the lake and downstream waters that flow into the mighty Fraser River.

Now, that was absurd.

Christy really deserves recognition for her astounding absurdity — in fact absurdity squared: She won her first mandate of her own — but not her own riding; she had to by-election parachute into the safest BC Liberal riding in the province to get herself a seat in the Assembly — by campaigning on the singularly absurd Liquified Natural Gas industry, absurd because, as she topped one whopper after another and went from millions-to-billions-to-trillions of promised dollars, enough to wipe out the prodigious debt her government had racked-up, there was as yet no LNG industry at all. (She actually won that election for her party because the NDP ran such a lame campaign.)

During the next fixed-term the promised bonanza evaporated as world LNG prices collapsed for the foreseeable future and investors eager to help Christy win began to bail out; by the time the next election rolled around (the one in May the BC Liberals lost, and saw her leave politics altogether), the only “investor” left was the corrupt Malaysian state oil company — which subsequently bailed out itself, too.

But what compounded Christy’s LNG whoppers of the previous campaign was her centrepiece Site-C dam on the mighty Peace River, the most expensive election campaign stage-prop ever, but get this: she insisted it was needed to power the LNG industry that she’d promised in so many whoppers four years previously, and had gone completely down the tubes by this time.

You can’t get more absurd than that.

As it turned out, the new NDP government has decided the province is too-far committed financially to terminate it.

Okay, maybe you can top the BC Liberal absurdity. Nobody does it like BC politicians.

I have been reading Anthony Beevor's "The Fall of Berlin" and the resemblance to the present state of disarray and crumbling of other regimes is quite startling. the fall of the Nationalists in Germany and their propagandists outright lies to their wasted population could be compared to the decline of other present day empires I suppose. While others may seem to regard this comparison as a bit of a stretch, I don't think the Nazi party held the distinction of lies and deceit only to themselves. History does in fact repeat itself time and again.

That is the supreme irony of the Trump regime, zoombats. He promises to "make America great again." The truth is that he is hastening that nation's decline.

In reality the top rate for working one percent is now 29%. For the hedge fund masters of the universe it remains a pleasant an unaccoutable 15%

The rich are getting richer, Steve.