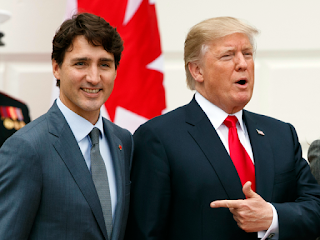 Issuing timorous platitudes in response to Donald Trump’s disastrous decision to move the U.S. embassy from Tel Aviv to Jerusalem is not leadership. It’s abdication.

Everyone understands the need for expediency, diplomacy and practicality in geopolitics. No government sticks its nose into another country’s affairs on a whim.

But for his government to offer nothing more on Trump’s catastrophic political decision than a promise that our embassy is staying put — along with an anodyne statement that the Israelis and Palestinians are our friends — is decaffeinated politics at best and, at worst, a disgraceful cop-out.


It's not easy living next door to the United States. But Donald Trump is not a normal American president. And sometimes neighbours have to deliver unpleasant truths to those who live across the yard:

President Trump reversed seventy years of U.S. foreign policy after consulting his belly-button and Steve Bannon. According to CNN, American evangelicals were informed of this reckless and self-interested political move before the State Department.

In the end, Trudeau will gain nothing by molifying Trump. The shear number of people who have left his employ during the last year should make that clear. And those who stay on  -- like Jeff Sessions and Rex Tillerson -- merely serve as punching bags fro Trump. In the end, Trump must be confronted -- certainly not a pleasant experience.


Justin needs to remember his father's response when the Watergate tapes revealed that Richard Nixon had called him a "son of a bitch." The elder Trudeau's response was, "I've been called worse things by better men."

Worse things await Justin the longer he remains silent about a man who most assuredly deserves the qualifier "worse."

Image: The National Post
Posted by Owen Gray at 10:20 am

Email ThisBlogThis!Share to TwitterShare to FacebookShare to Pinterest
Labels: Trudeau On Trump

I am down with Jews in Jerusalem.

I know that the founding fathers of Israel did some nasty terrorism of their own to create their own state. I suspect even in recent history Israel has taken out Canadian peacekeepers to make sure the world did not see what they did. Canadian dead bodies join American dead bodies to build a Jewish enclave in the hostile middle east.

The Palestinians where offered a golden parachute and they declined. Decisions have consequences and they made a bad one.

Lets not forget we are talking about people who are either Hezbollah or ISIS. Two sides of a coin you do not want in either pocket.

If Israel declares its borders its a done deal. We have seen what concrete can do in Ireland.

Every American president since Clinton has promised what Trump did. They all chickened out
at the outcome. The guy with no filter says KFC in the middle east.

There is a firestorm going on down south. The people making the fire are in power. They hold all three branches of power that the constitution was constructed to prevent that happening.

If there was ever a place for a brown nose to inset itself its on the face of JT.

Things are going to get a lot worse so lets no waste our time on moral superiority.

Just what does that last sentence mean, Steve?

It's not a simple case of moral superiority, Steve. It's a case of recognizing a man for who he is.

Saying ' we are not moving our embasy' seems pretty clear to me. It says , we are not following. How is that weak? Remember, the statement is for the rest of the world too, not just the US.

I agree that it's a clear line, rumley. The problem is that, with the Republican Party giving Trump whatever he wants, Trump seems to believe he can do whatever he wants. Justin is going to have to say no frequently. One wonders if both Trump and Trudeau understand that.


Steve wrote, "Lets not forget we are talking about people who are either Hezbollah or ISIS." That's an asinine comment, one for the books. How many Palestinians does he know? I'm guessing none or he would know that a great many Palestinians are affiliated with neither Hezbollah and certainly not ISIS. That's profoundly stupid and bigoted. A significant percentage of the Palestinian people were born into occupied captivity and, if Israel has anything to say about it, they'll die as captives. Take a walk around your own community and imagine that everyone you see under 50 was born into captivity.


As for Rumley's remark about Canada not being weak, he needs to take a look at Canada's voting record on Palestinian matters in the UN General Assembly under both Harper and now Trudeau. Liberal or Conservative, they're both Netanyahu's obedient lapdogs. I would be surprised if one Canadian in fifty had any idea how consistently we vote in favour of Israel to the prejudice and detriment of the Palestinians. Our voting record - the US, Canada, the Marshall Islands and a couple of other South Pacific island states (all bought and paid for) - speaks for itself. The rest of the world, including our European allies, have the courage and decency we lack. Netanyahu's only significant allies are Trump and Trudeau. We're more than weak. We're lickspittles.

Steve often deals in sweeping generalizations, Mound. So do a lot of people. In the end, because no two of us are alike, an argument based on generalization melts into the air. As for Rumley's comment, I think Trudeau deserves credit for saying Canada will not follow Trump's lead. But Justin would make a much more meaningful contribution if he came out squarely against Netanyahu's settlement building program.

Owen , you are the eternal diplomat , I say that with respect.
Canada lives in the shadow of the USA and our cross border trade is more complicated to us than; say the EU is to the USA !
None of the world of political leaders have taken Trump to task; why condemn Trudeau for not doing so?
Perhaps, one of these days, some powerful world leader will cry out that Trump has no clothes , we can only hope.
There is no such thing as punching beyond your weight , it's just an ego thing.
Canada is not a major layer on the world circuit, lets stop pretending we are and do what we can do best.

I would be surprised if one Canadian in fifty had any idea how consistently we vote in favour of Israel to the prejudice and detriment of the Palestinians......

One in a thousand Canadians would not realise the Palestinian situation .
One in a thousand Canadians in the East think that BC Liberals are actually Liberals.
One in a thousand Westerners do not know where Nova Scotia is on a map!!
The former is understandable, the latter not.
Such is life when the average Canadian, American or Brit can reel off the names of contestants on a reality show whilst thinking Netanyahu is a basket ball player!
With such ignorance how do you expect the public to put pressure upon our politicians and effect change?

Living under the shadow of the USA, Trudeau has no influence with our major trading partner.
Picking a fight with Trump could inflict more problems upon Canada and for no change in the end result.
Trump is determined to use his executive powers to bolster his own ego ; we, Canada, could well fall foul of it.
Better a cautious approach( if that is what it is) than a bold one.
David and Goliath is likely fairy tale!!
I don't doubt that the Asper syndrome has some effect but we have no information to prove such!!!

.. I keep seeing ZERO consultation of the Canadian people.. the electorate upon these matters. I don't mean polls either. I don't mean The Liberal Caucus either.. We had no knock on our door by a breathless MP or their surrogate, asking for our thoughts on Jerusalem, or a pipeline through our backyard for that matter

There seems an add phenomena arising over the last 15 years.. & yes, that would ecompass the Harper Era plus the young middle aged Trudeau era.. a phenomena whereby 'government' is not at all interested, or responsible.. to who put them into their jobs in the first place.

Truly speaking.. I don't give a shit.. about where the American embassy is in Israel. My lovely fiancee cares even less, in far more derogatory tems I would fear to print.. and she is the more informed & determined of the two of us. Do we both care what Israel is about in Palestine? Yes & Yes.. Israel is twisting itself into a cancerous dangerous form.. and one could say.. Judaism is doing exactly the same.

Hell n Brimstone.. Canada.. we can't face up to the grim reality of Canada & our First Nations.. or our f'n Environment getting trashed to feed the economy of Asia.. but we can afford to opine or donate to Israel.. touch our forelock.. or give it the time of day ? We can't call apartheid? What gives?

We see what I call 'factional warfare' everywhere.. discrimination.. genocidal war.. religious factions warring on each other. Our Jesus is better than yours.. Nothin new there, folks.. been goin on forever. But as land, space, water, soil become more and more scarce commodities.. Canada will be the last n final 'redoubt' .. no polar bears or orca, no caribou or samon or eagle of course.. and ragtag old ISIS vets will begin to drift here.. the remnants of environmental catastrophies too.. those trying to escape radiated territories will arrive.. boat people from overpopulated and dying Asia with no water.. drought.. frightened 'normal' Americans too.. more Micks n Brits.. Dutchies flooded out

As Mound likes to say.. the 'tipping point' ..
So where do the people fall when the earth or reality tips ?

The only thing we can count on, TB, is that Trump will be boarish -- every day, all the time. Other than that, he's totally unpredictable. That makes him very hard to deal with.

I agree with Mound, salamander. We're at a tipping point. And the only thing I know for sure is that tribalism will not be our salvation.

Trudeau is in a tight spot, TB. Further evidence of that came in Trump's speech in Florida. Justin can say no and Trump doesn't listen. In fact, he doesn't listen to anybody who tells him no. My sense is that Justin will eventually call Trump a fool and walk away. It would be helpful if Robert Mueller would confirm Trump's folly.

Trudeau is in a tight spot, TB

All world leaders are in a tight spot with Trump around.
Perhaps we are at a point where the world tells the USA just what they really think about them; excusing Theresa May that is!

Even when world leaders tell Trump what they think of him, it seems to have no effect, TB. Grass doesn't grow through concrete.