She Knows How To Get Things Done 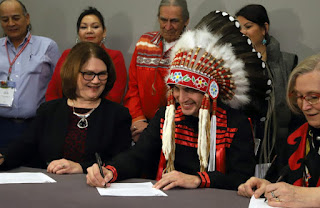 Jane Philpott has her work cut out for her. But, Tim Harper writes, she's determined to get it done:

The federal Indigenous services minister has ambitious plans when it comes to ending water quality advisories in First Nations communities, closing the gap on Indigenous child welfare spending and reducing what she calls an “abhorrent” number of Indigenous children living in foster care.

One thing not on her list for the coming year is hearing the word “no” from anyone in her department’s bureaucracy.


Unclean water on native land is a perennial problem. Philpott is determined to put an end to that problem:

As we spoke this week, Philpott sat at a desk with six multi-colour-coded spread sheets in front of her, detailing all 68 long-term drinking water advisories in communities directly funded by her department, with the dates the order went into effect, timelines for ending them and potential barriers in the way.

There are a total of 100 such advisories in First Nations communities including privately operated systems.


Also on Philpott's desk is reform of the child welfare system:

In Manitoba the rate can be as high as 90 per cent, but the rate is anywhere from 60 to 80 per cent across western Canada.

“It is positively abhorrent. There is clearly something very wrong,’’ Philpott told me.


And she is determined to improve First Nations schools:

But it is also up to Philpott to light a spark in a bureaucracy that has for years worked to thwart Indigenous progress, launching court challenges and slowing programs in the name of protecting the taxpayer.

Bureaucracies are not monolithic, as Philpott points out. They are composed of people who care and understand 150 years of injustices.

They smile, she says, when they are told to find a way to deliver a “yes,” instead of falling back on an automatic “no.”

Philpott has worked as a doctor in third world countries. She knows that conditions on Canada's reserves are third world conditions. And she knows how to get things done.

Email ThisBlogThis!Share to TwitterShare to FacebookShare to Pinterest
Labels: Philpott And The First Nations


Philpott reminds us that there is real good within the Trudeau government. You just have to know where to look.

I hope she can succeed. One thing that Harper championed with witch I agreed is transparency for the native funding. This should be true of all goverment spending. On the internet for every retired accountant who wants to increase his traffic to blog.

The fact of the matter may be that villages are not economically feasible. Three ways to make that so. First compositing toilets, this is not hippie stuff look at what Sunmar has to offer.
Second, container greenhouse, local food is the only hope to be sustainable. You can ship in frozen milk, cheese and meat. Veggies are a low hanging fruit for sustainability. Third is solar power generation. It has to be today way cheaper than desile. Flow batteries are now well proven storage for off peak generation.

I've been impressed buy Philpott from the beginning, Mound. And I get the impression that she just might strengthen Justin's spine on occasion.

My hunch is that Philpott will use modern technology to solve problems on reserves, Steve -- and respect native opinions to boot.

This might be slightly off topic but I couldn't help reflecting on past Christmas merely a few short years ago when we were witness to first nation elder who was on a hunger strike in a tee-pee. She was awaiting a visit from the rat faced prime minister who hurried off to Calgary to spend his Festive season with constituents. I only mention it as it is Christmas and I will never forget how it cemented my position on that horrid government "Ghost of christmas past". Happy Christmas and happy holidays to all.