A Crisis Of Legitimacy 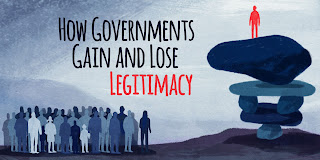 The United States is a mess. And, Frank Bruni writes, it's getting worse:

Something unsettling is going on in American politics — in America, period — and the chaotic Democratic race exemplifies it. The rules are all blurry. The processes are all suspect. Or at least they’re seen that way, so more and more judgments are up for debate and more and more defeats are prone to dispute. President Trump is a prime player in this, but it didn’t start with him and isn’t confined to him. He’s exploiting and accelerating a crisis of faith in traditions and institutions, not causing it. He’s improvising, and he’s hardly alone.

Everywhere I look: incipient or latent pandemonium. The Iowa caucuses were a mess that motivated some candidates to press self-aggrandizing grievances, and there are concerns that the Nevada caucuses are headed for the same fate. Bloomberg’s rivals argue (understandably) that he’s using his billions to game the system and pervert the whole shebang. And in a reprise of four years ago, Sanders’s supporters fume that the media, the Democratic National Committee and other supposed pillars of the establishment are conspiring against him in some underhanded, corrupt way. I’m no soothsayer, but I foresee intensifying quarrels over whether whoever is leading the field deserves to be in that position and whether his or her competitors got a raw deal.


There was pandemoniun four years ago. There's more of it now. Why?

I blame the internet, because I like to and because it’s true. I mean that I blame the way it encourages people to choose their own information and curate their own reality, so that no official pronouncement competes with a pet theory. I blame a national epidemic of selfishness, too. It seems to me that fewer and fewer people are easily moved off their particular worries, their special wants. Any outcome that displeases them is ipso facto a bastardized one.

“The refusal to grant victors legitimacy bundles together so much about America today: the coarseness of our discourse; the blind tribalism coloring our debates; the elevation of individualism far above common purpose; the ethos that everybody should and can feel like a winner on every day,” I wrote during the last presidential election, and I wondered then if this were a passing phase.


Down there, they're facing a crisis of legitimacy. And I fear that we in the North are moving in the same direction.

Like their healthcare system, Americans have always liked their elections to be expensive, time consuming, tilted towards the rich, and corrupt. The situation was made markedly worse by the Supreme Court's Citizens United decision that equated money with free speech. Legitimacy has long been a question, especially after the Supreme Court selected Bush over Gore. And the Court's refusal to intervene in partisan gerrymandering cases gives citizens no recourse against blatant political interference in elections.

Thankfully, Canada's elections are run simply, quietly and efficiently by non-partisan bodies. Harper's efforts to corrupt the system largely failed, his party was found guilty of election fraud, and one of his top lieutenants, Dean DelMastro, went to jail. I don't doubt for a moment though that next time they're in power the Cons will resume their efforts to corrupt our elections. The signs show quite clearly that increasing numbers of Conservatives no longer believe in democracy.

Ever since Harper destroyed the Progressive Conservative Party, Cap, their inspiration has come from American Republicans. John A. Macdonald wouldn't recognize these people.

From Mulroney "with bells on" to Harper with his "good-to-go", these guys and all their IDU brethren may be of slightly different types politically, practicing different types of deceit and criminality; but the one type they're not is conservative. Bob Stanfield wouldn't even recognize them. There hasn't been one of them worth a second look since the libertarians used the EBS and the Western Guard to destroy Joe Clark. And it's getting worse in Canada because in all of their sick iterations they're retuning to and being taken over by their roots.

That's precisely the problem, John. Their roots are poisonous.