That Notion Is Insane 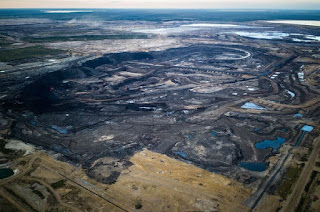 In July, The Joint Review Panel released its report on the Teck Mine in Northern Alberta. Andrew Nikiforuk writes:

Despite finding “significant adverse effects,” the panel declared that the mammoth project was in the public interest.

It added that the mine “would maximize the value of a product which is essential to everyday life” and provide income for Indigenous peoples of Alberta and Canada. Assuming, that is, oil prices reach $95 a barrel.


The price of oil is now $50 a barrel. Nonetheless, the push is on to approve the mine. And that, despite the wide reaching destruction that would be the consequence of opening the mine. The report pulls no punches about that destruction:

The project will destroy 292 square kilometres of the boreal forest, most of which is prime waterfowl habitat.

The report adds, “The project is likely to result in a significant adverse effect to biodiversity, primarily as a result of the loss of wetlands and old-growth forests.”

There will be a high to moderate loss of habitat for migratory birds whose populations are already dwindling.

According to the report, “more than 40 per cent of the old-growth forest within the regional study area will be removed and will not be recreated for more than 100 years after reclamation.”

In addition, the project “has the potential to make an incremental contribution to already existing significant adverse cumulative effects to woodland caribou.”

In its first decade of operation the project will use about 105.2 million cubic metres of water — about 100 billion liters of water, or 100 small lakes.

The project will destroy or alter fish habitat for 1.5 million square metres in the Red Clay Creek and Big Creek watersheds, as well as the Athabasca River.

It will affect the traditional land use, rights and culture of 14 First Nations.

Total greenhouse emissions are estimated at 4.1 million tonnes of CO2 equivalent a year — about the amount generated by 400,000 homes or 800,000 passenger vehicles, or one large coal-fired power plant.


Given all this destruction, there are still those who argue that the mine is a good idea. That notion is insane.

Image: The New York Times
Posted by Owen Gray at 8:56 am

Email ThisBlogThis!Share to TwitterShare to FacebookShare to Pinterest
Labels: The Teck Mine


It's Athabasca, what else can you say? One mammoth Love Canal. The Fort Chippewa band chose to go along to get along. What did they get for it? A 'cancer village' that the Alberta government first concealed, then denied, but eventually failed to prevent the truth from surfacing. Even in the south, ranchers are battling orphan wells that can leak lethal gases or poison the local groundwater.

And who will clean it up? The fossil energy giants have skillfully minimized their exposure. Why wouldn't they when the provincial government, and Ottawa, let them get away with it?

Unless they find some way to mess it up, Alberta will always have the pristine foothills and the Banff-Jasper corridor but the lowlands and the boreal north could become a patchwork of hazmat sites. And Jason Kenney's band played on.

Clearly, the Joint Review Panel's notion of the public interest is a very narrow one, Owen.

And so ends the world, Mound, where we drown in out own waste.

At what price, Lorne? Clearly, no price is too high to pay.

Some of the rich guys aren't thinking right here. They should take a little of Carl Sagan's advice. Leave it in the ground until every last little drop of the good stuff is gone. Then it'll be there to be used as fuel for the rocket ships when the richest guys decide that it's time to depart from planet earth. But then maybe there are already some strategic reserves set aside for that escape plan that, to save our silly heads from confusion, they've decided the rest of us don't need to know about.

The rich have decided, John, that there are lots of things we don't need to know about.

Its in the interest of the corporations, not this country. Some one must have looked south where they declared corporations are people. They aren't people, they're paper entities.

Given the use of water, impact on the animals and people who live in the area, I vote NO. We will see Teck wanting subsidies and infrastructure built by government. NO.

It is not in the interests of Indigenous people because we know they won't be hired. they'll only be poisoned.

We will destroy out land, Indigenous People's environment, if not ours and that is not enough to give it the go ahead. Its not in the interest of this country, unless Teck is the country. Jason isn't this country and Alberta isn't this country. They are all parts of it.

We know what abandoned wells are doing in Alberta, we don't need an open pit mine of that tar, waste of water and land. Its more economical to purchase oil from Iran, Venezula, any number of other countries, which have a better quality of oil.

But Big Oil donates to political parties, e.a.f. And Big Oil is used go getting what it wants. However, today I've read that the Trudeau government plans to link approval of the mine to green house emissions. We'll see what ensues.

Owen, I'd like the Feds to link approval of the mine to total cleanup of all those abandoned wells and the no-longer used mess at the other tar sands operations. No promises should be accepted in lieu as we know how that works. No future permit should be issued until the cleanup is completed.

An excellent suggestion, Toby. There's a lot of cleaning up to do.