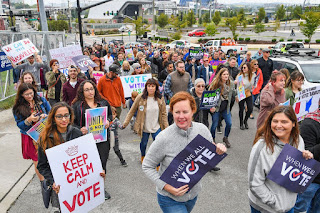 It is the young who have the greatest stake in the world we are creating -- or destroying. It is they who will live with the consequences we are setting in motion. Robin Sears writes:

There was much editorial teeth gnashing when our voting age was reduced from 21 to 18 in 1968. Teeth are grinding again about broadening the electorate once more.

The champions of the status quo ante always argue that younger citizens do not “have the judgment that can only come with age.” In reality, today’s 16-year-old probably has the policy sophistication of an 18-year-old half a century ago.

What the advocates of no change ignore is the unintended consequences of denying a nation’s youth a role in policy and governing. First, in comfortable places like Canada, they may sit out elections for years, if the habits formed in early adolescence did not include the most basic form of civic engagement, voting. In Australia’s compulsory voting system, many families go — parents, kids and all — to the polling stations.


They -- and we -- cannot afford their apathy. And their decisions are not always revolutionary:

Austria and Greece have lowered their voting ages to 16 and 17 and have elected progressive and very conservative governments in the past decade. Scotland’s voting age is 16, they just clobbered the Labour party. Pressure is rising in the U.K. to establish 16 as the threshold for all elections.


We confer the duties of citizenship on sixteen year olds:

Sixteen-year-olds can join the military reserves, drive a car, sign an employment contract, pay taxes — but not vote. They have a deeper understanding of the technology challenges they will face in the job market. In increasing numbers they are struggling to acquire the tools to survive in an era of robotic job-killing — but they have little policy voice, and no vote.

A 16-year-old surely knows more than their parents and grandparents about the accelerating power of technology. Equally, the post-internet generation knows what can never work, and what has a better chance of success. They know that a tax system that does not require tech giants to pay back to the nations that nurtured them and that now pay them enormous sums for their services, is absurd.

Considering the clowns we elect to public office how can we say 16 year olds are not mature enough to vote?

Very interesting, Owen. While I was aware that early voting helps to establish a lifelong habit, I did not that the voting age in Scotland is 16. Given the relative apathy of our electorate, lowering the enfranchisement age seems like a good way of possibly engaging more people in their own country.

Absolutely. I have long argued for lowering the voting age to 16. Something has to tear down this generational logjam.

We are still governing for the middle class/middle aged and over. Yet the decisions we make for this demographic often has quite obvious impacts and knock-on effects for our youngest people. We are writing their future and, by the time the current system allows their demographic to matter, it will be too late.

In a country where fewer than two votes out of five has delivered false majority governments who then set about brazenly reneging on their election promises leaving them with no popular mandate and leaving us to be ruled not governed, we need those extra voices to be heard.

They know what's coming. They're rightly fearful of the future we today are bequeathing them. They will face a world unlike any previously known yet we carry on as though that doesn't matter. We won't be here by then so why worry about it.

Jared Diamond, in his book "Collapse" explains how past societies destroyed themselves by making choices that produced immediate benefit while knowing quite clearly that it would doom their people in another two or three generations. It's hard to accept but that's what we are doing today.

If letting 16 year olds vote might tip the scales in their favour or somewhat less in our favour, we have no moral right to refuse.

They might do a better job than we've done, Toby.

I was struck by countries like Scotland that did lower the age, Lorne -- and the world has not come to an end.

As you say, Mound, the young can see the future -- and they should have a say in that future.

As an Albertan:
the evidence of governments elected locally (town), municipally, provincially, federally and internationally is almost absolute proof
that we are incapable of self governance
in the face of "interest groups"

“Voice of the People” column published in the Lowell Sun in September 1976 and written by Robert S. Borden:
“Has it ever dawned on the editors that the attitudes of the 70 million projected non-voters may be very consistent with the reality that the concept of voting and electing representatives is basically dishonest and fraudulent. If voting could change anything it would be made illegal! There is no way any politicians can legally represent anyone because he was elected on a secret ballot by a small percentage of voters. He then claims to represent the people who voted against him and even those who wisely chose not to participate in such criminal activity.”

give 12 year olds the vote
give a family of 7, seven votes
remove the vote at the age of 50
i think it is great folly to think that there will be any less susceptibility to the to the delusion, prejudice, lack of information and hypnosis that affect those already voting
ergo the result will be exactly the same
the answer lies elsewhere
a political and economic competence test to vote would be way more effective
as would direct voting, after passing, on issues not meatsacks.
wouldn't it be refreshing to deal with issues rather than politicians?

Human stupidity knows no age restriction, lungta. But I still maintain that those who will live in the future should have some say in how that future develops.

Better to allow the teenagers who would take the time and trouble to consider the issues to vote than to waste our time bemoaning the turnouts of those who already can but won't bother themselves to. Anyway, if they're anything like the hip-eyes, the teens who survive and aren't on welfare will be good libertarians before they leave their twenties behind.

There's really no telling what philosophy they will champion, John. But, if they have skin in the game, their decision could affect the eventual oucome. Let's hope it will be for the better.

.. Identify the key words that are synonyms of 'Deter' .. ie Defy or Defeat, Deflect, Disallow etc. There you go ! Now put them in the context of Election Fraud & the reality of the Never Ending Campaign. Corrupt and Captured political Parties in North America utilize every tool in their black ops toolbox to Deter voters highly unlikely to vote for corrupt Party candidates .. especially to protect their incumbents, but also to swing closely contested electoral districts.

Still with me ? OK .. here is this morning's post from Norm, over at Insights https://in-sights.ca/2020/02/16/delusion-deception-inertia/ .. Examine the reality he portrays in BC. Does one really expect a younger non-entrenched or even non partisan voter to support the status quo Norm portrays ? Or a young voter supporting a Political Party or Government or Candidate espousing or defending that status quo ? I think not.

The teeter is tottering .. as the boom generation ages, becomes disillusioned or apathetic, the Canadian 'Conservatives' and the American Republicans certainly do not want young voters to replace elderly and evangelical voters.. or those thoughless voters who simply fell into voting 'conservative' like their dad or grandad always did.

Its always interesting to see the results of 'mock elections' held in primary, high school classrooms or at schools of higher education. Not to mention the explanations or considerations of 'the young vote'.. My suspicion ? Well uh.. last time anyone ever saw a 'story' via captured sold out MainMedia like PostMedia.. or via the Conservative Party of Canada or provincial counterparts like the UCP. The sold out BC NDP under John Horgan certainly won't want to promote or provoke 'the Young Vote' ..

And always keep in mind that Canadian's personal, private and any voting preference data held and utilized by Political Parties is for one purpose only. To optimize by any means, controlling, massaging, grooming, manipulating deterring the vote as required. By law, such data in the hands of 'our' Political Parties is unaccountable, non-transparent and inaccessible to those whose data has been acquired by ANY MEANS ..